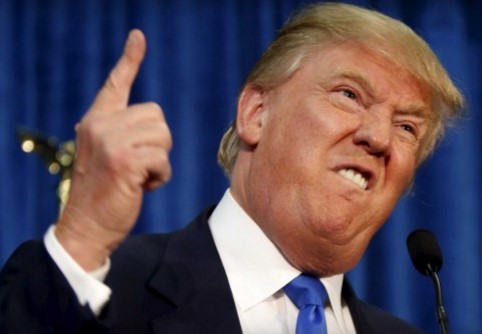 Politicians here in the US aren’t generally known for embracing modern technology. Senator Lindsey Graham (R-SC) publicly boasted this year that he’s never sent an email. Senators Chuck Schumer (D-NY) and John McCain (R-AZ) said they only check it every few months. From the “series of tubes” meme to Representative Jim Barton’s (R-TX) proposal that the FCC be given the power to shut down social media sites if terrorists are found to use them, there’s no shortage of tech-ignorant politicians.

Donald Trump, however, may be in a class of his own. In a speech in South Carolina yesterday, the Republican presidential candidate laid out one facet of his plan for preventing homegrown terrorism and radicalization:

“We’re losing a lot of people because of the Internet and we have to do something. We have to go see Bill Gates and a lot of different people that really understand what’s happening. We have to talk to them, maybe in certain areas closing that Internet up in some way.

It’s worth noting that Trump’s claim that “thousands” of Americans have joined Daesh (often referred to as ISIS or ISIL) is a significant exaggeration. In July 2015, FBI Director James Comey testified before Congress that roughly 200 Americans had attempted to join the terrorist organization. The majority of Westerners who have fought in Syria have been European citizens, with an estimated 4,000 Europeans joining the war thus far.

The larger issue, of course, is Trump’s assertion that we can “close up the Internet” with or without Bill Gates’ assistance. There is no magical method of separating lawless and lawful behavior at such scales, at least not without fundamentally overhauling both the US constitution and the Internet itself.

Trump has based his campaign on big ideas, not specific policy recommendations. His campaign rhetoric hammers broad themes and promises to look into and deal with various problems, but doesn’t offer much in the way of concrete proposals. What’s striking about this particular one, however, is that there’s no way to read that sentence that doesn’t conflict with the fundamental structure of the Internet — and of American law. Does he mean closing the Internet to individuals? To organizations? To traffic from other countries? Should social media sites like Facebook and YouTube be responsible for actively policing every post and comment for anything that might be deemed subversive? If they found such content, what steps would be taken to “close down” the people who made the statements in the first place?

What’s particularly frustrating about these types of proposals is that the same politicians who call for policies that would effectively destroy the modern Internet will stand up and praise the innovation and drive of firms like Google, Amazon, and Facebook. The idea that the structure and design of the former is partly responsible for the success of the latter is rarely given a passing thought.

We need candidates who understand the modern Internet, at least superficially. Hopefully that’s something everyone can agree on, no matter where you land on the political spectrum.