We can disclose that a twin explosion has rocked the Nigeria Police headquarter, also known as Louis Edet House, in Abuja. The explosion, which occurred at 10.45 a.m., has razed the building which is considered

to be one of the safest and most secured in the country. An eye witness, who spoke to our correspondent, said, that a car with four people drove into the force headquarters with the aim ramming into the building. However, their luck ran out, when the bomb detonated prematurely missing its target, and killing the suicide bombers.


Our checks reveal that yesterday, Boko Haram, the group alleged to have carried out the attack, issued a statement, which was ignored by NPF.Excerpt of the statement reads: "Our jihadists have arrived in Nigeria from Somalia where they received real training on warfare from our brethren who made that country ungovernable"

The full text of the statement which emanated from "Jama'atu Ahlis-sunnah lidda'ati wal Jihad", another acronym for the sect, said:

"Dialogue with President (Goodluck) Jonathan has collapsed," because of the statements made by the inspector general of police and governor of  Borno state".

It said it was infuriated by the Inspector general of police, Hafiz Ringim's declaration that "the days of Boko Haram are numbered". 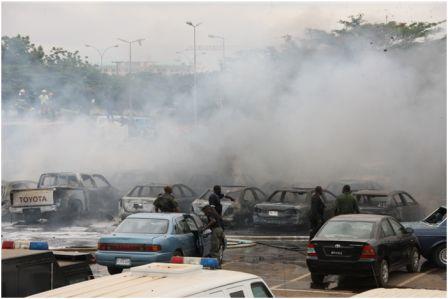 "Our jihadists have arrived in Nigeria from Somalia where they received real training on warfare from our brethren who made that country ungovernable".

“This time round, our attacks will be fiercer and wider than they have been," it said, adding it will target all northern states and the country's capital Abuja”.

However, Yushau Shuaibu, spokeperson of the National Emergency Management Agency, , said emergency response teams has been  mobilized to the scene of the explosion.

His SMS to the media reads:, , ”NEMA has successfully cordoned off the parking lot of the police headquarters. A suspected bomber died in the incident. Many vehicles were destroyed.” 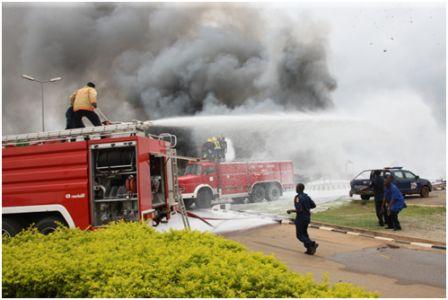 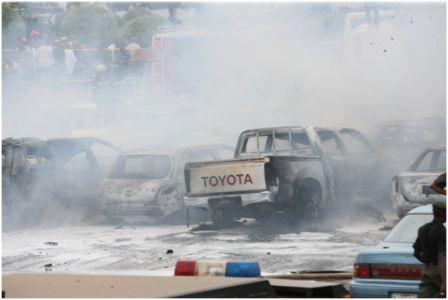 Permalink Reply by Olalekan Adeyinka on June 17, 2011 at 12:33pm
THE GOVERNMENT OF THE DAY AND EVERY NIGERIANS SHOULD WAKE UP AND TACKLE THIS. DEMONIC TREND.NIGERIANS WANTS TO KNOW WHO IS IN CHARGE OF THIS COUNTRY THE FEDERAL GOVERNMENT OR BOKO HARAM?

Permalink Reply by Dammyscurry on June 17, 2011 at 2:32pm
I think this is the high time we should know who our enemies are, i can see Big bro Ojukwu has a reason for biafra war.its could have been a better settlement for the 3 part of the country to go on there seperate ways without killing eachother now. The Hausa are evil.......

May God help us.

Permalink Reply by Moses K Tawose on June 17, 2011 at 3:57pm
Nigerians must rise up to the task and every information would help to thwart this assualt on our nation. We must be beyond ethnicity or North, East,West and South or be tribalistic as regard. It's a fight for all~~~~!!!

this is slap on NPF. if this can happen to the headquarter. A PLACE WE BELIEVED TO BE A SAFER ARENA ..........., individual houses are battle field for crime. Is there not A.I specialist in the force? but to harras civilian in their area of specialization. How much BOMB DETECTOR or AN INFRA-RED CAMERA that the force can't buy out of the daily budget of the nation on SECURITY. I will advice you guys to watch 24 hours season[film] using CTU as CASE STUDY.

Permalink Reply by Dan WebNutritionist/Motivator on June 17, 2011 at 5:32pm

I knew we would get here eventually.It's time for Nigeria to sit up and stop fooling around.We have to know the real culprits.Not just a faceless,nameless Boko Harram.

The split issue.....I dont know what to say! I think it may be the only alternative we will be left with but we must not be in a hurry to do it.

Permalink Reply by olalekan afolabi on June 17, 2011 at 6:53pm
please what on earth is this ,if not a slum or sorry a country where nothing is working ,including our useless police force,na only bribe den sabi collect

The Federal Government should invite Abubakar Atiku and his so-called northern elites and query them for the bombimg, they are the one using the Boko haram's name.