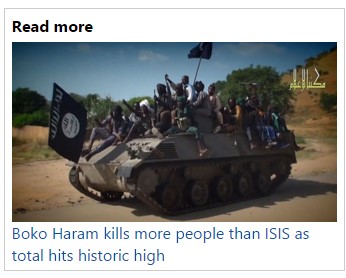 Nigeria’s Boko Haram is now officially the deadliest terror group in the world. That they have reached this position is a direct consequence of Cameron and Co’s war on Libya – and one that was perhaps not entirely unintended.

According to a report just released by Global Terrorism Index, Boko Haram were responsible for 6,644 deaths in 2014, compared to 6,073 attributed to ISIS, representing a quadrupling of their total killings in 2013. In the past week alone, bombings conducted by the group have killed eight people on a bus in Maiduguri; a family of five in Fotokol, Cameroon; fifteen people in a crowded marketplace in Kano; and thirty-two people outside a mosque in Yola.

In 2009, the year they took up arms, Boko Haram had nothing like the capacity to mount such operations, and their equipment remained primitive; but by 2011, that had begun to change. As Peter Weber noted in The Week, their weapons“shifted from relatively cheap AK-47s in the early days of its post-2009 embrace of violence to desert-ready combat vehicles and anti-aircraft/ anti-tank guns”. This dramatic turnaround in the group’s access to materiel was the direct result of NATO’s war on Libya. A UN report published in early 2012 warned that “large quantities of weapons and ammunition from Libyan stockpiles were smuggled into the Sahel region”, including “rocket-propelled grenades, machine guns with anti-aircraft visors, automatic rifles, ammunition, grenades, explosives (Semtex), and light anti-aircraft artillery (light caliber bi-tubes) mounted on vehicles”, and probably also more advanced weapons such as surface-to-air missiles and MANPADS (man-portable air-defense systems).

NATO had effectively turned over the entire armory of an advanced industrial state to the region’s most sectarian militias: groups such as the Libyan Islamic Fighting Group, Al Qaeda in the Islamic Maghreb and Boko Haram.

The earliest casualty of NATO’s war outside Libya was Mali. Taureg fighters who had worked in Gaddafi’s security forces fled Libya soon after Gaddafi’s government was overthrown, and mounted an insurgency in Northern Mali. They in turn were overthrown, however, by Al Qaeda’s regional affiliates - flush with Libyan weaponry - who then turned Northern Mali into another base from which to train and launch attacks. Boko Haram was a key beneficiary. AS Brendan O’ Neill wrote in an excellent 2014 article worth quoting at length: “Boko Haram benefited enormously from the vacuum created in once-peaceful northern Mali following the West’s ousting of Gaddafi.

In two ways: first, it honed its guerrilla skills by fighting alongside more practiced Islamists in Mali, such as AQIM; and second, it accumulated some of the estimated 15,000 pieces of Libyan military hardware and weaponry that leaked across the country’s borders following the sweeping aside of Gaddafi. In April 2012, Agence France-Presse reported that ‘dozens of Boko Haram fighters’ were assisting AQIM and others in northern Mali. This had a devastating knock-on effect in Nigeria. As the Washington Post reported in early 2013, ‘The Islamist insurgency in northern Nigeria has entered a more violent phase as militants return to the fight with sophisticated weaponry and tactics learned on the battlefields of nearby Mali’. A Nigerian analyst said ‘Boko Haram’s level of audacity was high [in late 2012]’, immediately following the movement of some of its militants to the Mali region.”

That NATO’s Libya war would have such consequences was both thoroughly predictable, and widely predicted. As early as June 2011, African Union Chairman Jean Ping warned NATO that “Africa’s concern is that weapons that are delivered to one side or another…are already in the desert and will arm terrorists and fuel trafficking”. And both Mali and Algeria strongly opposed NATO’s destruction of Libya precisely because of the massive destabilization it would bring to the region. They argued, wrote O’Neill, “that such a violent upheaval in a region like north Africa could have potentially catastrophic consequences. The fallout from the bombing is ‘a real source of concern’, said the rulers of Mali in October 2011. In fact, as the BBC reported, they had been arguing since ‘the start of the conflict in Libya’ – that is, since the civil conflict between Benghazi-based militants and Gaddafi began – that ‘the fall of Gaddafi would have a destabilizing effect in the region’.” In an op-ed following the collapse of Northern Mali, a former Chief of Staff of UK land forces, Major-General Jonathan Shaw, wrote that Colonel Gaddafi was a “lynchpin” of the “informal Sahel security plan”, whose removal therefore led to a foreseeable collapse of security across the entire region. The rise of Boko Haram has been but one result – and not without strategic benefits for the West.

Nigeria was once seen by the US as one of its most dependable allies on the African continent. Yet, following a pattern that is repeated across the entire global South, in recent years the country has been moving ever closer to China. The headline grabbing deal was the $23 billion contract signed in 2010 with the Chinese to construct three fuel refineries, adding an extra 750,000 barrels per day to Nigeria’s oil producing capacity. This was followed up in 2013 with an agreement to increase Nigerian oil exports to China tenfold by 2015 (from 20,000 to 200,000 barrels per day). But China’s economic interests go far beyond that.

A Nigerian diplomat interviewed by China-Africa specialist Deborah Brautigam told her that “The Chinese are trying to get involved in every sector of our economy. If you look at the West, it’s oil, oil, oil and nothing else.” In 2006, China issued an $8.3billion low-interest loan to Nigeria to fund the building of a major new railway, and the following year China built a telecommunications satellite for Nigeria. Indeed, of last year’s $18 billion worth of bilateral trade between the two countries, over 88% was in the non-petroleum sector, and by 2012 Nigerian imports from China (it’s biggest import partner) totaled more than that of its second and third biggest import partners, the US and India, combined. This kind of trade and investment is of the type that is seriously aiding Africa’s ability to add value to its products – and is thereby undermining the Western global economic order, which relies on Africa remaining an under-developed exporter of cheap raw materials.

Not has China’s co-operation been limited to economics. In 2004, China supported Nigeria’s bid for a seat on the UN Security Council, and in 2006, Nigeria signed a Memorandum of Understanding on the Establishment of a Strategic Partnership with China – the first African country to do so. It is a partnership with a solid base of support – according to a BBC poll conducted in 2011, 85 percent of Nigerians have a positive view of China; perhaps not surprising when even pro-US security think-tanks like the Jamestown Foundation admit that “China’s links with Nigeria are qualitatively different from the West’s, and as a result, may potentially produce benefits for the ordinary people of Nigeria”. Symbolizing the importance of the relationship, current Chinese Premier Li Keqiang made Nigeria his first foreign destination after taking up the role in 2013.

This growing South-South co-operation is not viewed positively by the US, which is witnessing what it once saw as a dependable client state edge increasingly out of its orbit. The African Oil Policy Initiative Group – a consortium of US Congressmen, military officials and energy lobbyists – had already concluded in a 2002 report that China was a rival of the US for influence in West Africa that would need to be deterred by military means, and China has been increasingly viewed by US policymakers as a strategic threat to be contained militarily ever since. A report by US Chief of Staff Martin Dempsey just this July highlighted China as one of the major ‘security threats’ to US domination, for example - although Obama’s ‘Pivot to Asia’ policy had already made this clear back in 2013.

Is it such a stretch, then, to think that the US might actually want to cripple its strategic rival, China, by destabilizing her allies, such as Nigeria? After all, despite continued US links to Nigeria, it is China, more than any other foreign partner, who has the most to lose from the Boko Hara insurgency, as the Jamestown Foundation makes clear:“Unlike most other foreign actors in the country, [the Chinese] are investing in fixed assets, such as refineries and factories, with the intention of developing a long-term economic relationship. Consequently, stability and good governance in Nigeria is advantageous for Beijing because it is the only way to guarantee that Chinese interests are protected”.

If the US increasingly sees its own strategy in terms of undermining Chinese interests – and there is every sign that it does – the corollary of this statement is surely that instability in Nigeria is the only way to guarantee that Chinese interests are threatened – and, therefore, that US strategic goals are served. The US’s lackluster efforts in backing Nigerian efforts against Boko Haram - from blocking arms deliveries last year, to funding the fight in all of Nigeria’s neighbors, but not Nigeria itself – as well as its suspension of Nigerian crude oil imports from July 2014 (“a decision that helped plunge Nigeria into one of its most severe financial crises”, according to one national daily) would certainly indicate that.