A video released by Nigerian Islamist group Boko Haram appears to show some of the schoolgirls kidnapped two years ago from the town of Chibok. 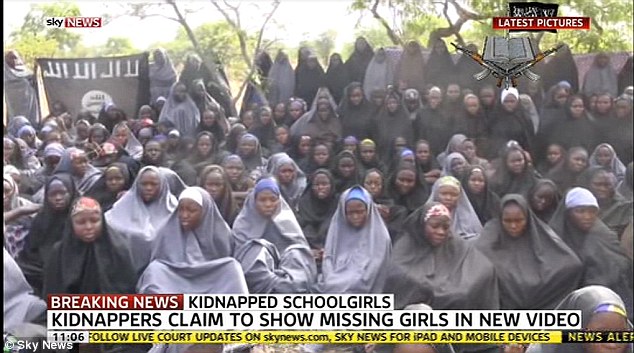 The video, apparently filmed in December, was sent to the Nigerian government and shows 15 girls in black robes identifying themselves as pupils abducted from the school.

Some of those filmed have been identified by their parents.

It is the first footage of the girls to be seen since May 2014.

The kidnapping of the 276 girls triggered the global social media campaign #BringBackOurGirls, involving US first lady Michelle Obama and a host of celebrities.

But despite their efforts, most of the girls are still missing.

Meanwhile, hundreds of parents are due to hold a march in the Nigerian capital, Abuja, to demand the government does more to find their daughters.

The BBC's Martin Patience in Abuja says they blame the previous government for doing nothing when the abduction took place and now the current administration for failing to devote enough resources to the search.

Boko Haram militants attacked the government boarding school in Borno state on 14 April 2014, seizing the girls who had gone there to take exams.

Shortly afterwards they released a video of them and demanded a prisoner exchange.

The video is too short for any meaningful comment on the state of health of the girls, but the 15 that appeared looked well fed and do not seem to show any sign of distress. However, their captors may have selected them from among the 219 girls still in captivity specifically to give that impression.

It has always been clear that Boko Haram regard the Chibok girls as high-value and a potential negotiating tool. In the past they have indicated their desire to exchange some of the girls with some of their commanders arrested by the government.

Recently, the military authorities in Nigeria have been claiming victory over the insurgents, pointing to the destruction of various militant camps spread across the group's stronghold in north-eastern Nigeria and the killing of many members of the group.

However the video indicates that despite these successes, the group has been able to hold secure locations where they can hide the girls, even if only in small groups.

These safe havens might provide many of the group's leadership an environment in which they can lie low and regroup at a later time, as they did after the premature victory declared by the Nigerian government against Boko Haram in 2009.

The video has however raised other questions as to how talks are proceeding over the girls' release - what is the motive for releasing the video to a media house in the middle of negotiations that have the trust of all involved?

Boko Haram's leader, Abubakar Shekau, said the girls had converted to Islam and he threatened to force them into marriage with his fighters or sell them into slavery.

As the months passed, about 57 students managed to escape but at least 219 are still missing.


The latest video, apparently filmed on Christmas Day 2015 and now broadcast on CNN, shows the girls pleading with the Nigerian government to co-operate with militants on their release.

They said they were being treated well but wanted to be with their families.

Two mothers, Rifkatu Ayuba and Mary Ishaya, said they recognised their daughters in the video while a third mother, Yana Galang, identified five of the missing girls, Reuters reported.

They were shown the video at a screening organised by local officials in Maiduguri, capital of Borno state.

"They were definitely our daughters... all we want is for the government to bring back our girls," said Mrs Galang.