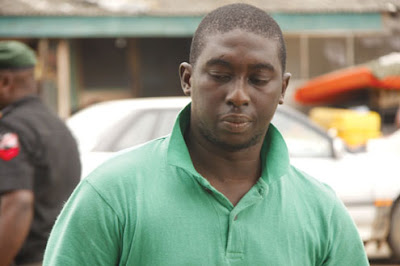 Akolade Arowolo, the man, who allegedly stabbed his 29-year-old banker wife, Titilayo, to death on June 24, 2011, may have used two knives and a hammer to carry out the dastardly act.

Titilayo's family lawyer, Mr. Nelson Ekoh, who made the claim, told PUNCH METRO, that the deceased was stabbed more than 20 times in the head and face. Ekeh added that the killing had a ritual undertone as one of Titilayo's internal organs was found at the scene of the crime.

The lawyer, who is also the spokesman for the family of the late banker, described the murder as a crime carried out by a depraved mind. 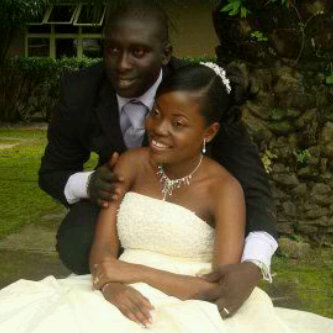 He said, "Although we cannot say what transpired between the couple exactly, I suspect that Akolade wanted to use Titilayo for a ritual purpose. At their home at 8, Dr. Akindehinde Street, Isolo, Lagos, an internal organ was found on the floor, her eyes almost gouged out and there are so many stab wounds on her body. There are about 20 stab wounds in her head and face alone while there are several other stab wounds on other parts of her body.

"Akolade used two knives and a hammer to kill Titilayo. One knife broke in her neck, while the other one was left near her corpse. I believe he pinned her down to the floor and stabbed her to death after which he took out some of her internal organs."

Meanwhile, the murder of the banker has continued to puzzle family, friends and members of the public.

Our correspondent, who visited the Ifako home of the deceased's family on Saturday, observed that sympathisers came in droves to visit and pay condolence to Titilayo's family.

The slain banker's father, Mr. George Oyakhire, who is a senior employee of the Nigerian Customs Service, has left his duty post in Kano upon hearing the murder of his daughter. He, however, declined comment but directed our correspondent to the family's spokesman.

PUNCH METRO gathered that the family was yet to make funeral arrangements as the autopsy report had not yet been released.

A close relative of Titilayo, who craved anonymity, told PUNCH METRO that Titilayo had a bright future ahead of her but regretted that with her murder, the family would never be the same again.

She said, "Titilayo graduated from Ambrose Alli University, Ekpoma, Edo State, with a good grade in History and International Relations around 2006. She just turned 29 on April 19 and her life was on the track.

"Thankfully, on the day she was murdered, her daughter was here with us and she will remain here with us. We will continue to take care of her."

When asked if the family was aware of any domestic abuse, the relative said on many occasions, Titilayo had come to report to them that Akolade was abusing her and just a few weeks ago, they helped them to settle a fight.

"Some weeks ago, after he had beaten her, Titilayo came to our house and my father warned her not to go back. But after Akolade's family came to plead on his behalf, she went back to him, against our father's advice," she said.

PUNCH METRO gathered that although Akolade had been arrested by the police, the family was dissatisfied with the manner in which the Aswani Police Station handled the case.

Ekoh, who doubles as the family's lawyer and spokesman, faulted the preliminary investigation by the police.

He said, "I'm very happy with the manner in which the State Criminal Investigation Department, Homicide Section, Panti, is handling the case. However, the Aswani Police Station did a poor job.

"The murder occurred between 12noon and 1pm. Akolade was said to have been driving against traffic when the traffic officials on duty stopped him. He alighted from his car and attempted to run but was knocked down by a vehicle.

"The officers on duty then radioed the police station when he suddenly got up, flagged down a bike and fled the scene, leaving his car. However this cannot be correct because when I saw the suspect days later, he did not look like someone that had been hit by a car.

"When I visited the police station on Sunday evening, I was prevented from taking pictures of the car but the officers on duty told me that Akolade was still at large. On Monday, I was told that he had been arrested and taken to Panti.

"On Tuesday morning, we went to the crime scene where we took photographs. At the scene, we saw an internal organ on the floor. From there we went to the police station to inspect the car which is a blue Honda Accord 2001 model with registration number, Lagos RK129-KJA

"On inspecting the car, we observed blood smear on the dash board, steering wheel, driver's arm rest, passenger seat, and a blood-soaked N100 note, as well as a Bible.

"When I asked the IPO, Mr. Cletus, how the car was retrieved and if there was a report on how the car was recovered, he and his colleagues said we should not bother about the investigation since Akolade had been arrested.

"I then told them that their testimonies would be needed in order to strengthen the prosecution's case, only for them to now change their initial statement that the car was abandoned somewhere and a radio message came in.

"Also, the report of Akolade's arrest is flawed. Akolade was not arrested at home because the neighbours and even the security guard claimed not to have seen him since the incident occurred. This is another question the police need to answer."

In a petition addressed to the Commissioner of Police, Lagos State Command, Mr. Yakubu Alkali, titled "Material concealment in the whereabouts of a murder suspect immediately the act was committed," dated June 28, 2011; the family demanded an immediate seizure of the entry evidencing recovery of the Akolade's car from the IPO.

They also demanded information surrounding the recovery of the suspect's car with the aim of ascertaining the role played by the traffic officers who allowed Akolade to escape on a bike after being hit by an oncoming vehicle; and the whereabouts of Akolade between the period of 1pm on Friday, June 24, 2011 till Monday, June 27, 2011 when he was arrested.

Ekoh added that it was imperative that the police provided adequate information as neighbours of the deceased were reluctant to testify in court.

Permalink Reply by Segun Ogunyannwo on July 10, 2011 at 9:56am
This is shocking and very disturbing. When a man who vowed 'to love and to cherish' can do this to his wife, I believe he must have been under some Satanic influence. May God forgive him.

It is also a lesson for women who are battered. Your lives may be at stake. Since the marriage vow ends at death ('till death do us part'), you can foresee the 'DEATH' and 'PART' ways with him before the 'actual'.
Jesus did not foresee such heinous and dastardly acts when He gave instructions that ONLY on account of fornication can a man/women leave his/her spouse.

May God forgive him. We cannot forgive him as a recurrence is very likely.

May God grant the family the fortitude to bear this sad loss.

It is sad. Very sad.