ABUJA — SENATE President David Mark, yesterday, said the National Assembly would create additional states, just as he stressed that the move was desirable for the country as it would help address marginalisation.

Meanwhile, in a statement by his Special Adviser on Media and Publicity, Mr Kola Ologbondiyan, Mark condemned the renewed attack against places of worship particularly the attack on St. Rita’s Catholic Church, Kaduna, yesterday, adding that it was never too late for perpetrators of the dastardly act to repent from their sinful acts against God. 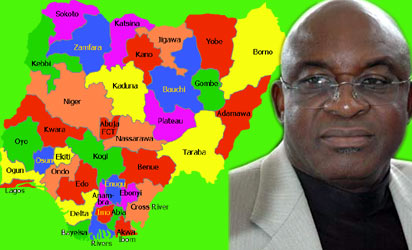 Mark, who spoke at the Ojude-Oba Festival 2012  in Ijebu-Ode, Ogun State, expressed support for the agitation for the creation of Ijebu State out of the present Ogun State, noting that new states would address the issue of marginalisation being canvassed in many parts of the country today.

Describing this year’s edition of Ojude-Oba festival as a thanksgiving for the good health of Oba Sikiru Adetona, the Awujale of Ijebuland, Mark said as a nation of diverse cultures, we must take advantage of our diversity by using our culture as a symbol of unity.

He urged Nigerians to come together and emphasise those things that bind us together as a nation.

Earlier, Governor Ibikunle Amosun of Ogun State who commended the bond of unity among the indigenes and residents of the state, assured that his administration would continue to work for the development of Ogun State and her people.

In his welcome address, Oba Adetona urged the National Assembly to address the alleged injustice against Ijebu people by ensuring the creation of Ijebu State, arguing that Ijebu was one of the original 24 provinces of Nigeria that is yet to become a state.

He said: “We have been on this issue of creation of Ijebu State since 1975. The justification for it is abundantly clear. The most worrisome aspect of it was the total neglect of Ijebu community in the state creation exercises that have taken place.

“It is lamentable that Ijebu, which in the colonial era was one of the 24 provinces that made up Nigeria, cannot today boast of being counted as one of the 36 states that presently constitute the country.”