Many have Claimed they have found a Cure . A Few Days ago A Nigerian Pastor Came up with that Claim but in 1999 A possible cure was found and later abandoned .. but Today The Australian doctor at the front line of the battle to contain the global Ebola virus outbreak

He is the Australian scientist tasked with trying to find a cure for the deadly Ebola virus that has wreaked havoc across Africa and prompted fears of a global outbreak. The death of an American citizen from Ebola last week has sparked alarm across the globe after he was able to board an international flight while carrying the incurable disease – potentially infecting other passengers who could fly across the world.

Decontee learned he was ill with Ebola on Thursday and then on Friday she was told her husband of six years had passed away from the virus.

Distraught, Decontee said that she had come forward to share her husband's fate so that the public can understand how quickly the virus can spread.

'Patrick was coming here. What if he still wasn't displaying symptoms yet and came?' Sawyer asked, according to the Pioneer Press.

'He could have brought Ebola here. Someone else could bring Ebola here.'

Health experts say it is unlikely Sawyer could have infected others with the virus that can cause victims to bleed from the eyes, mouth and ears.

Still, unsettling questions remain: How could a man whose sister recently died from Ebola manage to board a plane leaving the country?

And worse: Could Ebola become the latest disease to be spread by international air travel?

The risk of travelers contracting Ebola is considered low because it requires direct contact with bodily fluids or secretions such as urine, blood, sweat or saliva, experts say.

Patients are contagious only once the disease has progressed to the point they show symptoms, according to the World Health Organisation - and the most vulnerable are health care workers and relatives who come in much closer contact with the sick.

Still, witnesses say Sawyer, a Liberian Finance Ministry employee en route to a conference in Nigeria, was vomiting and had diarrhea aboard at least one of his flights with some 50 other passengers aboard. Ebola can be contracted from traces of feces or vomit, experts say.

Sawyer was immediately quarantined upon arrival in Lagos - a city of 21 million people - and Nigerian authorities say his fellow travelers were advised of Ebola's symptoms and then were allowed to leave. The incubation period can be as long as 21 days, meaning anyone infected may not fall ill for several weeks.

That may prove impossible, given that other passengers journeyed on to dozens of other cities.

Article Below was First Published in 1999 on bbc 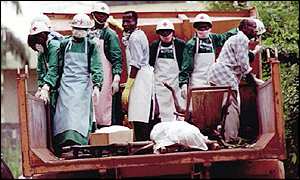 Four out of five people who get infected die

A plant has been found to halt the deadly Ebola virus in its tracks in laboratory tests, scientists have said.

They used a compound from Garcinia kola, a plant commonly eaten in West Africa. Compounds from the plant have also proved effective against some strains of flu.

If the anti-Ebola compound proves successful in animal and human trials, it will be the first medicine to successfully treat the virus that causes Ebola haemorrhagic fever - an often-fatal condition.

The discovery was announced at the 16th International Botanical Congress in St Louis in the US.

The Ebola virus was first documented in 1976 after an outbreak in Zaire - now the Democratic Republic of the Congo - where 88% of the 318 human cases died.

There are four types of the virus - Ebola-Zaire, Ebola-Sudan and Ebola-Ivory Coast all affect humans, while Ebola-Reston has so far only affected monkeys and chimpanzees.

However, doctors have been unable to stop the virus once infection has taken hold - hence the disease has gained a terrifying reputation.

Dr Maurice Iwu, who set up and heads the Bioresources Development and Conservation Programme, led the research.

It started 10 years ago when researchers were led to the plant by traditional native healers who have used the plant for the treatment of infectious diseases for centuries.

"This is a very exciting discovery," said Dr Iwu, who himself comes originally from a family of traditional healers.

"The same forest that yields the dreaded Ebola virus could be a source of the cure."

The virus multiplies rapidly in the human body and quickly overwhelms it, and in advanced cases the patient develops high fever and severe bleeding.

The Garcinia kola compound has been shown to halt multiplication of the virus in the laboratory. If repeated in humans, this would give the body a chance to fight off the virus.

The active compound is what is known as a dimeric flavonoid, which is two flavonoid molecules fused together.

Flavonoids are non-toxic and can be found in orange and lemon rinds as well as the colourings of other plants.

The tests are in the early stages still, but the researchers hope that if they continue to prove successful the compound the US Food and Drug Administration will put it on a fast track - making a drug available to humans within a matter of years.

"The discovery of these important properties in a simple compound - flavonoids - was very surprising," said Dr Iwu.

"The structure of this compound lends itself to modification, so it provides a template for future work.

"Even if this particular drug does not succeed through the whole drug approval process, we can use it to construct a new drug for this deadly disease."

FG Maintains No Record Of Omicron Variant In Nigeria Yet

FULL LIST: Messi And Other Winners At 2021 Ballon d’Or Awards