Major-General Peter Ademokhai has been kidnapped and now freed 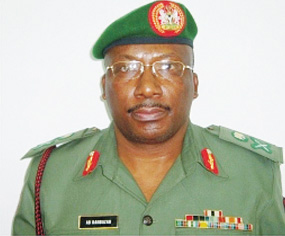 , has been released by his abductors.

Ademokhai, who spoke with journalists at his residence in GRA Benin, the Edo State capital, said he was released after an undisclosed amount was paid to his abductors. The retired general, who declined to state the amount, said his kidnappers treated him well.

Ademokhai said that one of the kidnappers told him that he had N60 million in his bank account. The retired general blamed the regulators of the banking system for not making laws to reveal the owners of bank accounts.

Ademokhai, who was looking ruffled, said he was kidnapped in the presence of his wife, adding, ”I felt as if I was in Somalia because Somalia is a failed state. I don‘t hate my abductors. I only hate the system that created them. They were so nice to me. They are my sons. They called me ‘daddy, daddy, daddy.‘ They said they did not like what they were doing but that they were driven into it by the system.”

Security sources had told our correspondent that the suspected abductors demanded N100m ransom for his release but that some members of his family offered them N20m. The retired general was kidnapped on Friday from his farm in the Ovia North East Local Government Area in Edo State.

The general was reportedly abducted on Thursday at the premises of his factory located in Iguoriakhi, the same village housing Edo State College of Agriculture by men said to be wielding dangerous weapons.

According to the state Deputy Commissioner of Police, Mr. Hilary Opara, Ademokhai’s wife who reported the case at the state police command, said the kidnappers arrived the factory through Ose River in a speed boat, and demanded for money from the retired army general, but he had no money to give to them.

The wife, according to the police, had to part with the N4,000 that she had with her but this did not pacify the abductors from taking the general away in the speed boat they came with.

Opara disclosed that as soon as the command got the report, it made contact with Delta State Police Commissioner, the Area Commanders, and the Joint Military Task Force (JTF) in Warri, informing them of the development and requesting them to counter the kidnappers with their speed boats.

As at press time, the State Police Command was yet to get any information about the whereabouts of Ademokhai.

However, Edo the State Deputy Commissioner of Police revealed that one of Ademokhai’s sons informed him that the retired general had called him (son) on phone to say that he was in good health in the hands of his abductors. Kidnapping in Edo State in recent time has assumed a frightening dimension. The most recent was the kidnap of the wife of the Edo State Commissioner for works, Mrs. Itohan Obayagbona who was let off the hook of her abductors. Worried by this ugly situation of kidnapping in the state, the Edo State Government had to offer #1 million reward to anyone who provides useful information that can lead to the arrest of those perpetrating the act in the state.