Worry is Like a Rocking Chair by Joel Osteen

With the state of the economy and the unemployment rate, it's easy to worry.

Most of us remember the first time we heard officially on the news that our economy is in a recession. But did you know that the next morning, the birds still woke up and sang? They… Continue

The Believer's Authority We're in a Spiritual Battle

Chapter 1 - We're in a Spiritual Battle

Finally, my brethren, be strong in the Lord, and in the power of his might. Put on the whole armour of God, that ye may be able to stand against the wiles of the devil. For we wrestle not against flesh and blood, but against principalities, against powers, against the rulers of the darkness of this world, against spiritual wickedness in high places.

God’s Word reveals that we are not wrestling against… Continue

Sunday Sermon:Are You Feeding Your Soul also try out our evangelistic tool.

Are You Feeding Your Soul?

Are you happy with what you see when you look in the mirror? And I’m not talking about your physical body when I ask this question — I’m talking about your spiritual body. Has your soul been getting the nourishment it needs to grow in health and strength, or have you deprived it from the Word it so desperately needs?
If what you see in the mirror doesn’t even begin to reflect what you know you can be, it’s time to make a change, time to dive into God’s… Continue

Bigwigs grace wedding of Pastor Taiwo Odukoya to S’African RCCG Overseer Adeboye in attendance
Article Excerpts:
Pastor Itua Ighodalo who recently re-married amidst controversy and presumed depastoring was the one who supervised the cake-cutting session and also got the audience reeling with laughter and Pastor Odukoya squirming, as he made some obliquely risqué jokes allowed in a setting of that nature.

A lasting Investment by joel osteen

All of us are who we are today because others invested in us. I think about all the people in my family that have invested in me. My grandfather was very disciplined. He had a very strong work ethic. He taught me by example the importance of being diligent and giving every job my very best. My grandmother was so full of joy. I never saw her upset. She constantly had a song of praise coming up out of her heart. She is a big part of who I am today. She's one of the main reasons why I smile… Continue

It’s that time of year! During this Christmas season, I heard several sermons on the birth of Jesus. Now, in our Western culture that is rapidly losing its once-Christian worldview, Christians and Christian leaders need to use this time, more than ever, to challenge non-Christians. But will they give the vital message people need to hear at this time of history?

I stumbled upon this today while browsing the net and realised that a person's name just like his spirit,soul and body is a distinct criteria for his purpose in life .God has many names and the one we look at today is yahweh .
The Hebrews according to this article below are the progenitors of the naming convention and overtly and covertly have been identified with the history of the written word as we see it today.


Meaning, origin and etymology of the name… Continue

Living in Kaduna, we have some super hot days during the summer. It's not uncommon to hear about an air conditioner burning out because it's been overworked. But, the interesting thing is that many problems could be avoided by simply changing the air filter regularly. If the filter gets clogged or is too dirty, it restricts air flow which can cause serious malfunction.

In the same way, we have to keep the filters of our heart clean if we want God's love and power to flow… Continue

Jesus or Paul? It’s time to make a choice.

Jesus or Paul? It’s time to make a choice.
I wonder what those who choose to follow Paul would call themselves. Since apparently, they aren’t ‘Christians’ by definition. Maybe Paulines. LOL. The following article was lifted from 234next.com. I just couldn’t resist re-posting it here to see what my readers have to say about it. Let’s go!
Every Christian must decide whether s/he is a follower of Jesus or a follower of Paul. Don’t make the mistake of many in assuming the two are the… Continue

Seven tips for observing
a Daniel Fast or Daniel's Diet

The king’s food was likely not kosher, against Jewish dietary laws.
Daniel and his friends had vowed against wine.
The king’s food could have been offered up to idols or demons.
Write out and sign a commitment that outlines

Why you are fasting.
How long… Continue

Sunday Sermon “Depart From Me I Never Knew You”…who is Jesus talking to???

“Not everyone who says to me, ‘Lord, Lord,’ will enter the kingdom of heaven, but only he who does the will of my Father who is in heaven. Many will say to me on that day, ‘Lord, Lord, did we not prophesy in your name, and in your name drive out demons and perform many miracles?’ Then I will tell them plainly, ‘I never… Continue

Sunday Sermon: The Gift of Listening

A few years ago, I was deeply engaged in conversation with a woman while my little girl, Alani was standing beside me and really wanting my attention. This woman was pouring her heart out to me, and I didn’t want to cut her off mid-sentence, but Alani was tugging on my pant leg, desperate for my attention.

I started to get frustrated with my little girl, but instead of acting on that feeling, I decided to make a positive deposit into her heart. I interrupted the woman very… Continue

Have you ever been mad at God? Certainly, everyone has had anger rise up against a person. And there are a lot of people who are angry with themselves. Anger is a problem all of us have to deal with.

Many people come from backgrounds where strife was just normal. Our culture is so full of envy and strife that it's become part of life. We don't realize how deadly it is. But realize it or not, strife will kill you. Listen to what James had to say about envy and… Continue

Include Others in Your Plan

Not along ago, I was talking to a young man who had been addicted to cocaine for many years. He had tried to stop many times. He had good intentions. He was praying and believing, and His heart was in the right place. But every time he would try to quit, he’d fall right back into that addiction. This time, he told how he had been drug free for six months, which is the longest he’s ever stayed clean. I asked him how he did it, and without missing a beat, he told me his plan consisted of… Continue

Say a prayer before sex

Couples are being encouraged to pray together before sex in a new book published by prominent church group Catholic Truth Society. 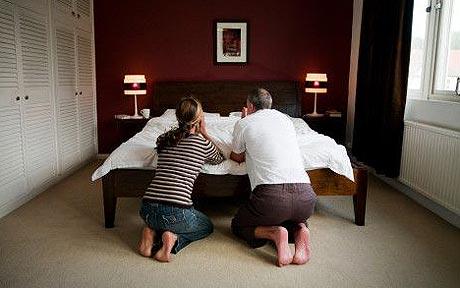 A special prayer to help couples "purify their intentions" is one of a number set out in the Prayer Book for Spouses.
The Prayer Before Making Love implores God "to place within us love that truly gives, tenderness that truly unites, self-offering that tells the truth and does not deceive, forgiveness that truly receives, loving… Continue