THE woman, Mrs. Anu Jegede, had a baby strapped to her back while a toddler of about three or four clutched her right hand.

They were returning from Anthony Village and had to cross the Oshodi pedestrian bridge to get to their Afariogun Street home.

But, mother and kid had stood at the foot of the bridge the last 25 minutes or more waiting.

Why Obama is going to Ghana By Reuben Abati

"OL'boy, are you watching CNN now?"
"No. I dey Tarmac dey chop life"
"What are you chopping?"
"Peppersoup. Correct isi ewu and nkwobi"
"Be careful. You may be taking a typhoid concoction."
"No. Oh. This one cures malaria. It is specially prepared. And the thing sweet no be small. Leave me make I chop the life of my head."
"Look, that's not why I called. I think you should go and watch CNN right now. It is a sad day for Nigeria. In fact every Nigerian must hide his… Continue

By Eugene Agha, 05.22.2009
Operatives of the National Drug Law Enforcement Agency (NDLEA) were yesterday morning attacked by suspected drug barons in Abbi town, Kwale Local Government Area of Delta State, during an official assignment.
The attack left two of the officers dead, while three others sustained varying degree of bullet wounds and were hospitalised. Four of the officers that were abducted have also been released.
The officers were said to have been ambushed by drug… Continue

I DONT GET IT ! DASH THEM 10Milion DOLLARS FOR WHAT ?
Sao tome with a population of about 150,000 roughly the population of Ikeja or Egbeda.

President Umaru Yar’Adua on Thursday defended the decision of his administration to grant a request for a $10m soft loan by the Democratic Republic of Sao Tome and Principe, saying that it was to assist the government of that country address pressing socio-economic challenges.

In a letter to the House of… Continue 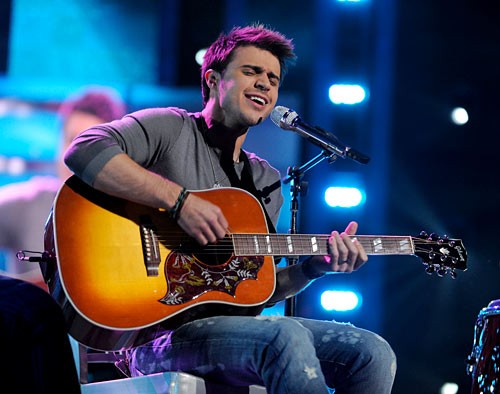 Really. Seriously? This is the biggest upset—well, ever, in the show's eight seasons. Even more than when Chris Daughtry was voted out or when Ruben Studdard beat Clay Aiken. It wasn't just that Adam was pimped out by the judges more than any Idol contestant this season—Paula practically… Continue

The police in Lagos have arrested a houseboy, Israel Adewale, for allegedly providing information and facilitating the entrance of criminals who robbed his master and battered his daughter.

Adewale, who was rescued from remand home by his boss, Emuze Phillip, with the belief that he could be rehabilitated, was arrested with two other suspects, John Patrick and Dapo Sodiq.

WARRI — TWENTY-FIVE persons — six children whose ages range between two and seven; 11 septuagenarians, six women and two other villagers were said to have been killed yesterday when Kurutie community came under fresh aerial attacks by the Joint Task Force (JTF) on the Niger-Delta.

Over 65 persons had earlier been killed and more than 100 injured since the JTF began its offensive against militants last weekend.

However, the Defence Headquarters, while explaining… Continue

PROMINENT Ijaw elders and youth leaders in Warri went into hiding on Monday as soldiers embarked on the arrest of some known Ijaw youths that had links with known militants in the state.

The fully armed soldiers were sighted at a five-star hotel in Effurun, in search of known militants in the town and suspected commanders of Government Ekpomukpolo, the leader of the recently destroyed Camp 5 in Oporoza in Warri South-West Local Government Area of the state.

Obamas to visit Ghana not Nigeria ! First Visit to Africa as president

is scheduled to travel to Moscow, Russia, July 6 to 8 at the invitation of President Medvedev.

The summit meeting will provide an opportunity for the United States and the Russian Federation to deepen engagement on reducing nuclear weapons, cooperating on non-proliferation, exploring ways to cooperate on missile defense, addressing mutual threats and security… Continue

Mr. Chris Ipigbhe, a sub-pastor at one of the Christ Embassy’s satellite parish, Baruwa, at Ipaja area of Lagos, had just attended an evening service that fateful Wednesday , where he personally mounted the pulpit to preach.

He never had the premonition that it was going to be his last sermon, as he was later shot dead by some dare-devil robbers shortly… Continue

Super Governor The changing Face of Lagos from the mind of Mr Fashola !

A first time visitor to Lagos cannot but be overwhelmed or lose sight of the new air of physical developmental initiatives pervading this megalopolis. Entering through northern tip of Ogun state, the weather begins to shine brighter as soon as you see the sign: "welcome to Lagos." From there, you begin to see signs of massive road expansion; from there you begin to notice the deliberate beautification exercise that has begun to give the city an alluring face-lift. From there you begin to see… Continue

Wait…I’ve seen this one before. Yeah, it was on my old blog before I let my blog die. Oh yeah, I let it die again btw, but whatcha gonna do?

As this is an old post, I may or may not agree with everything I said back in ‘08.

At first glance you would assume this post is going to be geared towards hardened Google spammers and the general “blackhat” community. Whilst it is true… Continue

AN American businessman, Mr. Brandon Benson, has narrated in graphic details how a Nigerian fraudster, Engr. Taiye Ogboyomi, allegedly obtained $1million from him under false pretence.

The American who is the president of Pipeline North Energy Inc, USA was brought into the country by the Economic and Financial Crimes Commission, EFCC to testify in a case of Advance Fee Fraud brought against the suspect before Justice G.K Olotu of the Federal High Court, Port Harcourt, Rivers… Continue

The search for our own Obama (IV) Pendulum By Dele Momodu

There is no better time to liberate our country than the year 2011. By then, Nigeria would have been 51 years old as an independent nation. We would have wasted a total of 50 long years trying to build a solid foundation for democracy, good governance and accountability. We would have endured incompetent, kleptomaniac, insensitive, wasteful rulers, for those number of years. 50 years in the life of a people cannot be a joke. As Chief Moshood Abiola once noted at the launch of Dream-maker by May… Continue

, by unidentified persons reportedly working in collaboration with some security men attached to his office.

9jabook sources gathered from a security source that the incident which happened on Wednesday, led to the immediate redeployment of some security chiefs attached to the governor and his wife, Clara.

Those relieved of their duties… Continue

Chelsea match Referee smuggled out of Britain ! "Gunned" down by Drogba faces ban

was Thursday smuggled out of Britain by police who feared for his safety because of his role in Chelsea‘s exit from the Champions League at the hands of Barcelona.
Ovrebo turned down four strong penalty appeals by Chelsea, who lost the semi-final on the away goals rule after Andres Iniesta scored in the 93rd minute of the second leg to level the scores at 1-1 on the night and on aggregate.
At the end of the game, Ovrebo was confronted by a… Continue