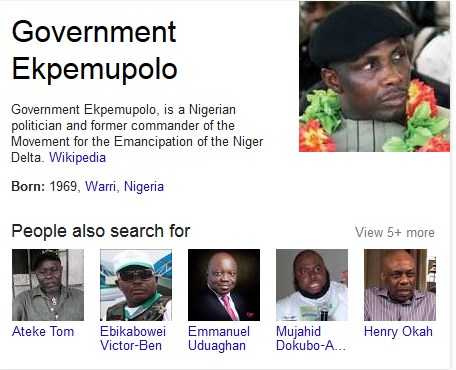 1.From the Oritsejafor Arms Deal Saga

2.To The Edo Arms Cache Discovery

3.Now a Fmr Blood on his Hands Spilling Oil Bunkerer has been in Charge of Nigeria's Maritime Security around the Niger Delta Commisioned by  the Federal Govt when We Still have a Nigerian Navy .

as noted by a punch commenter WE might just be WRONG about why Tompolo is buying 6 Warships NOW !

1. Tompolo has an open contract with the NNPC. NNPC also engages other private security outfits for its facilities both offshore and onshore

2) Tompolo's company patrols the coastal waterways with FG owned security operatives - army and navy. It's not a hidden affair

3) Buying warships don't mean anything. FG owned security outfits will operate the warships. It's like 'Bemil' buying a bullion van for bank excort with the police

Reports by a Norwegian newspaper, Dagbladet, said that the fast-speed Hauk-class guided missile boats had been re-armed with new weaponry.

The report also revealed that Ekpemupolo’s most recent purchase is a KNM Horten, a fast-attack craft now used in fighting piracy in Nigeria’s waterways.

It was learnt that in spite of his alleged history of violence, Tompolo, now controls the Global West Vessel Service, a privately owned contractor for maritime security for the Nigerian Maritime Safety Agency.

Buying arms from Norway requires an export license from Nigeria’s Ministry of Foreign Affairs. The ships were reportedly sold first to CAS Global, a British security company that has such a license, after which Ekpemupolo reportedly bought the ships from the British company.

Dagblade reported that the seven Norwegian ships are now part of the company’s maritime fleet patrolling under a contract for the Federal Government.

When Buhari Wins the Day Also Cometh for a Niger Delta too far.

Will the "incorruptible" Buhari Clamp Down on the MENDS as a Military man Where Goodluck Ebele Obviously Bribed down .
Will these
The Atekes, Boy loaf Tompolos Asari Dokubos be pacified ?

So that the Oil will continue to Circulate ?
and what about the Always Hungry Lion of Bourdillon.
His Investments must become Profitable

The General has a Ginormous Task Ahead .

I am no Prophet but that is where we "are" Headed

When the crisis in the Niger Delta reached a head around 2008, the name of Mr Government Ekpemupolo, alias Tompolo had become a reference item. By early 2009, the platform for the agitation of the Niger Delta militants called Movement for the Emancipation of the Niger Delta (MEND) had become as fiercely violent as danger can be. And when the group allegedly killed eleven soldiers, in the creeks of the Niger Delta, it was the crowning of the villainous profile of Tompolo. He was declared wanted by Brig Gen Yaki Bello. With smoking guns and crushing arsenal, the Nigerian army swooped on Camp 5, the Okerenkoko base of the Tompolo-led militants. Tompolo was nowhere to be found. But his camp was leveled and armoury ravaged and seized.  That was during the war. Peace has since followed, after the late President Umaru Yar’Adua granted the militants amnesty.

Today, the erstwhile villain called Tompolo, has transformed to a loyal ally of the same government that wanted him dead. He is now a valued patriot. In fact, they have long become business partners, with both parties providing complimentary services to boot.

Sometime in 2011, the Federal government awarded a pipeline surveillance contract worth $103.4m (about N15 billion)   to Tompolo’s company—Global West Vessel Specialist Limited (GWVSL). It was essentially to protect the nation’s water ways so the theft of crude which was going on at the time would be curbed. The underlying argument was that since the militants are from the creeks, they know the in-and-out of the crannies of the creek, therefore, they are in a better position to provide security to the pipelines, repel pirates and oil thieves who usually sail into the Nigerian waters at night to steal oil. The Federal Government, it seemed, was persuaded by the argument, especially with its determination  to court the militants so there would be peace. Sale of crude oil had dropped to all time 700,000 bpd because of the  unrest.  The Nigerian Maritime Administration and Safety Agency (NIMASA), a government agency, awarded the contract packaged like a concessionaire agreement with the private sector. It practically ceded the security and protection of the nation’s maritime to an individual, thus making the Nigerian Navy (NN) somewhat irrelevant in the business of securing our territorial waters. Beside Tompolo, other militant leaders like  Asari Dokubo, Dagogo, Egberi Papa, got N2billion contract to also secure the oil pipelines in Bayelsa and Rivers States. N580m contract was awarded Boyloaf’s (another militant)’s company.