THE National Assembly Joint Committee on Aviation investigating the Dana plane crash was told, yesterday, that seven years after the Bellview plane crash where 117 perished, investigations were yet to be concluded.

Disclosing this when he appeared before the committee at its second day public hearing, yesterday, Commissioner and Chief Executive Officer, CEO,  Accident Investigation Bureau, AIB, Captain Yusuf Lawal, told the committee members that investigations into the ADC crash which claimed the life of the Sultan of Sokoto, Muhammadu Maccido, his son and other victims had also not been concluded.

The Senate and the House of Representatives Committees on Aviation are presently carrying out a four-day investigation into the Dana air crash in Lagos and cargo plane that crashed in Ghana. 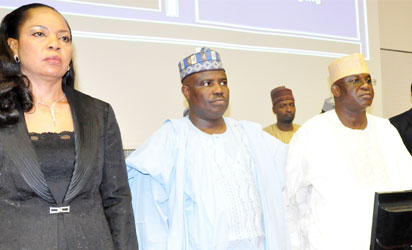 Lawal who also revealed that investigations into the Bellview crash were still on-going, stressed that the black box of the flight was never recovered from the crash site, just as he said the 2005 report on the Sosoliso air crash was released in 2006.

The AIB boss who disclosed that despite the inability of the bureau to analyse the black box, qualified staff of the bureau accompanied the box to the United States to avoid any interference, adding that if Nigeria as a country must set up a flight recorder laboratory popularly called the black box, a total of $5.6 million would be required.

We have only one helicopter —NEMA

Also at the hearing, the South-West zonal coordinator of National Emergency Management Agency, NEMA, Charles Adakole who disclosed that the agency had only one helicopter which is in Abuja, however, told the committee that rescue operations started four hours after the Dana accident took place.

Explaining some of the challenges faced by men of NEMA, Adakole said the agency received a call at two minutes past four and got to the site 18 minutes past four, adding that there was unruly crowd, unnecessarily large number of officials who were busy just taking pictures, no semblance of coordination, and stressed the need for Nigerians to be enlightened especially on the need for them not to go near crash sites because it could compromise search and rescue.

Also speaking at the public hearing, Managing Director of National Aviation Managment Agency, NAMA, Nnamdi Nwafor Udo, told the lawmakers that his agency which is responsible for “activating search and rescue” mission, responded promptly when the May Day alarm was raised.

Pressed further to provide specifics on the time lines of when the NAMA responded to the distress call, Udo said to avoid speculations, the transcript of recordings between the plane and NAMA would be most appropriate, even as he questioned report by some NEMA staff that they got the alarm around 3 o’clock and 4 p.m, insisting that the NAMA raised the distress call at 14:45 Nigerian time.

Also in his explanations, NAMA Director of Air Traffic Services, Mukaila Sholola, told the committee that the pilot did not indicate any sign of problems until five nautical miles when he called May Day.

Yesterday’s public hearing was not only an avenue for agencies in the aviation industry to narrate what happened, but relatives of victims also took time to lament.

Mr Ike Ibe, widower and father to the late Nancy and Jennifer Ibe blamed the Dana crash and previous ones on  negligence of government, a development he said had caused a total breakdown in governance.

Ibe who attributed corruption as the main cause of the crisis in the aviation sector and which had affected the Nigerian system and structure, said: “It is very clear over the years that the Nigerian system and structure have broken down. For every disaster and incident in Nigeria, the same templates have been adopted for investigation, recommendations, white paper etc. There is never implementation until the white paper turns brown or another disaster happens and the template is dusted up as the cycle continues.”

In his remarks, Chairman of the committee, Senator Hope Uzodimma, however, warned that airlines must appear even as he lamented that there was need to strengthen a lot of areas in the aviation industry.

The committee has summoned NCAA, Ministry of Aviation and all the airlines in the country, to appear before it today.

There is only one reason why the Belview crash report is not ready - there was a MASSIVE cover up that is why! Same thing also for the ADC that crashed on take off from ABV in October 2006.

Is there any coincidence that they were both classic Boeing 737 models?

Is there also any coincidence that the US FAA had issued an airworthines directive that mandated operators of the classic 737 to change the PCU in the rudder hydraulic circuit?

Who is responsible for ENSURING that is these aircraft type were going to be brougt into the country, all Airworthiness Directives has to be been completed?

In this day and age, information is freely and readily available; anyone who truly want to know will know. How can they tell us that the flight data recorder (FDR) from the Belview plane was not found at the crash site? Yet the very first pictures released clearly shows the tail of the crashed 737. Well folks, guess what? The FDR is located in the tail of 737! The FDR would have told us why the plane went down.

Because there has been no official investigation report, I will SPECULATE. This is my own theory  -

Someone took the FDR and ran with it! Why you may ask? Because it would have revealed that the airworthines directive issued by the FAA which required modifications to the rudder hydraulic circuit were not done.

And questions would then consequently be raised as to WHO signed off these aircraft as being suitable to fly in Nigerian Airspace.

Simple and short. Good enough reason to "not find the FDR", wouldn't you agree?

You see the culture of corruption does not only make people rich; it also kills innocent people.