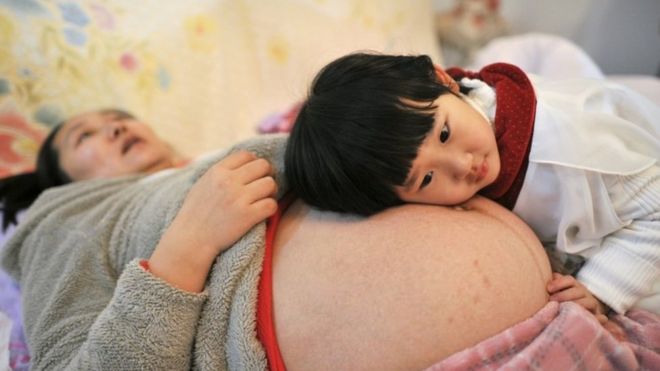 Couples will now be allowed to have two children, it said, citing a statement from the Communist Party.

The controversial policy was introduced nationally in 1979, to slow the population growth rate.

It is estimated to have prevented about 400 million births. However concerns at China's ageing population led to pressure for change.

Couples who violated the one-child policy faced a variety of punishments, from fines and the loss of employment to forced abortions.

Over time, the policy has been relaxed in some provinces, as demographers and sociologists raised concerns about rising social costs and falling worker numbers.

The Communist Party began formally relaxing national rules two years ago, allowing couples in which at least one of the pair is an only child to have a second child.

Introduced in 1979, the policy meant that many Chinese citizens - around a third, China claimed in 2007 - could not have a second child without incurring a fine
In rural areas, families were allowed to have two children if the first was a girl
Other exceptions included ethnic minorities and - since 2013 - couples where at least one was a single child
Campaigners say the policy led to forced abortions, female infanticide, and the under-reporting of female births
It was also implicated as a cause of China's gender imbalance

The decision to allow families to have two children was designed "to improve the balanced development of population'' and to deal with an aging population, according to the statement from the Community Party's Central Committee carried by the official Xinhua News Agency (in Chinese) on Thursday.

Currently about 30% of China's population is over the age of 50.

Correspondents say that despite the relaxation of the rules, many couples may opt to only have one child, as one-child families have become the social norm.

‘Protect Your Kids,’ 15 Tips On How To Stay Safe Amid Insecurity