CHARITY OHUKA: AN ABUSED CHILD IN DESPERATE SEARCH FOR LOVE! 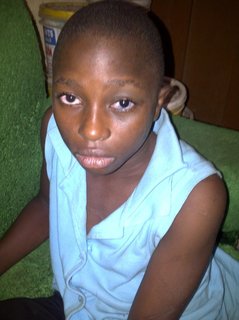 12 year old Ms. Charity Ohuka is apparently a victim of child abuse. She hails from Umuibe in Obingwa Local Government Area of Abia State. She ran away from her “home” two weeks ago and took refuge in a local police station in Lagos, where she nested until yesterday, June 9, 2011. Before her escape, she worked as a domestic help for one “aunty” that also lives in Lagos. She doesn’t even know her aunt’s (madam’s) name nor the address where she had lived for the past four months making it difficult for the police to take steps towards investigating her complaint. In the past two weeks she had sheltered in the police station, nobody has lodged any complaint of a missing child nor come forward to identify her as her ward.

The police station contacted my local parish, drawing the church’s attention to the girl’s plight. The Justice, Development and Peace Commission (of which I am a member) of my parish are popular in the environs for their longstanding involvement in, and handling of cases of human rights abuses, including matters that affect the wellbeing of children. The parish authorities quickly contacted me to intervene and do the needful, urgently too.

Do I believe this young girl’s story? Yes. And No! Yes because I have no doubt that she has been maltreated. I undressed her to find her entire body “decorated” with scars of varying degrees in freshness and depth. The marked difference in the colour of her two eyes seemed to corroborate her story that her madam allegedly injured her left eye. Although that flicker of stubbornness was glaring, no sane woman would inflict such grave injuries on her own child no matter the offence he/she may have committed.

It was clearly evident that she NEVER EVER wants to return to her madam’s house. She stated that her mother had handed her over to the said Yoruba-speaking madam in Port Harcourt four months ago. The madam had come down to Port Harcourt to pick her from her mum’s place. She could hardly remember where her mother lived in Port Harcourt.  I also gathered that Charity may have been born outside wedlock and was given out by a woman desperate to resume and relish an unencumbered bachelorette status.

What aspects of her story do I find bewildering? I saw in her a young energetic girl who chooses to remember only what she likes, and un-remembers only what she doesn’t like. She repeatedly mentioned that she cannot remember her aunt’s (madam’s) address or even the part of Lagos they lived. A twelve year old? I doubt. Very strongly too!   Mind you this girl is very articulate and uses her tenses very rightly and fittingly even though she claims her aunt (madam) never enrolled her in school. She remembers her village with utmost clarity, including all the junctions leading to her abode. She also remembers with amazing precision and fondness, every minutest detail about her dear old granny in Umuibe. And indeed, she wants to return there!

You know what I think? Methinks Charity wants to return to her grandmother instead of her own mother in Port Harcourt. Like every child of her age, I saw a young girl deeply craving for undiluted love, care, warmth and freedom irrespective of the circumstances of her birth. The laughter, smartness and affection she radiated during our meeting tossed me into a voyage of deep reflection, anxiety tinged with angst about the future of an African child. My angst registers in the very fact that the hopes of young people are constantly dashed by the very persons they look up to for succor.

Contrary to my advice and entreaties to the police, I was surprised  and deeply pained to learn this morning that Charity had been handed over to a certain juvenile home in Lagos. Juvenile WHAT??? Nevertheless, I have made up my mind to see that she returns to Umuibe village. I am convinced that the peace and love that she seeks is in Umuibe.

Every child, whether rich, poor, hungry, male or female deserves to be happy, and LOVED! QED!!!

Permalink Reply by rita on June 11, 2011 at 10:02pm
pls,we have heard you.why the long story,if you want to help pls do,cos no one else will.you have met with,helping folks this days is not easy.to me i see no reason for this long story.