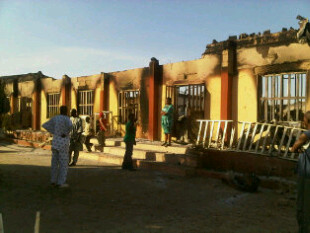 A series of bomb and gun attacks in the north-eastern Nigerian town of Damaturu has killed at least 63 people, the Red Cross says.

Witnesses said the bombs hit several targets, including churches and the headquarters of the Yobe state police.

Many people are reported to have fled the town after a night of violence. It follows attacks on security forces in the nearby city of Maiduguri blamed on the Islamist Boko Haram group.

Nigerian Red Cross official Ibrahim Bulama, in Damaturu, told the BBC at least 63 people had been killed there.

He said two other people had been killed in attacks elsewhere. News agencies said the nearby town of Potiskum had also been attacked.

An unnamed local government official in Damaturu was quoted by AFP news agency as saying that hundreds of wounded people were being treated in hospital.

Gunmen then engaged in running battles with security forces.

A Roman Catholic parish priest told our correspondent his church had been burnt down and eight other churches also attacked.

He described gangs of young men roaming the streets throwing improvised bombs into the churches.

The attacks followed a triple suicide bomb attack on a military headquarters in Maiduguri, in neighbouring Borno state.

That attack is believed to be the work of Boko Haram, which has launched frequent attacks on the police and government officials.

Who ever has sponsored this, muhhhhhhhhhh by fire they wil see.