A volunteer firefighter from Mississippi whose face was burned off during a home fire rescue received the world's most extensive face transplant, New York University Langone Medical Center said on Monday. 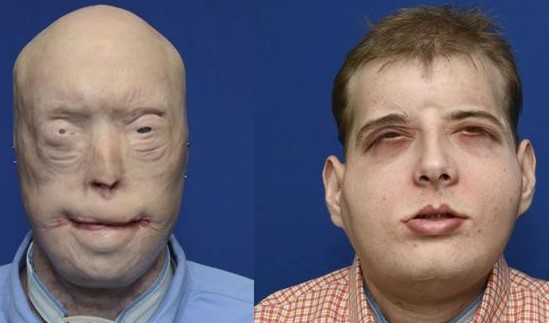 After a 26-hour surgery performed at the New York hospital in August, 41-year-old Patrick Hardison is living with the face of 26-year-old David Rodebaugh, a BMX extreme bicycling enthusiast from Brooklyn who was pronounced brain dead after a cycling accident.

He received a full scalp and face, including ears, nose, lips and upper and lower eyelids.

Now, for the first time since that raging fire in Senatobia, Mississippi in 2001, Hardison can blink and even sleep with his eyes closed - key steps to sparing his blue eyes from blindness that previously seemed all but inevitable, said Dr. Eduardo Rodriguez, the plastic surgeon who led the 150-person medical team that performed the procedure.

Simultaneous surgeries took place, Rodriguez said, with Hardison on one operating table while Rodebaugh was on the other. The NYU medical team had practiced for a full year to get it right.

"You only have one chance to land the Rover. The same goes with the face," Rodriguez told Reuters following a news conference in New York earlier on Monday.

The team slit the skin at the back of the donor's head, peeling each side forward with key pieces of bone attached at the chin, nose and cheekbone and then precisely draped it, like Batman's cowl, onto Hardison's head.

"Everything has to be perfectly positioned," Rodriguez told Reuters, including the bones, muscles, ear canals, lips and nerves.

NYU, which will pay for the estimated $1 million surgery, took the case after a firefighter buddy reached out on behalf of Hardison, whose own children were initially terrified of their father's disfigured face.

Proof of the surgery's success was obvious after a medical team took Hardison shopping for new clothes at Macy's this fall, and no one in the store gave him a second look, Rodriguez said.

Rodebaugh's mother, who gave permission for the transplant, noting her son was an unexpected gift after she had been told she could not conceive a child, recently was shown a photograph of the surgical results.

"Patrick is beautiful," she told the medical team.

Hardison in a statement thanked his donor's family, saying, "I hope they see in me the goodness of their decision."