The Federal Government is set to reap billions of naira from the importation of generating sets, as the Nigeria Electricity Regulatory Commission, NERC, has introduced a N25,000 charge per unit of 100KVA generator imported into the country.

The NERC, in its recently released, 'Guidelines for obtaining Clearance Certificate for the importation of generating sets and related matters,' also fixed a charge of N3,500 per unit of between 25kva and 100kva generators imported into the country, while generators between 5kva and 25kva attract a charge of N1,000 per unit.

The NERC is also charging 10 per cent of the fee paid on the initial certificate for renewal of import licenses.

The significance of this policy becomes enormous, especially when viewed against the backdrop that a couple of years ago, Nigerian businesses spent about N1.8 billion on importation of generators within one week.

This was contained in a data obtained from the Central Bank of Nigeria, CBN, which shows that 15 firms purchased $8.2 million from the CBN in one week to import generators alone.

Also, couple of weeks ago, another report published by a global research firm, GBI Research, projected that the importation of generating sets in Nigeria is expected to grow to about N151.16 billion ($950.7 million) by the year 2020.

The research firm expects the growth in the Nigerian generating sets market to be driven by the epileptic power situation in the country going by the current state of generation, transmission and distribution networks, and economic growth in the country.

The NERC, in the document obtained on its website, signed by the Chairman/Chief Executive Officer, NERC, Dr. Sam Amadi, said the provisions of the guidelines cover every importation into Nigeria. This includes fully assembled generators and knocked-down parts imported for domestic assembling of electric generating sets or retail as spares.

To qualify for the license to import generators into the country, the NERC said every applicant shall submit annual report of generating sets or knocked down parts imported by them in the last 12 months. The report is expected to show the various capacities and the number sold in each category.

The NERC further stated that the annual report of generating sets imported should be submitted before the end of the first quarter of the following year.

The NERC is also seeking to regulate the noise level of generators in the country, as those with noise level above the stated minimum will not be allowed into the country.

It said: "A certificate may be issued for the importation of generating sets or knocked down parts which comply with the relevant provisions on noise level of 35 decibels, as specified under the National Environmental (Noise Standards and Control) Regulations 2009, issued by the National Environmental Standards and Regulations Enforcement Agency (NESREA), and as amended from time to time.

"Every imported and locally assembled generator shall be fitted with optimizers to reduce environmental pollution arising from incomplete combustion."

"A certificate may be renewed for a further period of six months and no more subject to the payment of renewal fees.

A certificate issued by the Commission shall be for the purpose of importation of the generating sets and or knocked down parts listed therein and none other whatsoever.

"An application for renewal of clearance certificate shall be within 30 days after the expiration of the initial clearance Certificate issued.

DR SAM AMADI, ARE YOU SAYING YOU WANT NIGERIANS TO BE IN TOTAL DARKNESS, WHEN THERE IS NO IMPROVEMENT IN ELECTRICITY SUPPLY. SO WHEN YOU OFF YOUR LIGHT NIGERIANS SHOULD SLEEP WITHOUT LIGHT OR PRODUCTION IN THE FACTORY TO STOP UNTIL DAYS YOU RESTORE THE LIGHT.  THINK TWICE BEFORE YOU MAKE YOUR LAW.

BUT IT PAINS ME A LOT  WHEN THERE ARE SOME NIGERIAN CITIZENS OUT THERE WHO SACRIFICE THEIR LIVES TRAVELLING FROM COUNTRY TO COUNTRY TO IMPORT ELECTRIC GENERATING PLANTS FOR  TO MAKE THEIR LOVED COUNTRY AND CITIZENS TO LEAVE AND STAY WITH LIGHT, WITHOUT DARKNESS AT NIGHT BOTH FOR THEIR BUSINESSES BUT THE CURRENT GOVERNMENT WANT TO IMPLEMENT TAXES ON THEM . IF THE WHOLE WORLD AND THE NIGERIAN CITIZEN CAN ANALYSE WHAT THE CURRENT GOVERNMENT IS DOING AGAINST THE GENERATOR IMPORTERS YOU CAN SEE  AND UNDERSTAND  THAT  THIS IS JEALOUS , ENVIOUS , HATE AGAINST BUSINESSMEN /WOMEN  AND ETC ABOVE ALL THE ENTIRE CITIZEN OF THE WHOLE COUNTRY. NIGERIAN CAN SEE THAT THE CURRENT GOVERNMENT IS AGAINST THE POOR PEOPLE IN NIGERIA USING LIGHT  , IF THE CURRENT GOVERNMENT ADD MORE TAXES FOR GENERATOR IMPORTER HOW DO THEY THINK THAT THE POOR PEOPLE CAN BE ABLE TO BUY GENERATOR PLANT, EVEN THE SMALLEST THEY CALLED  ( I PASS MY NEIGHBOURS ) DEAR MR PRESIDENT THIS IDEA IS HOSTILE TO COUNTRY CITIZENS AND ETC.

am disappointed with your post.......this means that you dont have any positive plans for the power situation

This will simply be transferred to the customers and the problems continues. Do they really know basic Economics? What a shame

I was thinking that this Dr. Sam Amadi will automatically stop the importation of Generators.

But by this it only seems.......he is looking for other ways of generating revenue for the ill thinking government.....that cannot sit up to the fact that there is supposed to be steady power supply by now in NIGERIA. 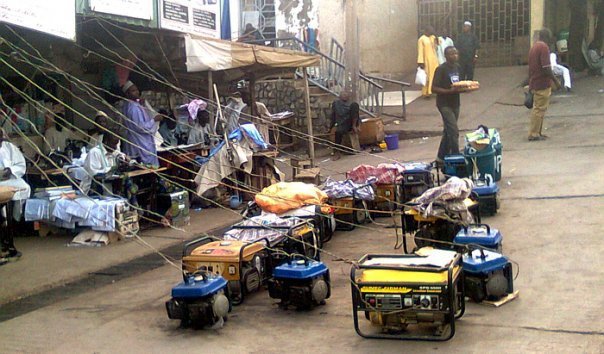 I AM ASHAMED & LETS EXPECT THIS IN THE NEAREST FUTURE

BECAUSE IMPOSING LEVIES/TAXES/DUTIES ON THE IMPORTATION OF GENERATORS WILL NOT GIVE NIGERIANS STEADY POWER SUPPLY......PERIOD