I did not beat my wife former naija Amabassador to Kenya, his side of the story. 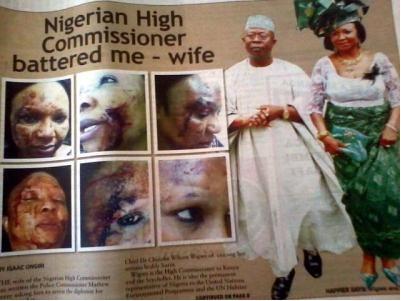 The rumour mills were going into overdrive over the past week when a local newspaper published pictures and a story of the Nigerian High Commissioner's wife's tale of domestic violence and battery from her husband, Dr. Chijoke Wigwe.

In addition, the story has gone viral in blogs, newspapers and international media. The main theme they’re carrying is the story of the battered wife. In all the articles we have seen, none has investigated the story further.

From the article, the wife, Tess Iyi Wigwe accused Dr. Wigwe of battering her repeatedly over 'a dinner argument'. The diplomat is said to have hit her repeatedly, with cuts showing on her bloodied face.

What the journalists have seemingly failed to do is to investigate the other side of the story, which would have been the prudent thing to do, given the nature of diplomatic influence and damage this was going to have.

Sources revealed to us that Mrs. Wigwe has been long separated from her husband, and no longer resides with him permanently. she spends most of her time away from her husband's diplomatic's residence, preferring to live elsewhere. Their two children live with the husband.

However, the story that is emerging is one of battery and violence, with her as the alleged perpetrator.
Our sources further revealed that she has gone so far as to batter domestic staff, drivers and diplomatic residence staff, which has been done repeatedly.In 1998, Mrs. Wigwe was expelled from Japan in a scandal that brought to light the fact that she had assaulted a diplomat from another country. This of course could not be condoned and she was sent packing.

Lately, she has been fighting her husband for property acquired AFTER their separation. She has been picking up cars from the diplomatic residence and sometimes hindering her husband’s movement, forcing him to use taxis in his daily routine and while on social engagements.

What is coming to light is that on finding that her husband purchased property in Nairobi, she contacted a friend of hers, who is a senior staffer at an international organization, and the two allegedly conspired to 'teach him a lesson'.

Our sources informed us that Mrs. Wigwe showed up at the diplomatic residence in the evening, demanding to know why Dr. Wigwe was making purchases such as the residential property without consulting her. She then proceeded to beat and attempted to choke her husband. This is where it emerged that she is the one who has been the harbringer of domestic violence in the marriage. Dr. Wigwe, in his defence is said to have pushed her, and she fell and hit herself on the stairs and banister, injuring her face.

>Mrs. Wigwe, on seeing what happened, is alleged to have smeared the blood all over her face, and then proceeded to take pictures of herself for evidence. She then demanded USD 200,000  and the title deed to the house so as not to release the pictures. Her children are said to have aided to get her out of the house, where she went on to damage the property, breaking windows, ornaments and damaging doors before she left in the company of the same friend who had hatched this plan with her. All this is said to be in evidence at the NHC residence.

The questions that come to mind are as follows:

* Why did Tess Wigwe wait 10 days before reporting the incident to the police?
* Why did she first run to the press, where she is known to have intimate friends, who published her story?
* Why did she pause to take pictures of herself, instead of going to secure medical attention, and have the doctors document her injuries?
* Has Dr. Wigwe said anything to this matter? Reports say that he has always agreed to being in a bad marriage, he has not hidden that fact
* Have the police bothered to check out the validity of the story
* Does Mrs. Wigwe have medical records detailing and documenting her injuries, from a neutral source?


While FIDA has come out guns blazing to demand that Dr. Wigwe be arrested and expelled from the country, have they heard the story from the other person in this whole mix? Have they interviewed the children, who more often than not are silent witnesses to what goes on in a marriage?

The media sometimes is biased, taking on the woman's side, even when presented with evidence to the contrary. It is remembered that in the story of Joyce Akinyi and Anthony Chinedy, Akinyi visibly assaulted her husband in the full glare of cameras. No action was ever taken against her in clearly what was a case of domestic violence.
Mrs. Wigwe is known for her hot temper, even in social circles. In 2003, she assaulted a local journalist and another lady for talking to her husband while at an event at the Holiday Inn, Nairobi.

Where do we draw the line?

Do we condemn a man just for the fact that the woman broke the story first? Or do we investigate and hear all sides of the story?

Permalink Reply by ADAEZE MAUDLYN EKWUEME on June 1, 2011 at 9:20am
I don't buy his story! Answers 2 that question is so simple to answe

Permalink Reply by Kenny A on June 1, 2011 at 9:53am
Whoever wrote the piece above, your story is difficult to sell. I'm a married man, living with wife and kids. That the woman chose to go to press instead of hospital/police in no business of anyone and that the woman sustained ALL these injuries from just a "fall" is ridiculous. The woman may have her side-effects but she was "BATTERED". Whatever a woman's attitude, its wrong for her to be battered as we have seen. While i'm no judge of anyone, i think the laws should take its cause on the ungentleman - ambassador.

Permalink Reply by Moses K Tawose on June 1, 2011 at 10:08am
Whatever is coming up as the other side of the story wouldn't matter as the damage has been done.It's like a hiding knife that injured and now to be taken away has it not done what it always do in the first place.Bad news sell and that''s what the media does after all who has the gun and shoot first wins outright.My stand still remains until one is in the shoe to knows it how the tightness of the shoe felt. Even though we might felt the tightness it would never be experience the same way.

Permalink Reply by Tunde Hassan on June 1, 2011 at 11:14am
I don't understand that woman! How can your hubby beat you up without you doing nothing for him.Look at the story now.In the first place if anything like that happen you call the police,not that you take picture. Police suppose to take picture not you.when you are coming to your husband place why must you u come with camera.

Permalink Reply by Foluso Odusanwo on June 1, 2011 at 3:01pm
I judged too fast without hearing the other side. I erred in my earlier judgement of the man. Only God knows what this ex ambassador had been coping with in his own house. It takes a lot of courage from a man to spill his beans out publicly like this. The Bible says in Proverbs 21:9 that it is better for a man to live in a corner of a roof than in a house shared with a contentious woman. Looking at the pictures, it looked like she took those pictures by herself. Also, it looked like she rubbed the blood over her face to enhance the effect of the injury. According to the story, they have 5 children together. The woman does not care about anything except what she will get out of this. What about the shame this will bring on the children? What about the career of the man? This woman is truly very wicked. One should really beware of women like this.

Permalink Reply by Adoli justice godfrey on June 1, 2011 at 3:47pm
justice should be done,nd investigate properly.

Permalink Reply by Olawole Adeniyi on June 2, 2011 at 2:06am
I said it before we people always jump in to conclusion, someone you don't know you don't judge, we hear the story of the woman and people are asking for the head of the guy,but one thing i want every one to know is that except you live with either of them you never know the good from the bad. Is only God that could tell exactly what went wrong, In relationship it is only the two people involve that could tell what they're going through. so people should always check before jumping into conclusion. thanks...

Permalink Reply by Gabriel Edem Archibong on June 3, 2011 at 6:29am
After reading 2 sides of the story along with the son's side too, I have come to the conclusion that the Ambasador should file a libel suit against both his wife and all the papers that published the one sided account. He should sue them for damages totalling N30m each for character defamation and assasination. For all those who abused the Ambassador, I wish all of una marry this kind women who wil dump your children on una, fight and disrespect you, setting u up at and trying to ruin your career at the slightest whimp. She will be fucking around with different men while expecting una to continue paying her mortgage. Women wrapper - is it normal for a woman to beat a man, his staff, dump her children and seek her husband's downfall and still expects her monthly morgages to be paid? God help the mumus, magas and mungo parks cos some of us are real men for God sake!