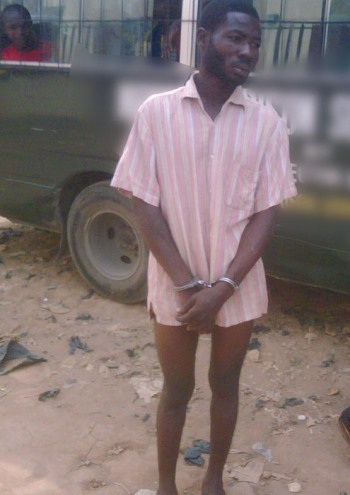 According to PM News, a 'peeping Tom', 36yr old Raymond Obi Eze (pictured above) was sent to prison for watching a couple have sex. Raymond hid in the couples bedroom, under their bed, and watched them have sex to 'derive sexual satisfaction'.
He was discovered by the man of the house, who handed him over to the police. Raymond was charged to court on a two-count charge of unlawful entry and attempted murder. He pleaded not guilty to the charges, saying he was only watching the couple have sex and did not attempt to harm them.
He was granted bail in the sum of N100, 000 with two sureties in like sum. When he could not meet the bail conditions, he was ordered to be remanded in prison custody at the Kirikiri Maximum Security Prisons, Apapa, Lagos.

first and foremost this is barbaric,but lets be careful, has the guy be seriously questioned about his activities with the woman,definatelly i smell a rat,if he can confirm his usual presence there everytime,how come he was so sure  of when the couple meets and how does he normally get out of the room

Was going to say the same thing,how does he get in and out of the house without any1 tking note.The should b more questions asked!Some1 is not talking.

My first question is who is Raymond Obi Eze to the Couple? Secondly, Was he a house helper to them? Thirdly, Does he live in the same Premises with them? If non of the above, the wife should be thoroughly interrogated because, how did raymond manage to get into the house of the Couple? I rest my Case.