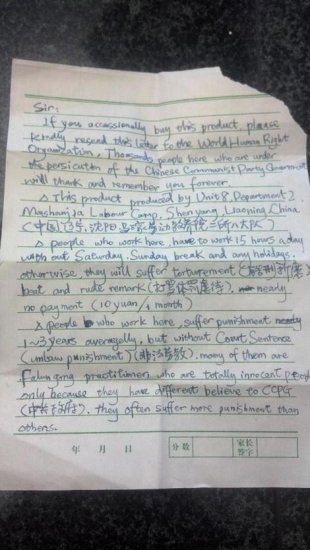 Julie Keith was unpacking some of last year's Halloween decorations when she stumbled upon an upsetting letter wedged into the packaging.

Tucked in between two novelty headstones that she had purchased at Kmart, she found what appeared to be a letter from the Chinese laborer, who had made the decoration,pleading for help.

The letter reads: "Sir, if you occasionally buy this product, please kindly resend this letter to the World Human Right Organization. Thousands people here who are under the persecution of the Chinese Communist Party Government will thank and remember you forever."

"I was so frustrated that this letter had been sitting in storage for over a year, that this person had written this plea for help and nothing had come of it." Julie Keith told Yahoo! Shine. "Then I was shocked. This person had probably risked their life to get this letter in this package."

The letter describes the conditions at the factory: "People who work here have to work 15 hours a day without Saturday, Sunday break and any holidays. Otherwise, they will suffer torturement, beat and rude remark. Nearly no payment (10 yuan/1 month)." That translates to about $1.61 a month. 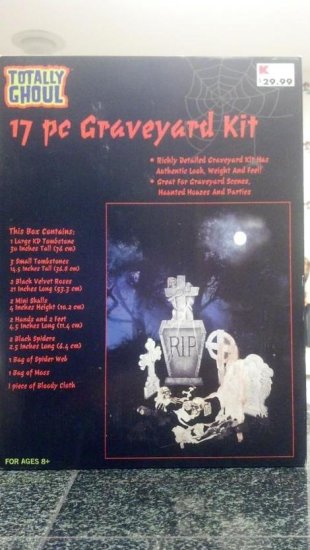 The letter was found inside this packagingKeith, a mom who works at the Goodwill in Portland, Oregon, did some research into the letter. "I looked up this labor camp on the internet. Some horrific images popped up, and there were also testimonials about people who had lived through this camp. It was just awful."

Horrified, Keith took to Facebook. She posted an image of the letter to ask friends for advice. One responded with a contact at Amnesty International. Keith made several attempts to alert them about the letter, but the organization never responded.

With no response from various human rights organizations, Keith took her story to The Oregonian. "The reporter, Rachel Stark, got through to Human Rights Watch, but I had no luck."

This is not the first time a letter like this has turned up. Just this week, another plea was found written in Chinese on a toilet seat and posted on Reddit. Commenters on the website have questioned the letters' authenticity.

Though the letter lists the address of the specific camp, officials at Human Rights Watch were unable to verify the authenticity of the letter. However, Sophie Richardson, China director at Human Rights Watch, told The Oregonian that the description was consistent with their research. "I think it is fair to say the conditions described in the letter certainly conform to what we know about conditions in re-education through labor camps."

The concern over the conditions laborers must endure in China and other countries first came to the public eye in the 1980s with the use of sweatshops to make Nike sneakers. Since then, according to an article recently published in The New York Times, Nike "has convened public meetings of labor, human rights, environmental and business leaders to discuss how to improve overseas factories."

Tech companies, like Apple and Hewlett Packard, are being made to be accountable for their labor practices. After receiving a great deal of criticism, Apple is now making public statements that they are aware of the harsh conditions in China and are taking steps to improve them.

As for Julie Keith, she had a general idea about the conditions in Chinese labor camps, but this letter has been a dramatic eye-opener into the stark reality of the issue. "I was aware of labor camps. I knew they had factories but I had no idea of the gravity of the situation. I didn't realize how bad it could be for people."

Finding the letter has made Keith more aware of the origin of many products sold in the United States. "As I was doing my Christmas shopping this year, I checked every label. It's virtually impossible to avoid purchasing things made in China as over 90 percent of our goods are made there. But if I saw 'made in China,' this year I asked myself, 'do I really need this?'"

Brazil is Out ! Croatia Enters Semi Finals in 4…2 Scorcher !