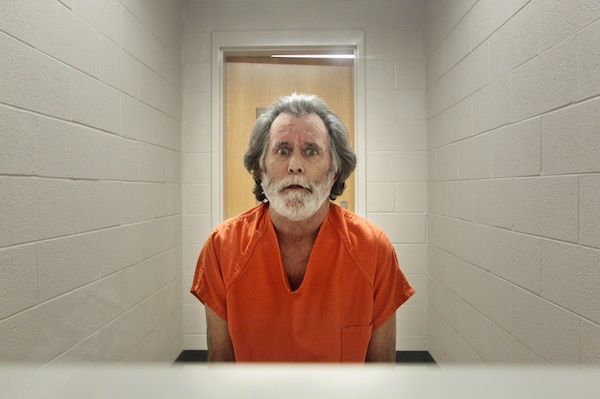 Some people who need medical care but can't afford it go to the emergency room. Others just hope they'll get better. James Richard Verone robbed a bank.

Earlier this month, Verone (pictured), a 59-year-old convenience store clerk, walked into a Gaston, N.C., bank and handed the cashier a note demanding $1 and medical attention. Then he waited calmly for police to show up.

He's now in jail and has an appointment with a doctor this week.

Verone's problems started when he lost the job he'd held for 17 years as a Coca Cola deliveryman, amid the economic downturn. He found new work driving a truck, but it didn't last. Eventually, he took a part-time position at the convenience store.

But Verone's body wasn't up to it. The bending and lifting made his back ache. He had problems with his left foot, making him limp. He also suffered from carpal tunnel syndrome and arthritis.

Then he noticed a protrusion on his chest. "The pain was beyond the tolerance that I could accept," Verone told the Gaston Gazette. "I kind of hit a brick wall with everything."

Verone knew he needed help--and he didn't want to be a burden on his sister and brothers. He applied for food stamps, but they weren't enough either.

So he hatched a plan. On June 9, he woke up, showered, ironed his shirt. He mailed a letter to the Gazette, listing the return address as the Gaston County Jail.

"When you receive this a bank robbery will have been committed by me," Verone wrote in the letter. "This robbery is being committed by me for one dollar. I am of sound mind but not so much sound body."

Then Verone hailed a cab to take him to the RBC Bank. Inside, he handed the teller his $1 robbery demand.

"I didn't have any fears," said Verone. "I told the teller that I would sit over here and wait for police."

The teller was so frightened that she had to be taken to the hospital to be checked out. Verone, meanwhile, was taken to jail, just as he'd planned it.

Because he only asked for $1, Verone was charged with larceny, not bank robbery. But he said that if his punishment isn't severe enough, he plans to tell the judge that he'll do it again. His $100,000 bond has been reduced to $2,000, but he says he doesn't plan to pay it.

In jail, Verone said he skips dinner to avoid too much contact with the other inmates. He's already seen some nurses and is scheduled to see a doctor on Friday. He said he's hoping to receive back and foot surgery, and get the protrusion on his chest treated. Then he plans to spend a few years in jail, before getting out in time to collect Social Security and move to the beach.

Verone also presented the view that if the United States had a health-care system which offered people more government support, he wouldn't have had to make the choice he did.

The Affordable Care Act, President Obama's health-care overhaul passed by Congress last year, was designed to make it easier for Americans in situations like Verone's to get health insurance. But most of its provisions don't go into effect until 2014.

As it is, Verone said he thinks he chose the best of a bunch of bad options. "I picked jail."

Permalink Reply by Moses K Tawose on June 22, 2011 at 3:25pm
It's clear why he did what did and that's an SOS. One he's sick and with his meagre salary he might not be able to afford it at the end of the day. Rob a bank for just a dollar~~~~~? What is wrong should be the right question to ask and he said that if the sentence wasn't severe enough he's bound to do it again. Think about it. If he can afford to pay a taxicab which it's fare would be more than a dollar he demands. He might have no place to call home afterall he has a job that pays him wages. What about his medical which might be unaffordable. He might not as well have a family or friends and all this he would get among the inmates and the best medical while incarcerated. He knows what he's doing and what he wants which was the reason for doing it again if wasn't giving a longer time in the penitentiary.