After a petition by The Eldest Son of Late Sir  Engineer Kola Sheidun Mr Ekundayo Sheidun .Late Sheidun was The Odovidi of Igarra in Akoko Edo local Govt of Edo State,(One of the Pioneer Engineers involved in the Reconstruction of Nigerian Industries after the Nigerian Civil War ) SEE Full Bio here  http://igarra.com.ng

The Edo Police Commissioner has granted The Assignment of Another Judge in the Forgery Will Case against His 2nd  Wife surprisingly a  Lawyer  Mrs Mercy Sheidun  & Another Lawyer and a Former Employee of The Late Shiedun ..see details below .

The Drama Continues as 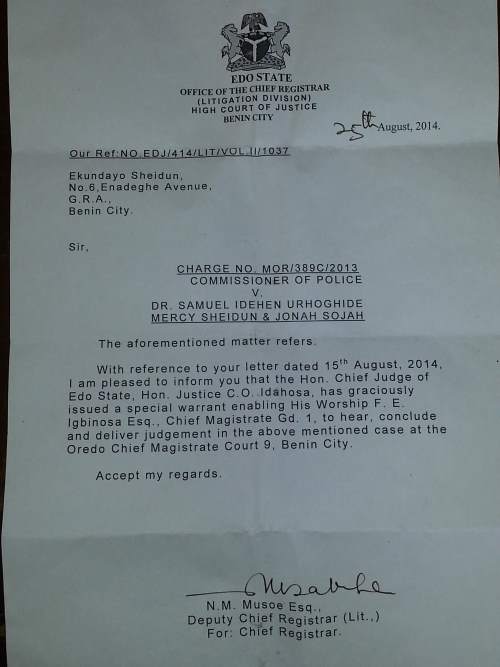 Shocking ! Housewife & Lawyer Mrs Mercy Sheidun Charged for Forgery of Late Husbands Will in collaboration with her Lawyer and One Accomplice in Edo State

The Police in Benin City, capital of Nigeria’s Edo state, have arraigned 46-year-old lawyer-wife of a millionaire, her lawyer and another over alleged forgery of Will.

The accused, Mrs. Mercy Sheidun, Barr. Samuel Urhoghide and one Jonah Sojah, were arraigned before an Oredo Magistrate’s Court on a two-count charge of conspiracy and forgery.

The three accused pleaded not guilty of the alleged offence.

Sheidun was the pioneer Managing Director of Okpella Cement Factory in the defunct Bendel State.

It was gathered that Mrs. Sheidun’s step-children from the his First wife  suspected foul play in the contents of the will, which bequeathed Most assets to her.

The children were said to have subjected the alleged Will to forensic test twice at the police forensic science Laboratory, D Department, Force CID Ikoyi, Lagos, where it was found to have been forged.

An excerpt from the forensic report reads: “It is my opinion that the questioned signature in the relevant column of the document (testaments) marked Exhibit A5 is not the same with the standard signatures on documents Exhibit B-D (signed documents by Sir Sheidun).

According to the charge sheet MOR/389/2013, , the accused persons on August 22 1997 at 3 Isibor street off Murttala Mohammed Way in Benin city allegedly conspired among themselves to commit felony.

The Prosecutor, Inspector Osaretin Ogiehor, told the Court that the accused persons “did forge a testament instrument to wit; a will purported to have been made by late Sir Kola Sheidun, and thereby committed an offence contrary to section 465″ of the criminal code.

The trial Magistrate, Mr. Peter Asemota, granted Mrs. Sheidun and Urhoghide bail on self recognition as lawyers, while the third accused, Sojah, was granted bail in the sum of N100,000 with a surety in the like sum and who must be a house owner within the Oredo magisterial district.

He adjourned the case to 23 September for hearing.

Insider Reports Obtained by 9jabook have revealed The Late Sir Kola Sheidun died in "mysterious circumstances"  and reports say during his brief illness his Family was not contacted until it was too late . Of the numerous Properties He left behind the Accused connived with her Lawyer and One of her Late husband's Staff to perpetrate this crime .She is alleged to have diverted most of the Expensive properties within the will  to her own children who sources claim are under various paternity & DNA Allegations by the Children of the  Late Sheidun from his First wife .