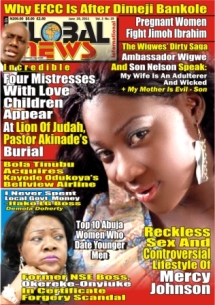 Funny Enough Global news is nothing less than a Glorified Junk magazine but it is being paraded by So called Top Online News Media Like Sahara Reporters and co .. I really do not see the point this article is trying to make…apart from possibly dragging the name of the actress in the mud. Yes, I read several report the Mercy is reckless…but this report lacks dept and substance. The accusation is not even substantiated. global news needs to be careful else…someone daring would sue you to your bones!

When news that this beautiful actress had finally decided to settle down and marry, many of the wives of men who had something to do with the actress heaved a sigh of relief. And they had a good reason to. Mercy Johnson Ozioma is one Nigerian actress who has courted scandal as a way of life. The Kogi State-born actress virtually has scandal as her middle name as she enjoys being in the news for the wrong reasons at all times.

The dark-skinned Mercy has indeed been merciless to many ladies and wives, and it would not be surprising if they ask for a special thanksgiving service in their respective churches if she eventually ties the nuptial knot in August, as widely circulated, as she has been mentioned in lurid stories of being hot pants, employing charms and habitual quarrelling she involves in.

Mercy Johnson who is blessed with nice shape confessed at a time that it was because of her boobs and hips that it was prophesied that she was going to become a good actress by a friend who walked up to her some years back. According to her, after watching actresses like Genevieve and others she “later approached a friend for assistance to feature in a movie. He stared at my boobs and hips and told me that I would make a good actress.” Little wonder she’s been accused of using the very parts in the prophetic assessment to climb the ladder in the make-believe industry.

It would be recalled that a few years back, she was alleged to have aborted a pregnancy for a man called Obi by those who are in the know. Not done with her wild lifestyle, she was at another time in a sizzling romance with Ibrahim Dumuje, another man who people accused of having skeletons in his cupboard. Mercy at that time told whoever cared to listen that she had met her Mr. Right in Ibrahim before that relationship crumbled simply because she was accused at that time of stealing some money that belonged to her then fiancé, which led to fierce quarrel… and the rest is history.

Permalink Reply by frank Paschal on June 8, 2011 at 3:20pm
mercy johnson, is too much, if i have the chance to take her out for dinner, it will be my greatest pleasure...

@john, if u call her a whore, that means every woman is. when will nigerian stop tagging actresses in nigeria as whores especially the men. but u watch the ones in hollywood and they are not called names

Permalink Reply by Ad´joshoke on June 8, 2011 at 6:32pm
I do wholeheartedly appeal to everyone that knows about the past of Mercy Johnson to let Her be at least for now. She is as white as the snow now and therefore we should not allow her negetive past to hunt after her. Am happy for her for being a repented Lady at last.

Permalink Reply by Amaka on June 8, 2011 at 10:27pm
Saint John Aggrey, who are you to judge & call her a whore. In which way do u think u are better. The man without sin cast the first stone. Destroyers of character.

Permalink Reply by Dan WebNutritionist/Motivator on June 9, 2011 at 8:42am

Why is it now this is coming out.People nor get work o!

petty gossip, d promoters of dis kind of gossip should get busy pls.

Permalink Reply by Moses K Tawose on June 11, 2011 at 7:14pm
Let who has no sin cast the first stone afterall it business and money tied together. That's what made her to be known in the first place why the tantrum?

Permalink Reply by steph ebi on August 24, 2011 at 7:55pm
why  nigerian cant leave this poor litlle girl alone is mercy the most beutiful woman in nigeria  were have mercy got award of any miss of any kind is she GOD WHY ALL ABOUT MERCY  MERCY IS IT BAD TO BE BEUTIFUL WILL SHE ACT FOREVER  WHY CANT NIGERINA ALLOW THIS GOD GIFTED LADY A BREATH TO ENJOY HER LIFE  ALL I HAVE TO TELL U MERCH IS BE STRONG AND LOOK UNTO GOD YOU WILL NEVER FAIL SKY IS YOUR LIMIT I WISH YOU ALL THE BEST MISS WORLD    HIFI PADOVA ITALY