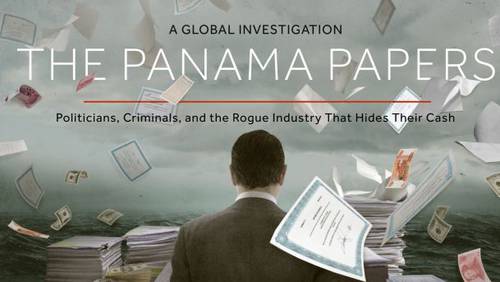 It was hardly surprising that the names of some Nigerian politicians, including Senate President, Bukola Saraki, Gen. T.Y Danjuma and former Delta State Governor, James Ibori, appeared in the leak of confidential documents from one of the world’s most secretive companies, Panamanian law firm Mossack Fonseca. The leaked files show how Saraki and his wife, Toyin Saraki secretly owned assets and bank accounts offshore running in millions of dollars, which Saraki reportedly left out while declaring his assets to the Code of Conduct Bureau (CCB). Although Saraki has denied any wrongdoing saying he fully complied with the law on asset declaration, it is indeed tempting to say the timing is ominous, as it seems to vindicate the case against Saraki, who is standing trial at the Code of Conduct Tribunal (CCT) for false declaration of assets. Unfortunately, the Presidency seems too preoccupied with distractions to leverage the renewed global focus on the issue of illicit financial flows to bolster the fight against corruption and money laundering that has all but brought Nigeria to its knees. It is indeed sad.

The bombshell revelations of secret offshore accounts tied to more than 140 politicians and public officials from over 50 countries are sending shock waves through halls of power across the world, from the USA to faraway Australia. Within 48 hours, the largest leak of confidential documents in history had shaken the foundations of power around the world, triggering the resignation of Iceland’s prime minister and sending political shock waves from Pakistan to Argentina to Ukraine. Even as prosecutors and officials across the world have announced investigations into the Panama Papers revelations, the expectation was that Nigerian anti-graft agencies would be seeking collaboration with their foreign partners to hold the embattled Senate President accountable, as his trial opened last Tuesday. It defies logic as to why Nigerian authorities will continue to labor under the silly illusion that they can fight graft.

Saraki is alleged to have failed to declare at least four offshore assets listed under his wife's name that appear in the leaked documents, obtained by a German newspaper and shared with the International Consortium of Investigative Journalists. But like other powerful politicians, Saraki knows how to outmaneuver the law. The other Nigerian politician named in the leaks is former Delta governor, James Ibori, who pleaded guilty in a London court in 2012 to money laundering offenses. Ibori admitted using his position as governor to launder up to $75 million through a network of offshore companies, although some estimates the total amount he embezzled at over $250 million. Ibori, who was sentenced to 13-years in prison, stole millions of dollars to support a lavish lifestyle that included six houses in London and a fleet of Range Rovers, Bentleys and Mercedes cars. Mossack Fonseca was the registered agent of four offshore companies connected to Ibori and his family members.

Without leaks like this, nothing would be publicly known about the tax haven companies now exposed, and next to nothing would be known by the authorities in the countries affected. It is worth-recalling that Ibori was tried and acquitted by Nigerian courts for the same crimes that he pleaded guilty in London. Therefore, if Saraki considered Nigeria's third most senior politician behind President Buhari and Vice-President Yemi Osinbajo escapes Nigerian laws because of loopholes and leniency in the system, Nigerians expect the international community to hold him accountable. The government’s failure to issue an official statement on the Panama Papers is unconscionable for a country that has probably experienced the greatest illegal outflow as a percentage of GDP.

According to the UN High Panel on Illicit Financial Flows from Africa, the continent lost about $850 billion dollars between 1970 and 2008. An estimated $217.7 billion dollars was illegally transferred out of Nigeria over that period, while Egypt lost $105.2 billion dollars and South Africa more than $81.8 billion. According to Raymond Baker, Director of the Washington DC-based Global Financial Integrity, Losing such a staggering amount to illegal acts, in a country blighted by underdevelopment, characterized by huge infrastructural deficit, dehumanizing conditions of living, rising poverty and youth unemployment, among other socio-economic malaise, is criminal.

While the millions of documents have only begun to be examined, the names of Saraki and Ibori are not meant to suggest that these are, by any means, the only people who have plundered Nigeria. There will be many more revelations as well as the opportunity to analyze them more broadly. Ilicit financial flows do not only stifle economic growth and development, it is also a potential source of political instability and insecurity. The Panama Papers, together with the President’s resolve to fight corruption are useful and capable of creating public awareness about the problem, they are certainly insufficient. If Nigeria is serious about tackling the problem of corruption and money laundering, the authorities must first identify the actors and sources of such illicit funds and block the flow.

To be sure, the main actors are usually known to high ranking government officials and in many cases are actually their cronies. Traceable to blatant crimes, drug trafficking, piracy, oil bunkering and such other illegalities, these funds flow, unfortunately, having been aided by government officials, even as law officers look the other way while government departments and revenue agencies are used as conduit pipes. Merely lamenting the situation and calling for help from the international community as Buhari has been doing is not enough. The President should take decisive steps, show utmost sincerity by demonstrating strong political will to fight corruption in its entirety.

Such a war against illicit financial flows can only be won if leaders lend themselves to an exemplary lifestyle devoid of corruption. President Buhari cannot be credited with sufficient political will to fight corruption in Nigeria, when his hands are tight. His election was financed by people with questionable credentials; some of whom have stolen the country blind. Some indicted for corruption are even in his cabinet. Therefore, he should look within. The glorification of corrupt officials through appointments or indiscriminate state pardons does no good to the image of Nigeria. Buhari’s demands for assistance from western nations to fight the scourge, though appealing, are not helped by his actions or inaction.

Buhari must take necessary measures to sanitize the financial sector, and restructure the country in ways that are expressive of fiscal autonomy for the federating units. There must be oversight to ensure banks desist from aiding and abetting money laundering and government should adopt and codify all international anti-money laundering protocols and establish effective enforcement mechanisms that money launderers will be unable to circumvent. The grand strategy should also include capacity building for anti-corruption within the bureaucracy of government, especially horizontal accountability, which involves mutual checking, annulling and righting actions and inaction of state institutions.

Above all, the proposed strategy should include remodeling Nigeria’s politics, removing its current commercial value and making it attractive only to genuine servants. The point must be stressed that corruption is a serious socio-economic and political issue that should not be treated with kid gloves. The time has come for the government of the day to tackle this challenge headlong. There is need to articulate a national strategy to combat this scourge. That strategy must begin with exemplary conduct of the leadership of the country who must claim the moral high ground through self-purging. Corruption, apart from being systemic, is also partly a question of character failure, and the presidency is pre-eminently a place for moral leadership.