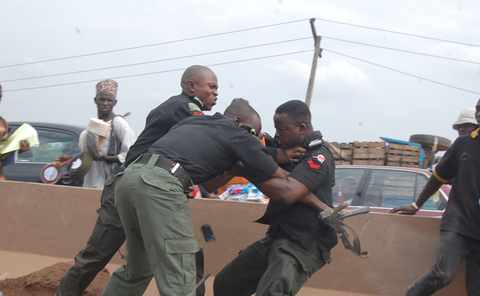 The CP who was excited when he saw the good grade of the young man, was reportedly disappointed with the applicant’s response to questions in unpardonably bad English.
The CP was said to have been more disappointed following the English Language graduate’s inability to spell the word, ‘encounter’.

Alkali, was said to have vowed to disqualify anyone who did not live up to expectation in the area of conduct and defence of their results during the recruitment.

Alkali confirmed that the second class upper division English Language graduate was unable to express himself. He said he would not recruit such a person who could not defend his result into the Force. The CP who was not happy with the way and manner those who did not merit their grades were honoured by the tertiary institutions they attended, vowed to personally screen entrants into the Force.

The state Police Public Relations Officer (PPRO), Mr. Samuel Jinadu, confirmed that some suspects had been arrested for falsification of results. He, however, did not give the figure, saying that it was still being compiled.

Permalink Reply by Bozeykeng on August 25, 2011 at 4:42pm
Nice one, other government agencies should adopt the approach and help weed such culprits but more importantly re-instill some value in the quality of education in Nigeria.

Permalink Reply by Chomsy on August 26, 2011 at 9:35am
Thats a development in the right direction.