Shock ! Steven Keshi is Dead - How He Died

Stephen Okechukwu Keshi, former Nigeria captain, manager and giant of African football, has died this morning aged 54 of suspected heart attack. He was one of only two people to have won the Africa Cup of Nations as both a player (1994) and a coach (2013).

As a player in Nigeria, he was the fulcrum of the defence of New Nigeria Bank (NNB) FC and captained them to 2 WAFU cup wins (1983,1984). NNB won the league in 1985 without Stephen Keshi because he had been was suspended indefinitely from football in Nigeria together with Henry Nwosu, Clement Temile, Sunday Eboigbe and Bright Omokaro, for ostensibly reporting late to the Green Eagles training camp in Lagos. Incidentally all elite players were playing for clubsides in Benin, NNB and Bendel Insurance. 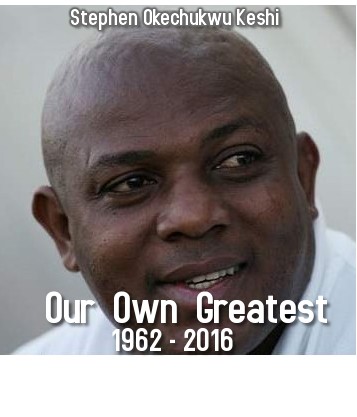 After the suspension he left for Ivory Coast and played there for a few seasons before relocation to Belgium to ply his trade with Lokeren and Anderlecht (1986-91), before playing for 2 seasons with Strasbourg in France (1991-93). He was recalled back to the Nigerian National team after about 2 years and captained Nigeria to glory in the 1994 African Cup of Nation and to Nigeria's first outing at the FIFA World Cup in the same year. As a coach he coached Togo, Mali and Nigeria. He won the Nation's Cup for Nigeria (2013) and qualified Togo for the FIFA World Cup for the first time. His time as player and coach of Super Eagles was not without controversy mostly because he didn't want to be bossed about by the NFA or external forces. Rest in peace, Big Boss. 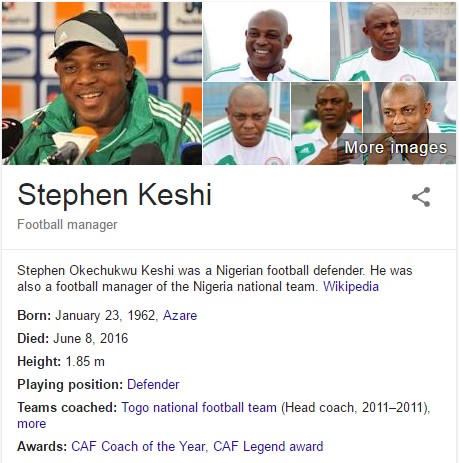 The Chairman of the Edo State Football Association (EFA), Frank Ilaboya, confirmed on Wednesday that the remains of former Super Eagle’s coach, Stephen Keshi, had been moved to a mortuary in Benin. The privately-owned mortuary, Faith Mediplex, is located on the Benin Airport road in the Edo State capital. Mr. Ilaboya quoted Mr. Keshi’s faimily member, Ricky Aburimen, as saying the Eagle’s former coach only complained of a leg ailment while holidaying at his Airport road home in Benin before he passed away. He said Mr. Keshi died on the way to hospital at about 3 am. The ex- international lost his wife , Nkem Kate Keshi only last December. They had been married for more than 30 years. She died after a prolonged battle with cancer. Mr. Keshi is survived by four children and his mother. Meanwhile, a statement on the coaches death had been released by Emmanuel Ado, brother and aide to the late Mr. Keshi, said: “With thanksgiving to God, the Ogbuenyi Fredrick Keshi family of Illah in Oshimili North Local Government Area of Delta State, announces the death of Mr. Stephen Okechukwu Chinedu Keshi’. “Our son, brother, father, father-in-law, brother-in-law, has gone to be with his wife of 35 years (Nkem ), Mrs. Kate Keshi, who passed on on the 9th December 2015. “Since her death, Keshi has been in mourning. He came back to Nigeria to be with her. He had planned to fly back today (Wednesday), before he suffered a cardiac arrest. He has found rest.” (NAN)

‘The Darker My Future, the Wider My Smile’ A Young Russian Student Speaks. Nigeria needs People Like him