Economic and Financial Commission have finally arrested outgoing Speaker Dimeji Bankole of the house of representatives.

An EFCC source told Saharareporters moments ago that the agency operatives moved in today to arrest Mr. Bankole after the agency received intelligence was planning to flee tonight.

For the past one week, the EFCC and Bankole have been engaged in a tense stand off arising from Mr. Bankole's refusal to answer the agency's summons for interrogation over series of corruption allegations. 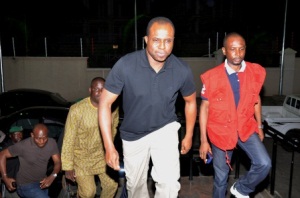 Saharareporters exclusively broke the news that the EFCC investigators had linked Mr Speaker to an account at the United Banker of Africa (UBA) through which the outgoing speaker had laundered about $1 billion.

A source at the EFCC told SaharaReporters that agency was able to arrest the speaker today as soon as it discovered he had planned to escape from Nigeria early tomorrow morning.

Last Friday EFCC agents had made an attempt to arrest the speaker from his residence but that had been rebuffed by Mr. Bankole's security protection.

The EFCC had appealed to IG to withdraw Bankole's police security to facilitate the outgoing speakers arrest instead Mr. Ringim arrived at the scene to break the siege, stating that president Goddluck Jonathan had ordered the the EFCC should retreat from arresting Bankole.

A police source said Mr. Ringim came under fire following our report of his role. He later lied that he only paid the speaker a social visit at his residence, unaware of plans to by the EFCC to arrest him.

In response to criticism, the IG of police then ordered the withdrawal of Bankole's police protection.

A source within the presidency said Jonathan who is due to be received this Wednesday at the White House did not want a baggage of appearing to American officials to be continuing the tradition of protecting Nigeria's major corrupt officials.

The source said that Jonathan then instructed the IG of police and the DG of the state security service to immediately withdraw Bankole's security detail.

A source at the EFCC told us the the EFCC was able to arrest him shortly after he lost his police guards.

In addition to the huge financial scam at the UBA, the former speaker is also implicated in car buying scandal.

Permalink Reply by chimi shirley on June 6, 2011 at 12:19pm
Ol dis stupid politicians n law makers once ur in power your all and all to them once your out ur a shit bag!....the should arrest ol of them efcc indid efcc ma ass! Corrupt agency! Mestcheww nonses

Permalink Reply by Ad´joshoke on June 6, 2011 at 2:01pm
The EFCC is doin a pretty fine Job. if the  Commission could be delivering like this, then, we should be very ready for a better Nigeria. The commission should see itself as an indepedent institution whereby  it has its full legal right to go for any one playing clever on the Law of the Land (Nigeria).

Permalink Reply by bend dome on June 6, 2011 at 2:31pm
I am happy with the arrest and at the same time angry because I know the maximum prison term for stealing that huge amount of money is 6months and nothing more....none of our Politicians is ready to fight corruption....Upon all the exposure and education the idiot called Bankole has ,the only thing he could do to help the country is to steal like some old fools we had in the past....All his degrees should be investigated too because I wonder how somebody without common sense could have studied in Harvard University.

Permalink Reply by Ajealamonia Dick on June 6, 2011 at 3:24pm
this is a warning! my problem is after conviction he will be told to serve an incredible 6 months which will counted into his detention. Let them allow each of us to take 1 billion and serve 1 year in prisionment. Lets make embezzlement punishment be capita (death) by hanging. Well I just felt the young man should have seen his office as an oportunity to bring dignity to the Nigerian youths.

Permalink Reply by Jude Eveshojinameh Gabriel on June 6, 2011 at 5:53pm
Bank of Ole

this is the  kind of thing we expoect, have they ever investigated david marrk? he is the biggest masqured in this game! oh, bcos dey ve arranged & returned him as the sent. president? i know dat luck has only distance its self from hon. Bankole! but 4 sure he will gain fredoom in a couple of weeks, provide he shares round the loot! others are angry bcos dey dont ve the opportunity the young man has. sorry mr new billonaire let the xero tolerance to corruption be monitised so dat we can ve our fair share of de deal pls i beg u.

Permalink Reply by Moses K Tawose on June 11, 2011 at 6:40pm
Arresting him doesn't make him guilty that fodders for the newspaper sales. Until there was a convictions from the court makes him one of the bad egg of the so called politicians that are cancerous eating us up.

Permalink Reply by Moses K Tawose on June 11, 2011 at 6:50pm
News for the the bloggers with nothing much ado