Passengers on Dana Air's 9am Abuja bound flight from Lagos on Monday escaped a crash after one of the engines of their aircraft witnessed bird strikes some minutes after takeoff.. 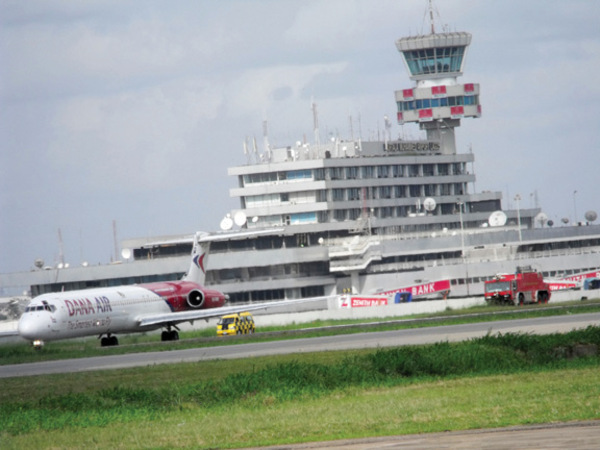 The aircraft which took off from the Murtala Mohammed Airport 2 (MMA2), Lagos with 97 passengers onboard, had to effect an emergency landing at the international wing of the airport when sparks resulting into smoke emanated from its affected engine.

"Some minutes after we took off from the airport, the captain announced that there was a bird strike and it has affected one of the engines," said Adeleke Babatunde, a passenger onboard the flight.

The situation, which made some residents of Mafoluku, a community close to the airport, run out of their houses in order to avoid casualties, was meticulously controlled by the aircraft pilot who landed the flight 9J 995 plane some minutes after the incident.

"We saw the plane shaking as large smoke came out of its engines and we had to run out for safety," said a resident who gave her name as Uchechi.

Commenting on the incident, Jacky Hathiramani, chief operating officer for Dana Air in a statement admitted that the aircraft suffered bird strike, adding that the captain had to make an emergency landing in line with the airline's safety and service policy.

"All 97 passengers and crew disembarked the aircraft safely, and the aircraft was taken to the hanger," he said. "Most of the passengers were booked on alternative Dana Air flights to Abuja while a few who preferred a refund were given." Mr. Hathiramani, however, thanked passengers onboard the aircraft for their cooperation, as well the Nigerian Civil Aviation Authority (NCAA) and all airport authorities for their responsiveness and support.

Comment by Akurise55 on April 21, 2010 at 12:10pm
WE RETURNS ALL GLORY UNTO HIM WHO HAVE POWER TO PROTECT AND DELIVER, MAY HIS BE PRAISE FOREVER AND EVER MORE. AMEN.

Comment by SAMMY on April 21, 2010 at 12:28am
All glory be to God for the protection of our beloved brothers