Service was brought to a halt yesterday at the St Paul Anglican Church, Sodubi, Abeokuta when thugs, armed with dangerous weapons, invaded the church because the priest was allegedly being too blunt in his preaching. Some of the words he used were said to have offended some highly placed individuals who attend the church.
The crisis, which pitched a section led by a former senator and Baba ijo (father of the congregation), Femi Okunrounmu against those in support of the Venerable of the Church, Olumuyiwa Ilekoya, led to the suspension of service at the church as the worshipers who gathered for the first Sunday service of the new year scattered. 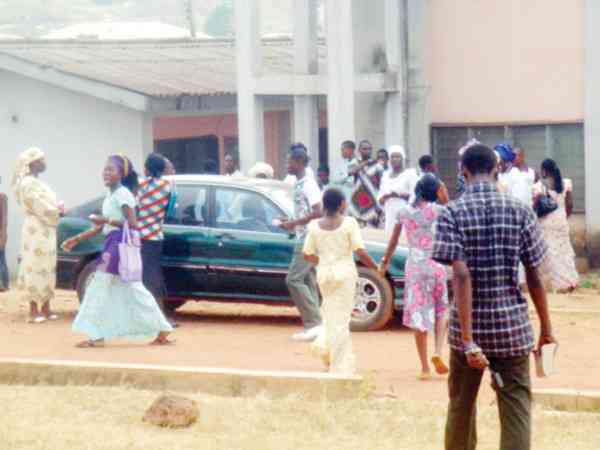 NEXT gathered that the crisis started after Mr. Ilekoya was prevented from entering the church by the camp allegedly opposed to his preaching. The offence of the cleric was traced to his sermon on the New Year eve, which a source said was not well received by some church elders. Mr. Ilekoya, at the service, warned political leaders to mend their ways or face the wrath of God.

It was said that shortly afterwards, a meeting was held where retaliatory measures were allegedly planned against the priest, to be executed in yesterday's service.

In a twinkle, what started like child-play quickly degenerated with the emergence of thugs numbering about six who came to man the church entrance and prevent the cleric and other supposed opponents of the angry elders' faction from entering the church.

Sensing danger, many worshippers left the church in droves, while the Venerable and some other elders of the church in his support relocated to Mission House, which is situated directly opposite the church.

The group that gained control of the church was said to have ordered the Church Layreader, J.A Fatade, assisted by one Akinsola, to conduct the service which was attended by those members who had not run away.

Mr. Okunrounmu, in his address to the church, told the congregation that Mr. Ilekoya was fond of raining curses while on the pulpit.

Some of the members of the church are saddened by the ugly development, and expressed their shock at the incident. Some of those who spoke to NEXT accused the church authority of turning the church into a political theater because of their individual selfish interests.

One of them said Mr. Ilekoya would be the fourth cleric of the church that the elders would fight because of the theme of his preaching.

‘Even if a Reverend preaches and the preaching affects you, what a reasonable person should do is to make amends,' said one of the disturbed worshippers, who pleaded anonymity because he was scared of being attacked.

When approached by journalists at the church premises to react on the allegation that he sponsored thugs to disrupt the church service, Mr. Okunrounmu was furious.

"How did you get to know what's happening here, who told you and who told you to come," he said. "This is church affairs and not press affairs. I don't want to comment further."

Mr Ilekoya, the Venerable of the troubled church, also refused to comment, beyond saying he had reported the case to the Bishop, who will take necessary action on the matter.

Comment by Moses K Tawose on January 5, 2010 at 1:51pm
Jesus was a good example where he comments that the house of his father shouldn't be turn to the house of buying and selling which implies that the house must be a conducive place for worshiping in truth and in spirit. Presently the house of worship has been polluted or corrupted where politics and hooliganism pervade and all this are available readily to be used for their own selfish way.
The truth has to be preached for admonition and the edification of God, but its a bitter pill which they aren't ready to hear. Until a stand is taken things wouldn't change because nobody likes it, but things can't remain same................Welcome to a new reality of life for a change.
We can't serve money or marmony its like oil and water that don't mix. Order is the first thing in heaven and it must be maintain regardless of who even the church financier he must be under the authority of God who bless him/her or who he/she was. Such person is not bigger than the church its time a stand must be taken.