Chief Gabriel Igbinedion to be Investigated for Burglary & Theft

The Federal High Court, sitting in Abuja has ordered the Inspector General of Police (IGP), Hafiz Ringim to investigate Chief Gabriel Igbinedion over an alleged attack on Prince Avan Akenzua II and over malicious destruction of his property in August last year.Prince Avan Akenzua II had secured a mandamus order against Chief Gabriel Igbinedion following a Suit No. FHC/ABJ/CS/426/2011 filed at the Federal High Court of Nigeria, in Abuja by Prince Akenzua (Applicant) with the Inspector General of Police (IGP) as Respondent.
Justice B. B. Aliyu, presiding judge at the Federal High Court, Abuja ordered that leave be granted to the Applicant to seek orders of mandamus and file such application to the Federal High Court, Benin.
After the hearing, in a motion paper filed by Alexander Oketa, cousel to the Apllicant/Plaintiff, Justice Aliyu also ordered that the case be immediately  transferred to the Federal High Court, Benin Judicial Division, and in pursuant to Order 2 Rule 4 of the Federal High Court (civil procedures) rules of 1990.
In the Motion Ex-parte date April 8, 2011 and filed on April 11, 2011 and seeking for orders of mandamus, Prince Akenzua II had prayed the court to grant the applicant’s reliefs for “a declaration that the Respondent has a statutory duty to investigate, identify and prosecute all persons suspected and or reported of having committed a crime under the laws no matter highly placed.


It also urged the court for “An order mandating the Respondent to immediately investigatethe aggravated burglary of the Applicant’s house and the malicious destruction and theft of his properties by Chief Gabriel Igbinedion, Mr. Collins Igbinidu and their accomplices on August 26, 2010. 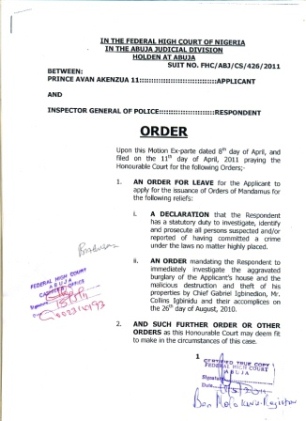 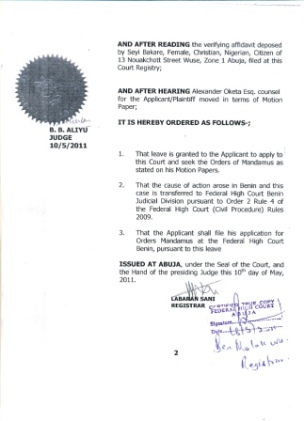 Comment by Kyla on May 24, 2011 at 11:26am
i tot Avan is married to his Daughter of Igbinedion Omosede or is this Avan Father? Who is also an inlaw to Igbinedion??  is this real??