The federal government, through its civil aviation authority, on Wednesday declared the commencement of a "100 per cent" body and baggage examination of passengers before they board any aircraft in the country. This is coming after the recent foiled attempted bombing of a Northwest Airlines flight to Detroit, USA, from Amsterdam by a 23-year-old Nigerian, Umar Farouk Abdulmutallab, on December 25, after security checks were unable to detect the powdery explosives he had attached to his body. A press release from the Nigerian Civil Aviation Authority said: "Secondary screening of passengers and the carry-on baggage should be total and performed for all departing flights at the boarding gates including body search."

"No person including crew members should be allowed to board an aircraft without passing through all aviation security screening procedures and formalities and 100 per cent examination is mandatory for all passengers," said Harold Demuren, director general, NCAA, at the authority's headquarters in Lagos.

Mr. Demuren disclosed that this declarative and enhanced security screening system to be effected at the airports is to ensure that the country does not witness another attempt of terrorism, excessive drug smuggling, and misdemeanours from travellers. 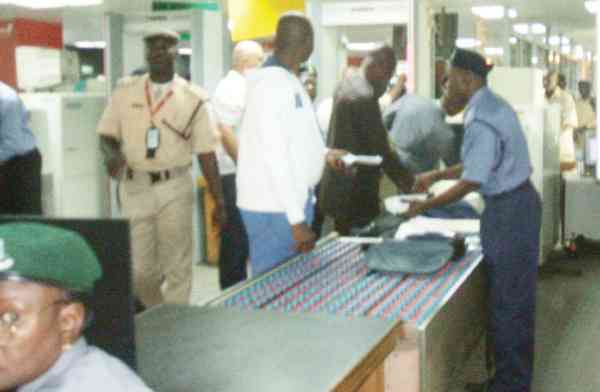 Earlier, Sam Adurogboye, media head for the authority, said that the recent attempt by Mr. Abdulmutallab should be seen as a "revolution" that beats technology in the world's aviation industry, stressing that no airport on earth has the facility to detect an explosive in fine particles.

"The explosive he (Mr. Abdulmutallab) smuggled into the aircraft is in powdered form, and I don't know of any airport in the world that has a machine which can detect an explosive substance concealed in such form," he said.

Meanwhile, since the recent attempted bombing incident, the airports, especially the international wing of the Murtala Mohammed Airport (MMA), have witnessed an increased presence of security operatives, both police officers and aviation security personnel.

"Genuine passengers are the ones suffering this mess, because it is so embarrassing how these stern officers here treat us all in the name of ensuring our safety," Greg Anozie, at the international airport.

Mr. Demuren disclosed that all airlines operating in the country have been directed to ensure that any passenger who refuses to comply with hundred per cent screening should be denied boarding. He, however, said that some of these measures were already in place before now, stressing that the repetition is mainly for emphasis and total compliance.

Were explosives from Nigeria?

Asked if the explosive smuggled by Mr. Abdulmutallab was made in Nigeria, the NCAA boss disclosed that the ongoing investigations on the case have not revealed where the explosive was acquired, adding that he doubts if the terror suspect could have gotten the substance in the country.

"We don't produce such kind of substance in this country, and when he passed our metal scanner and other screening machines after taking off his shoes and belts, we did not detect any explosive with him," he said.

"I cannot say categorically whether he got it from here or not, but I will say that it is most likely uncertain that he got the substance from Nigeria."