Commotion Cossy as we'd like to call her because of her now legendary mammary attributes, is a personality many husbands, bachelors and young men would want to read about anytime of the day. And as a personality, Cossy has become an item many a wife would not want on their menu list or served up their tables even for breakfast.
cossy 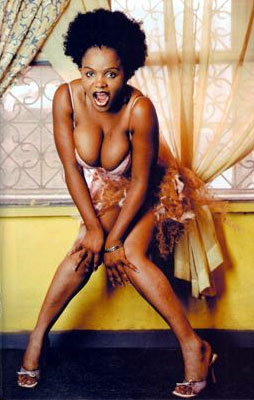 But rather than tormenting souls with her 'huge mammary gift of nature' Cossy Orjiakor the Boobs queen has been cooling her feet at the Ilasan police station, Jakande First Gate on the Lagos Island. And for more than 34 hours she did just that behind the counters.
Problem started when a suspect was caught trying to break into her Ilasan residence. The locals in the area who knew the actress very well descended on the suspect and took to the street code of conduct by meting out the ever popular jungle justice even before Cossy could appear on the scene. She was said to have gone out for her daily business.
According to her, she called the police but was told that the police had no vehicle that could travel up the bumpy road to her house.
They prevailed on her to wait until they could get a good SUV that could manage the road.
The so-called help did not come and she had to dial 767 for help and she was advised to take the suspect to the police station by herself.
She said " I felt very uncomfortable but accepted to help as the Baale of the Ilasan at this time was also involved".
So, with the Baale and the many locals who had come to help her she headed for the Ilasan Police Staton.
Unknown to her the Divisional Police Office of the Station, a certain Mr. Ekpo had other ideas. The moment they dragged in the suspect the D.P.O. accused them of taking the laws into their own hands by meting out justice on the suspect and concluded the suspect was not caught in the act at all.
After being delayed for more than three hours, she called 112 and somehow her gesture was misunderstood by the DPO who charged her for assault.
"Immediately after this, the suspect was released and allowed to go and treat himself in some undisclosed hospital" Cossy revealed. "Thereafter, I was detained with the Baale and we have remained behind the counters for the past 32 hours", an angry Cossy confirmed to this writer on Wednesday evening
When Showtime got in touch with the DPO, Mr Ekpo of Ilasan police station, the police officer confirmed the story and agreed the sexy actress has been in their custody for sometime but debunk the allegation that he has held her and the Baale unlawfully..
According to the DPO " They had apprehended an innocent man and had beaten him thoroughly without no just course. As a police officer it is my job to investigate and I have investigated that no one had any proof that the suspect in question is a buglar".
Yet coming from Cossy, the Baale and a handful of the local it is evident that they have been held under detention for more than 32 hours. This has probably put paid to all the plans for the sultry actress to celebrate her birthday today, Ocober 16th.

Comment by Toyinbo Cross olusola on October 20, 2010 at 10:38pm
police are your friends. but pls if you have one, do dine with him using a long spoon

Comment by Henry Adedayo Adewuyi on October 19, 2010 at 10:47am
I guest that DPO is a Calabar-man, so if Cossy want Justice to be done, why not offer the DPO her boobs so that she will be at the right side. may be she no wan submit to him.

Comment by OGEH DOYE DOMINIC on October 18, 2010 at 10:06pm
Dats, is naija police 4 u, afta dey will tell us de police is ur friend. plz can even de police answer dis question, dey are not our friend, dey are just dere to kill us. i bet u if i was opportune i will kill any police man i see on de road. some years back, dis same police killed my elder brother i kept still, no see wat dey have done, wat of de ones been done dats is not been mentioned on de information means. dey are just all mumu people DPO no DPO all of dem na oluku people. shaa let are just be carefull how am i not sure de so call DPO is not de broda or uncle to de thief, bad people

Comment by Moses K Tawose on October 18, 2010 at 9:34pm
Reading the story made me to be skeptical of the DPO Ekpo his intention letting the suspect go to treat himself or whatever. He gave the suspect my credibility than the public official: Baale and a star Cossy. Who should be more credible here when two were accusing one person only to let the person go he must know something that others did not know then. My gut feelings is that maybe and maybe he has personal grudges with the two detained or the suspect is their mule or errand boy doing their dirty work. I sure believe he should be investigated and possibly be charged with official misconduct and should be let go from the Nigerian Police Force he's one of the corrupt officers.