Yahoo Yahoo Boy just sent this to all his yahoo pals on yahoo messenger :"EFCC and ICPC....dey online ...dem dey always talk like whitie.......oooh ...and for networks dem dey hack into networks ...especially
starcoms,new browsing networks ....so they are hacking thru ..and they


will send money to someone via western union ...jasi bro i just dey tell
u cos i don see people wey dem don catch and it was on efcc show on
saturdays ....CAREFUL bro pass this to every one on your list Breaking
News to everyone. This is to let everyone know that Nigeria Telephone
Companies are now working with EFCC. Zain just called my pal on 27th of
feb. They are trying to get personal details about him. They called with
08021900000. Pls becareful out there" 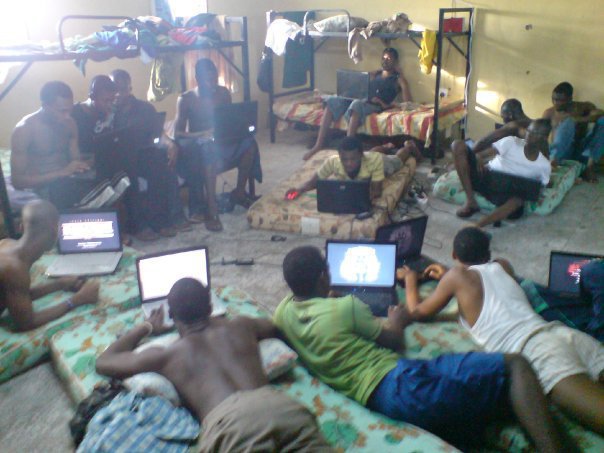 Western Union, MTCN yahoo yahoo boys, and the mugu. A partnership of Criminals with western union as the principal Partner !

1.send out bulk email aka spam with a suitable (format) Charity,abacha family,Lottery etc

2. get a reply from a mugu/maga

4. Maga sends money to you posing as a british resident via western union

5.The Western Union Agent (a Scammer) recieves a text/call from the scammer in Nigeria with the details of the WU txn like the name ,amount,control number makes forged documents like a passport or drivers license. He fills the form and signs it !


WU comes for periodic checks and forewarns the agent as they need time to get their books ready .


until the advent of the Nigerian 419 phenomenom. As far back as 1999 Nigerian scammers have routed their scam proceeds through western union


to nigerian cities and agents based in Nigeria.

but with time as the advance fee fraud became international it attached an iconic stigma to nigeria , The losers or conned or mugu/maga/maye or the Americanised slang for them suckers, became smarter and were quick to protest if requested to send
funds through WU to nigeria. This was not good for business


and a solution had to be found .Root of the problem was the location of these WU agents .How about setting up WU agents in the UK ?


Quickly as this was a matter of money and Nigerians are known to rise to the task immediately if it involved quick cash. Nigerian UK residents initially


made aquaintancers with WU Agents and a deal was struck .Most WU agents were Asian and not privy to the money making 419 empire took percentage cuts in being


recievers of these sums .


WU began to grant approvals for WU agents to small businesses like Hairdressers,corner grocery shops etc and the WU agencies slowly shifted to Nigerians and a small stream of Ghanaians within the African
community in the UK


.This began the golden age of western union as business for these dummy WU agents grew so did commisions for WU grow also as it was a double commision transaction for most


deals as they had to be routed through WU in the UK and then through WU to Nigeria (to the original scammers) each leg of this txn accruing a commision payable to WU and the WU agent it self. !

Easy as stealing money from a baby.


But Then WU started to get complaints fron the mugus and magas and not wanting to be the spoilsports decided to investigate and what they found was alarming !


There was indeed serious 419 money laundering going through them !

Reprisal time you would think ? hmmmmmm yes uh uh .. hell no ! some of these Agents with ghost Receivers were pulling in close to a 100,000pounds a day and with WU charging at least 5percent.One of these shops was taking care of area targets !


How can a small barber shop have a footfall of twenty people all day yet you received over a 100,000pounds about 25million naira ! and sent about 60percent of these funds to Nigeria ! and WU does nothing ?


Well no The art of stealing can be elevated to the art of stealing aiding & abetting,error of omission and making it legal according to the laws of the land .WU pays tax to the UK
and this is good money for the Her majestys Revenue and customs. The
british poliuce largely ignores these activities and focus more on the drug
threat and gang violence which is more ruinous to their society as it generates
little or no tax .. If this was not so why do they sit back and watch WU prtner
with scammers.


To keep this credible,WU then went on a public flogging and suspended a few agents over non compliance received through them and then the inverse inquisition began as WU area managers
went around “educating” their
agents on how to detect fraud they were perpetrating ! LOL ! !!!!(laugh out
loud !)


Then money transfer became very competitive as more and more people got into the money transfer business and Companies like Fexco another WU derivative and Moneygram became very active in taking a
market share in International Transfer.MG or mama gee as moneygram is known got
into the market and gave licenses to these corner shops in an attempt to beat
WU .MG is American and their Standards and policies are quite strict towards
laundry.


As at 2007 there was a steady crop of American Mugus who preferred to send money via MG as they became wary of WU any Nigerian MG agent therefore had a gold mine sitting in his laps and the MG was reserved for such stubborn mugus.by mid to late 2008 MG
introduced another set of guidelines to check Passports and other ID of individuals and required a photocopy of
the ID sent in for every transaction.Nigerians not to be outdone were more than
ready to make fake ID which cost about 40pounds each. This cost was borne by
the scammer who sent in the the MG Message control number (MTCN) or “control “
as it is called by scammers. Then the big shock came as Mugus began giving
feedback to MG who did a thorough audit of their Agents branches and found that
a good number of them in the peckham,dalston,woolwich,canning town areas were
actively involved in the money laundry of 419 scam proceeds.


MG quickly closed down such shops and instated new controls that required the id cards to be passports and had to be verified first on line via their databases .That was the beginning of the end of MG for the scammers .

Major compertition out of the way WU re-embarked on their Anti Fraud campaign but this time with a twist as specific Agents were Forewarned of audit and assurance days which contravened the policies of
surprise audit checks by WU audit dept.
A certain Area manager in east london used to


Call the 419 WU agents and warn them when they were coming for audit checks.

Not all money sent via WU to Nigeria is fraudulent but about 85percent of regular funds recived by the same persons is as there are companies who charge even much cheaper than WU and offer the same service. Any
Bank in Nigeria that acts as a WU agent should be wary of the same individuals
who keep coming to recive WU.In most cases they are fraudsters and scammers !

Who are those involved:


It is one thing to be a yahoo yahoo boy in Nigeria but a completely different thing to get the proceeds in nigeria.Lets assume the mugu sends 1000pounds(150,000naira) the Agents take about 5-10percent depending .
There are “control” pimps who act as intermediaries between the yahoo boys in
nigeria and the WU 419agents in england.A lot of these WU agents are Business
centres and Cybercafes owned by respectable nigerians who act as fronts for WU.
They are usually located in busy spots to fool people into thinking they are
doing legit business and another way to detect them is if you want to recive
legit WU money they usually decline as they tend to hold on to cash as much as
possible.But if you want to send money legitimately they are your best friends
as they need the cash to pay off local “control pimps” in the uk.

It is a very intense accounting business.


1.A steady crop of young Nigerian student studying in the UK do this as full time jobs and are liviing very large on the proceeds .Our sources indicate that slowly ladies are being initiated into this new form of Trading in MTCN.In short one of the
target shops a lady came and was enquiring if they do control as she had yahoo
yahoo boys connections in nigeria .


2.There are reports of it being a family business in some locations as audit checks require a complete rewriting of the send and receive forms with different handwriting and signatures and in some cases madam and kids are
called in to the family business as charity begins at home and anyway they are
more trustworthy !

3.A list of individuals and shops trading in london and thriving with pictures and conversations is to be published after this article.Please stay Tuned on 9jabook.com rebraining 9geria !

Comment by Cyril on March 25, 2010 at 8:50am
DON'T BLAME DE YOUTH, FOR LONG LONG TIME AGO PEOPLE SAY DE TIME SHALL COME ACCORDING TO OUR GREAT MUSIC ICON ORITS WILLIKI

Comment by Moses K Tawose on March 25, 2010 at 6:16am
You can't blame them and neither the government, but we've lost out on our first love the basic foundation.......Ise ni ogun ise ise la fi ndi eni giga etc. The environment has been compromised and the foundation of the fabric is bursting at the seams and sinking fast. Until we can go back with the help of God can we do it.

Comment by Fadeyi Tope on March 24, 2010 at 10:50pm
this is getting very serious as it gets even more advanced,but as always there are advantages and disadvantages.This is an impressive article on the 419 phenomenon,keep it coming 9ja book.

Comment by Akin Osunlaja WebLagosian on March 24, 2010 at 6:58pm
men this is serious ! is this for real ? are these bunks in the picture a school of some sort for yahoo yahoo , na wa o do these chaps still make money from 419 ! doesnt everyone know by now ? nice work 9jabooks