Female Mechanic Off to America no boyfriend yet but not becasue am a mechanic !

I don’t have a boyfriend and my being a mechanic has got nothing to do with it - Says 24-year-old lady mechanic
By Bode Adewumi, Lagos
Sunday, September 6, 2009
Given another personal situation, Miss Lillian Kekong Thomas might have been a beauty queen, strutting her stuff on the catwalk. Well, okay, height might have been an issue. At 5 feet 3, she might have been literally passed over by most model scouts. But if they were out looking for ladies to model for a body cream, they most certainly would give Thomas a serious consideration, because what she lacks in height, she makes up for in smooth, unblemished skin and a good set of teeth. 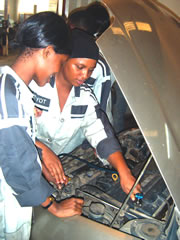 “My skin is just a blessing from God. I don’t have any special cream or anything. My great grand-father was an albino, I don’t know if that is part of it. And for the lack of scars, well, I owe that to God too. Even though growing up was tough, I’ve managed to be without any skin problem and have never been involved in any accident serious enough to leave a lasting scar’’, says this 24-year old indigene of Cross River State.

She is one of the 40 ladies who recently graduated from three-year training in automotive repair at the Lady Mechanic Initiative (LMI) workshop in Victoria Island on the bill of the MTN Foundation. She had finished O’levels and was unable to further her education due to poor finances when she came across a flyer asking for applications from ladies for a course in auto repair to be supported by the MTN Foundation. She signed up for the programme.

Asked why, of all vocations that a lady could have delved into, automotive repair was her choice, she smiles and says, “I chose this in order to be different. You can find so many ladies going into hairdressing salons and tailoring workshops. But you can’t see ladies going for a job like auto repair. So I decided to join it because I wanted to do something different from what people are doing out there.”

But ladies avoid being auto mechanics for loads of reasons, chief among which are that it is strenuous and, as some would insist, unladylike. Being smeared in darkened engine oil for the most part of the day, growing coarse palms from handling tough tools and reeking of petrol like a filling station are all grim prospects that most ladies would shudder to contemplate.

Thomas admits that it is a strenuous job, which sometimes proves severely tasking for a lady. But she adds that technology has advanced to a stage that some of the hard parts have been simplified. “You know, these days we have special tools that you can use to loose tough bolts and nuts and do whatever you want to do. As a lady mechanic, one will just have to invest more in those tools”, she says.

She also believes being a lady mechanic does not make her less attractive to the opposite sex. She argues that being a mechanic does not mean that one should be dirty. “A dirty person is a dirty person, whether she is a mechanic or she works in a bank. As a lady mechanic, when you are working on a car, you should have no issues with engine oil smearing you and all that, but the moment you are done with the day’s work, you clean up and freshen up. Nobody knows you have spent the entire day under a car”.

So does Thomas have a boyfriend? The answer is no. “I currently do not have any boyfriend and that has nothing to do with my being a lady mechanic”, she says emphatically. According to her, at the right time, the man of her dreams would come along.

Describing the three years of training she says, “When I started it was so hard but you know everything comes from the heart so I made up my mind to do it for the rest of my life and I promised myself that I was going to do it and I think I am enjoying it now because they say the end of a matter is greater than the beginning”.

When asked about embarrassing moments she has had in the course of her training and internships, she said “ it is when I go out there to work and the guys are like, what are you talking about. This girl, fix my car? Does this one know where the gear lever is? I feel embarrassed. But at the same time I feel challenged to prove them wrong and when I am able to, I am happy. For instance, there was a day Sandra (LMI founder) was taking some of us out. We boarded a danfo (commercial bus) and it broke down. The conductor tried to fix the problem without success and we offered to help. The man just shoved us aside. After he got frustrated, we offered to help again and one of us fixed the problem within minutes. The conductor refunded our money in appreciation”.

Thomas who has immediately secured employment with Toyota Nigeria, Eket, in Akwa Ibom State says she has no regret whatsoever opting to be a mechanic. She couldn’t have had any, considering the doors of opportunities that this decision has opened for her. She has met with important figures she never imagined she could meet since she joined LMI.

“Earlier this year, we were at Aso Rock where I shook hands with the first lady and took personal pictures. I am going to enlarge it and keep it in my living room!” she gushes. Apart from that, Thomas is among 10 other girls from LMI selected to travel to the United States of America for international exposure in a few weeks with the assistance of the American Embassy.

“It has simply been wonderful. I don’t think I would have had this opportunity, if I had chosen something else” says Thomas, who admits she would have been a barber if she hadn’t opted for auto repair. I thank all the people who have made me who I am today: Mrs. Sandra Aguebor-Ekperuoh and the MTN Foundation. MTNF tried for us and I can only say a big thank you to them because if I want to give them money it would never be enough. I also promise to help other people out there so that they can see how appreciative I am”.

So where does Thomas intend to be in the next few years? “In the next few years? I really don’t know, but I hope to be doing a lot of travelling to different places to help people where I can, because Sandra and MTNF have helped me too. I intend to impart this knowledge to other ladies or girls out there that are not privileged, but are interested in learning”.

When asked to advise younger ladies, she says “My advice to them is that they should go for whatever they feel is best for them. You know it is better for a woman to have something she is doing so that any man or guy they are dating will have value for them, you understand. So I will advise every woman to look for something to do to live a better life

Comment by olamide on September 7, 2009 at 8:08pm
am a hand working man and i love ladys that are hard working.so keep it on.

Comment by Yinka Akinnadeju on September 7, 2009 at 2:50pm
That is good aleast what a man can do a woman can do it beter.

I 8 2 Tell you this But Barca got Munched by a Messiless Bayern :) Bayern Midfielder, Goretzka: It Was Fun Embarrassing Messi