A former Chief Justice of Nigeria, Justice Muhammed Uwais, has disclosed that the late Chief Gani Fawehinmi rejected his advice on the national honour, which Gani was nominated for in 2008. 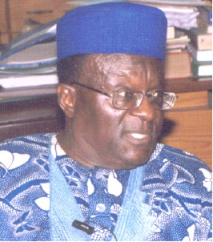 Justice Uwais, while speaking with newsmen, on Wednesday afternoon, at the Ikeja home of the late Fawehinmi, stated that he had advised Gani to take the national honour.

Uwais, who desctribed the late Fawehinmi as a “principled and dogged fighter for the downtrodden, stated that Gani had on receiving the nomination letter of the honour, called him to seek his advice.

Uwais said: “Sometime last year, he was to be awarded a national honour and it was conveyed to him. He called me from London and asked for my advice. He wanted to know if he should accept or reject the honour.”

The retired chief justice further stated that he had told the late Fawehinmi that the honour was coming from the people of Nigeria and that he should accept it, to which he claimed the late Fawhinmi said, ”all right.“

He stated that it was surprising to him the following day when he received the news that the late Fawehinmi had rejected the honour through a press release that was made available to many of the major national dailies in the country.

Uwais stated that his encounters with Fawehinmi were friendly and were of mutual respect. He said that the only valedictory service attended by Fawehinmi was the one in his (Uwais’s) honour.

He stated that he would miss Fawehinmi’s friendship and kindness while also stating that the late lawyer was a very principled person, who fought for good governance.

Meanwhile, more people have continued to pay their respect to Fawehinmi as the chairman of DAAR Communication, Dr. Raymond Dokpesi, Dr. Tunji Braithwaite, Donald Duke Manufacturers Association of Nigeria (MAN) and some other Nigerians were at his Ikeja, Lagos, home on Wednesday.

Dr. Dokpesi described Fawehinmi as a “great patriot, who led and defended the ordinary masses of Nigeria.” He also stated that Gani offered his legal services free of charge to both Independent Broadcasting Association of Nigeria and DAAR Communication “during their trying times.”

He prayed that the Almighty God should “grant Gani’s immediate family and indeed all Nigerians, the fortitude and courage to bear the irreparable loss.“

Dr. Braithwaite described Gani as a “colleague and brother” in their early days of their beloved profession. He said he particularly admired Gani’s “ultimate compliment” to him.

He stated that Gani had once told him that he (Braithwaite) inspired him (Gani) and that he appreciated his struggle for human rights. He said that history would judge the late Fawehinmi kindly. Rasheed Adegbenro, the Director of Corporate Affairs of MAN, who represented the president of the association to honour Fawehinmi, stated that the late legal icon “touched the conscience of the society and gave meaning to fairness and justice.

It was also disclosed that the late Chief Fawehinmi, SAN, handled more than 5,000 cases for many Nigerians at no cost.

The Minister of Justice, Mr. Michael Aondoakaa, disclosed this on Wednesday at a valedictory court session organised for him by the Nigerian Bar Association (NBA), in conjunction with the Lagos State Judiciary at the premises of the Lagos High Court in Igbosere.

The Attorney-General of the Federation and Minister of Justice, Mr. Michael Aondoakaa (SAN) described Chief Fawehinmi as a noble man, a source of hope to the masses and the pride of Nigeria.

The event which saw all the judges of the Lagos High Court and members of the bar, who were fully robed in attendance, was presided over by the newly sworn-in Chief Judge of the state, Hon. Justice Inumidun Enitan Akande.

In her address on the occasion, Justice Akande described Chief Fawehinmi as a man of great passion who stood firmly and consistently on the part of justice.

She said although Chief Fawehinmi was no more, he left behind a worthy legacy, noting that he stood tall as an accomplished legal luminary.

Justice Akande, while expressing her condolences on behalf of her colleagues on the bench to Fawehinmi’s family, regretted that he died while a new chapter was being opened in the Lagos State judiciary.

The president of the Nigerian Bar Association (NBA), Mr. Oluwarotimi Akeredolu (SAN), in his speech entitled “Gani Fawehinmi: A Dogged Fighter Departs In A Blaze Of Glory,” lamented the loss occasioned by the death of the legal luminary and noted that the tribe of genuine activists and consistent advocates of the rights of the common man was dwindling in quality and quantity.

“That the gadfly chose this period when despondency hangs thickly in the Nigerian firmament to bid us farewell makes the impact of the departure debilitating,” he said.

Akeredolu stated further that amidst the torrents of encomiums from both Nigerians and members of the international community on the contributions of this icon in the field of law and, more importantly, on his relentless crusade for the emancipation of the downtrodden, the totality of all this was yet to define all the qualities of the late Fawehinmi.

“This selfless advocate of the masses, public litigator par excellence, philanthropist, who acted as if condemned to do good, the scourge of deluded potentates and megalomaniac pimps, pious, yet unobtrusive with hypocritical display of holiness, erected monuments in good deeds which promise to lock time in a fierce battle in the centuries ahead,” he stated further.

Akeredolu, while condoling with the family of the late lawyer, stated that those who appeal to the government to immortalise him should hold their breath, saying “the best form of reminding ourselves that this strange strand of the human specie passed through this place on the planet is to continue his good deeds.”

The chairmen of the three branches of the NBA in Ikeja, Lagos and Ikorodu also delivered speeches on the occasion.

Neighbours, artisans and other sundry employees of the lawyer were full of praises for him on Wednesday as his remains were laid-in-state at the inner chambers of his sprawling law firm at Ajao Estate in Anthony Village area of Lagos State.

Pa Yemi Osobukola , one of the landlords and a close door neighbour to Fawehinmi said that the siting of the deceased’s law firm in the estate popularised the area.

Pa Osobukola expressed the hope that the late Chief Fawehinmi would make Aljana (heaven), saying that his law firm was a befitting legacy left behind for the residents of the estate who had great respect for him.

Another landlord in the estate, Ambassador Kunle Adeyemi, described the late fiery Lagos lawyer as a very good neighbour who performed his civic responsibilities creditably in the management of the estate.

Also, his security, guard for years, Mallam Abdulrhaman Sadidi, said he was encouraged to work for the deceased lawyer because he stood for the truth and he was always doing good all the time.