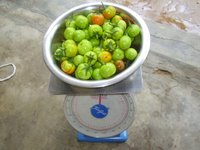 Garden egg, also known as egg plant is the fruit in season and for its lovers, either eating it raw or having steamed yam and... stew made with it is a delight. It comes in two colours, white and green.

In most African countries, this fruit is a highly valued delicacy and constituent of the African food. It also represents fertility and blessing and thus, not uncommon to find it served during wedding ceremonies in some communities across the African Continent.

No wonder, the Igbo Community in Nigeria can hardly do without eating garden eggs because of the health benefits derived from it.

Botanically called Solanum Melongena, garden egg is an economic flowering plant belonging to the family Solanaceae and widely distributed throughout the temperate and tropical regions. Members are mostly herbaceous plants, and the fruit is berry and the seeds have large endosperm and are grown mainly for food and medicinal purposes.

The fruit is very healthful and among its health benefits are its ability to reduce cholesterol due to the fact that it is very low in calories.

While speaking on the benefits of garden eggs, the Deputy Provost Graduate Administration, Federal College of Complimentary and Alternative Medicine, Ikosi, Ketu, Lagos, and Physician/Consultant Acupunturist at Green Leaves Clinic and Acupunture Centre, Ilasamaja, Lagos, Dr Ndubuisi Nwakakwa, said that garden egg is low in calories which makes it wonderful and helpful for reducing cholesterol. “A high level of blood cholesterol level, more particularly low-density lipoprotein cholesterol, is a primary risk factor for cardiovascular diseases such as stroke and heart disease and garden egg has the power of reducing these risks”.

Adding: “When compared to apples and oats, garden egg plant is more helpful for reducing cholesterol. This means that eating garden egg is better at reducing blood cholesterol than apple.

“Also Garden egg contains in raw form 15 calories per 100g but this rises when dried. When cooked in oil, it contains more than 300 calories due to absorption of extra fat”, Nwakakwa said.

In addition, he said: “Even though garden egg is generally said not to contain huge amount of

protein and other nutrients, it is low in sodium and very rich in high dietary fibre. It is also high in potassium, a necessary salt that helps in maintaining the function of the heart and regulates blood pressure”.

The Consultant Acupunturist said that garden egg is also rich in some nutrients. “Being a member of vegetable family, it contains nutrients that include beta carotene, vitamins B6, E and folate, calcium, iron and magnesium fibre”.

According to Nwakakwa, garden egg is good for sight as it has positive effects on visual functions. It is also excellent for weight reduction.

“Its consumption may be of great benefits to glaucoma patients”, he said.

A study conducted by some experts, S.A Igwe, Dora Akunyili and C. Ogbogu, published in the 2003 issue of the Journal of Ethnopharmacology on “Effects of Garden Egg on some Visual Functions of Visually Active Igbos of Nigeria”, found that eating plenty of garden egg can help to lower eye pressure in persons with glaucoma.

For weight reduction, “This is the perfect recipe for achieving weight loss within a short period of time because it is very low in calorie content, and it is why experts are encouraging people that want to lose weight to eat more of its fresh form just as they say that people that are told to protect their heart against cholesterol effects should make it their delight”, said Nwakakwa.