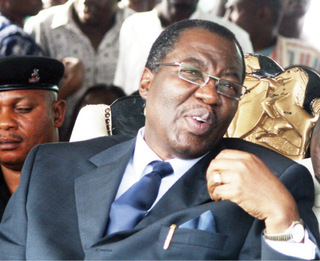 The election of Gbenga Daniel, the governor of Ogun State, as chairman of the Nigeria Governors’ Forum (NGF), has split the organisation down the line.

His election was announced at the weekend by the Benue State governor, Gabriel Suswam. The governor, who spoke on behalf of NGF, after a closed door meeting held at the Ogun State lodge in Abuja, said Mr. Daniel will steer the group’s leadership till May 2011.

The director general of the secretariat, Asishana Okauru, in a statement, said the NGF has not held any election towards producing the possible replacement of the present chairman and the governor of Kwara State, Bukola Saraki....

He said there was a distinction between the NGF, which, he noted, was a non-partisan forum for all elected governors in the country, regardless of party affiliation, and the PDP Governors’ Forum.

Mr. Suswam, while announcing Mr. Daniel as the new chairman at the end of a meeting with other Peoples Democratic Party governors, said the leadership change became necessary, since Mr. Saraki is contesting for the 2011 presidential race and could not preside over its affairs as expected.

He cited Mr. Saraki’s distraction, stating that the forum had not been able to comment on national issues as it was known for..

“Take for instance the October 1 bomb blast in Abuja and other national issues. We could not comment because we had no chairman to speak through,” Mr. Suswam said.

He added that Mr. Daniel was chosen because of his exemplary leadership qualities, based on his track record and experience as a second term governor. He maintained that he was unanimously elected by consensus by all the members of the group to coordinate its activities and assure focus.

Responding, Mr. Daniel said that he would ensure that the forum returns to its position of prestige, assuring them of adequate consultations with other governors towards ensuring continued seamlessness enjoyed in its operations for over three years. He also pledged the forum’s loyalty and support to the Jonathan/Sambo presidential ticket, as former members of the forum.

Godswill Akpabio, governor of Akwa Ibom State, said the selection of Mr. Daniel was based purely on his performance as a capable administrator with outstanding qualities to move the forum forward.

However, Ibrahim Shekarau, Kano State governor, has dissociated himself from the appointment of Mr. Daniel.

Speaking through his senior special assistant on media, Sule Ya’uSule, Mr. Shekarau said there was never a time he was part of any meeting that took the decision to appoint Mr. Daniel as the chairman of the NGF.

“To the best of my knowledge, there was never a meeting where a decision to appoint a new chairman of the forum was reached,” Mr. Shekarau said.

He particularly frowned at the manner in which a few PDP governors sat and appointed Mr. Daniel as the chairman of the Nigeria Governors’ Forum, saying the body is not entirely a PDP affair and not a partisan forum. He said as far as he is concerned, Mr. Saraki still remains its chairman.

Also, the Edo State governor, Adams Oshiomhole, has denied the purported election, describing the report as embarrassing and unfair. He dismissed the claim that any meeting was held where the decision was taken.

According to him, Mr. Saraki has reconvened a meeting of the NGF for Wednesday (November 3), saying part of the agenda for the meeting was to elect a new chairman for the group.

“I have since checked out and I can confirm as a matter of fact that there was no meeting of the Governors’ Forum. However, some People’s Democratic Party governors met at a venue that was never a venue of our meeting at Governor Gbenga Daniel’s lodge and it was at that forum that they are now claiming to represent the Governors’ Forum,” Mr. Oshiomhole said.

He explained that any governor could aspire to the position, noting that “anyone who nurses such position should be ready to persuade other governors to accept him.”

Expressing disappointment at the attitude of the governors, he said, “if a forum of thirty six governors cannot freely choose a chairman of the Governors’ Forum, then we cannot be talking about a free and fair election in 2011.”

Mr. Okauru, the director general of the forum, said the purported election “has created some confusion in the public on the distinction between the PDP Governors’ Forum and the Nigeria Governors’ Forum.

“The NGF is a non-partisan forum for all elected governors of the Federal Republic of Nigeria, regardless of party affiliation,” he said.

He confirmed Mr. Oshiomhole’s statement that a meeting of the forum is to hold next week. The group, which is an umbrella organisation of the 36 states serving governors of the federation, patterned after the American Governors Association, was formed since 1999, especially with a motive to present a smoothly united front when appearing for the monthly state council meetings, which they always attend with the Federal Executive Council.

Late last night, a statement by Mr. Saraki said the so called election of Mr. Daniel should be disregarded.

But Soyemi Coker, the factional Speaker of Ogun House of Assembly, on Sunday, described Mr. Daniel’s election as a testimony of his exemplary leadership qualities.

Mr. Soyemi, in a statement issued in Abeokuta by his special assistant (media and publicity), Ayo Giwa, said the election did not come as a surprise, going by Daniel’s “political ingenuity and enviable administrative track records.”

The rancour over the election of Mr. Daniel has led to speculations that Mr. Saraki is being shoved aside because of his indication of interest to contest for the presidency against President Goodluck Jonathan.

It is believed in the political circles that this was part of the campaign to see that Mr. Jonathan has the support of most governors, since Mr. Daniel is the coordinator of his campaign group in the South West.

Comment by Moses K Tawose on November 2, 2010 at 4:18am
He might be qualified by years served as the Governor of Ogun State, but he has been a lightening rod in the State where he rules. It has been one controversy or the other which has debilitating to his reign. He's more of a liability than help to anything associated to him. He doesn't has what it takes to be a good leader.

Comment by Ak Man on November 1, 2010 at 7:38pm
this man that single handedly destroy OGUN STATE now the chairman of NGF? wonders shall never end.

Comment by Osamuyi on November 1, 2010 at 11:13am
Same old story......."Dog eat Dog" .
The NGF is suppose to be a neutral forum, where state governors regardless of political affiliation can under one umbrella, act as a strong lobby group. It is a shame that at this stage the other political parties have not been able to produce a credible flag bearer to contest the 2011 presidential elections. Is it a case of lack of funds or lack of credibility?

Comment by yomi olayinka on November 1, 2010 at 10:04am
nigeria will one day be saved from the hands of thieves, tyrants and hipocrites.

Comment by Engr. Joseph O.E. Enemali on November 1, 2010 at 9:10am
What impact has the so called forum made in the lives of Nigerians? Please they should stop this nonsense thing they re doing in our land, otherwise EFCC should commence investigation of the NGF immediately.

Comment by HASSAN M.K SARKI on November 1, 2010 at 9:06am
Shame on you Suswan for using the governors forum as a political tool, bringing an antidemocrat like gbenga daniel.If you people are sincere, you and gbenga daniel should not be elected as chairmen because you are both coordinators of jonathan campaign group.

Comment by oyekanmi olukoyejo on November 1, 2010 at 9:03am
Wonder why Governors of state behave as if the aren't a learned people.i beg,let them all sit somewhere......shame on them