Ghana, which will pump its first oil for export next year, has issued 11 exploration licenses and the prospects of more finds are “extremely high,” the state-owned Ghana National Petroleum Corp. said. 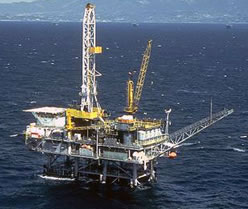 “It’s looking very exciting and there’s a lot of potential,” said Michael Aryeetey, senior geologist at the GNPC, which oversees the industry.

In 2007, Tullow Oil Plc made its Jubilee oil find offshore Ghana. The discovery, which will start production in 2010, could contain reserves of as much as 1.8 billion barrels, Aryeetey said today at a conference in Takoradi, about 250 kilometers (155 miles) west of the capital, Accra.

Vanco Energy Co., based in Houston, Texas, has recently started drilling at a block off the country’s western coast, while Vitol Group, a closely held Geneva-based energy company, plans to begin exploration at a block south-east of Jubilee later this year, Aryeetey said in a separate interview on the sidelines of the conference. “If Vanco finds oil it could be bigger than Jubilee.”

While most exploration has taken place off Ghana’s western coast, near its border with the Ivory Coast, GNPC expects the eastern region to yield finds too.

Afren Plc, a London-based explorer, has been awarded an exploration license on the eastern coast near Togo. “We are very sure that we will make a find there, the geography is similar to Nigeria,” Aryeetey said. Nigeria is Africa’s largest oil producer.

Off Ghana’s central coast, Nigeria’s Oranto Petroleum Ltd. has been given permission to explore around Saltpond, where Ghana’s sole oil rig currently produces about 700 barrels a day for domestic use, Aryeetey said. “We believe that there is potential all around that area.”

The corporation, which keeps a minimum of 10 percent of each exploration block, eventually plans to begin searching for oil by itself, Aryeetey said. “Once we begin to receive funds from our stake in Jubilee and other discoveries, we’ll have money to take a block and explore,” he said.