COULD the Holy Spirit have removed the pants and skirt of a lady as claimed by a pastor while praying for her?

PHOTO:The ‘deliverance’ was performed in the vestry of this church. 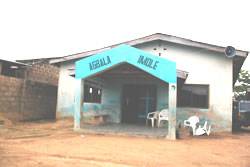 The pastor was still being investigated by the State Criminal Investigation Department (SCID) of the Oyo State Police Command, over allegation of rape, told his interrogators that he
only watched the lady’s pants and skirt being removed by the Holy
Spirit while he prayed for her.

The minister, Pastor J. Odesola of the Christ Rock Apostolic Church, Agbala Imole, Olodo, Ibadan, allegedly had carnal knowledge of a 17-year-old Unified Tertiary Matriculation Examination (UTME) candidate
on Thursday, 15 April, 2010, on the pretext that he was performing
deliverance for her.

The lady (names withheld), told Sunday Tribune that on Monday, 12 April, 2010 at 2 p.m, she had gone to see Pastor Odesola for prayer over a dream her mother had concerning the UTME she was to sit for on
Saturday, 17 April, 2010.

She continued: “My mother advised me to see the pastor for prayers so that I won’t have any problem with the exam.

“The pastor told me to come for a programme on Wednesday, 14 April, 2010 tagged Atamatase and also for a special prayer the next day (Thursday 15 April, 2010) to cast away the evil spirit from me.

“On that Thursday, as I arrived the church at 7.30 p.m, Pastor Odesola instructed me to stay in the church because some visitors were with him in the vestry.

“At 8 p.m, he asked me to come into the vestry. He asked if I was ready for the prayer and I said yes. He told me to stand up, placed one hand on my head and the second hand on my chest.

“He murmured some words into my ear and blew air on my face, commanding the evil spirit to come out of me.

“May be I slept off at that moment, I can’t remember. I just found myself on the floor when I woke up, no strength was left in me. He pushed my blouse up and placed a Bible on my tommy.”

“He was now praying, quoting Bible verses. After that, he fondled my navel, blew air on my face again. He touched my forehead. I did not react. He touched my chest and placed his hand on my tommy; he tickled
me at my lower abdomen, then waited to know my reaction.

“He got up, moved about the room, which was not properly illuminated, casting out demons. At this point, I slept off again. When I woke up, I noticed my pant and skirt had been removed. The pastor was
not in the room.

“Few minutes after, Pastor Odesola came in, he climbed over me. I tried to push him away but I was too weak. He asked if I don’t want to be delivered.

“I slept off again, but when I woke up I noticed his finger was in my private part. He fondled my breast. I struggled to remove it but he charged at me saying I should relax, that he was casting out the demons
in me. He now said: “Jesu Oluwa wa, adura re tigba.”

“He held me to himself, forced me to sit down because I was still on the floor. He took a torch, showed me fluid on the ground under my legs. He said it was urine I passed out during the deliverance prayer.
He then said: “pelu eleyi to jade nisisiyi, isegun tide.”( with this
out of you, your prayer has been answered.)

“Pastor Odesola told me not to feel disturbed, assuring me that I will pass the UTME. He returned my She said further: “I had to call my aunty because I was so disturbed. I could not revise for the exam
again. Whenever I opened my book, what I saw was the picture of the
man and the scene.

“That was how my parents knew what happened. My parents were enraged, my mummy collapsed two times over it because everybody blamed her for asking me to go and see the pastor.”

The matter was reported at the Area Command Office, Testing Ground and the pastor was picked by the police on Wednesday, 21 April, 2010.

During interrogation, he was asked if he had seen the lady’s nakedness and he said, “yes.”

But when the police demanded to know who removed the lady’s pants, Pastor Odesola said it was the Holy Spirit. They asked him to perform same miracle on a police woman interrogating him for her pants to be
removed by the Holy Spirit, but he kept quiet.

The parents of the girl took her for medical examination and the report indicated that the girl had bruises on her private part. The girl also claimed to have lost her virginity in the process.

However, the members of the pastor’s church, who came to see the pastor at the police station, defended their pastor who they called “Daddy.” They said their “Daddy” was not that kind of person. They even
accused the lady of framing the story.

Pastor Odesola, who was on Friday, 23 April, 2010 moved to the SCID, Iyaganku, Ibadan said he neither fondled the girl’s breasts nor thrust his fingers in her private part.

Whereas he denied having sexing with her, he admitted that he placed his hand on her private part and on her breast while praying for her.

Meanwhile, the Federation of International Women Lawyers (FIDA), Oyo State chapter has declared its interest in the case.

Speaking with Sunday Tribune, the state treasurer, Mrs. Dupe Awosemusi, said FIDA was actually concerned about the girl’s life.“We don’t know what the pastor has taken from her since she was not
conscious in the course of the session,”FIDA said.

“We are also bothered about the security of life of the girl. When you talk of Christendom, this man, being a pastor, is a slap on the body of Christ.

“Things like this should not be covered up. There are so many cases of rape and child abuse nowadays. It was either the suspects were looking for money or spiritual power,”she stated.

Comment by abiodun on May 21, 2010 at 12:16pm
is indeed is a miracle. let the rule of law do the miracle on the miraculous pastor.and for the parent of the girl let them take their full lesson from this and know that their is no short cut to success, u have to pay the necessary price to attain to ur goal.

Comment by Babalola oluwatosin on May 14, 2010 at 9:33am
is a lesson to those that are looking for miracle here and there,so beware my Bible tells me if you have faith and ask anything in his name know that you have it,is not a bad thing to ask for pastor in prayer but let there be witness in the process.that is sign of the end time many we come in his name.may God have meacy

Comment by Bassey O on May 12, 2010 at 1:40pm
God deliver us all from devilish manipulation

Comment by Duan Fanimo Ifeloju on May 12, 2010 at 12:57pm
Sorry ooo, but a lesson must be learnt here, you dont need just a pastor to pray over you... Bible says where two or three are in agreement... besides that person seeking prayer. Also a leader should never place themselves in any place where evil can be used against him... elders ... Deacons .... Christians... if some one needs a ride for exam...make sure it is no alone you are with someone that can give witness to nothing happened... The writer of Colossians warns us to be on the watch for people who are trying to take us captive with deceptive philosophies. He warns us that people will base their philosophy on tradition and the ways of the world, yet those ideologies are hollow. I am not saying this child did... tell all others be very wise be careful tread softly...for evil is looking to capture any and all who will be found weak in spiritual walk with God

Comment by adesina awosanya on May 12, 2010 at 11:13am
may God have mercy and continue to deliver us. Nemesis will keep catching up with fake men of God

Comment by THE QOHELETH on May 12, 2010 at 9:58am
I pity the young girl in this unfortunate situation. But it is high time we looked into the case of people who look for easier and unethical ways of achieving results. Instead of the girl's parents encouraging her to read, they sent her for miracles. See how the pastor performed miracles on her. The mother should be arrested as well as an accomplice.

Comment by SoulZealla on May 12, 2010 at 7:29am
open ur eyes peeople and kno what church you attend, plus the people.

Comment by Yusuf Taiye on May 11, 2010 at 7:57pm
My thinking is that he should be castrated. As long as the consciousness of the girl was lost when he did the act, I think there is more than meet the eye. For all I know, He should be disgraced nakedly all over the street where he resides as a detriment to others who may wish to do same. T his blind followers, I wish them good luck.