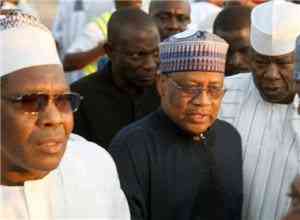 Maryam whose body arrived the Nnamdi Azikiwe International Airport, Abuja at about 11 pm yesterday was brought to Minna, Niger state capital in an Air Ambulance, arriving the mansion of the Babangidas in a long motor cade.

The corpse arrived the home at about 11.45 pm accompanied by Secretary to Government of the Federation (SGF) Alhaji Yayale Ahmed, Sani Ndanusa (Sports Minister) and Adamu Aliero, (FCT Minister) on behalf of the Federal Government.

Prayers for the reposed of the soul of Maryam began at 12.45am led by the Chief Imam of Minna, Alhaji Isah Fari.

The crowd surged as the prayers moved in order to catch last glimpse of the former glamorous first lady.

There were also former military colleagues to Babangida, Gen. John Shagaya, (rtd) former Security operative, Umaru Shinkafi, Captain Nogie Megason, Tayo Amusun, wife of Kwara State Governor, Mrs Toyin Saraki, PDP Chieftain, Tony Anenih, former CBN Governor, Prof. Chukwuma Soludo, and a very large number of National Assembly members, and past and present members of the political class.
Her interment came a day earlier than scheduled because of what a family member explained "in order to curtail an uncontrollable crowd since security operatives might not be able to control the surging crowd if she was buried in the day."

Earlier, it was a heart-rending spectacle yesterday as Gen. Ibrahim Babangida wept profusely on arrival at Minna Airport at 5.45 p.m. in a private aircraft to await the return of the remains of his wife, Maryam, who died in the United States (U.S.) at the weekend.

She passed on last Sunday at the Jonsson Comprehensive Cancer Centre (UCLA), Los Angeles after a battle with ovarian cancer.

Gen. Babangida returned to receive the body, which will be buried at 11:00 a.m. today beside the family mosque at his Hilltop Mansion in Minna.

The uncontrollable weeping of Nigeria's former military President for eight years forced many people at the airport to burst into tears.
Babangida was received by his son-in-law and Zamfara State Governor Aliyi Shinkafi as well as the General's first son, Mohammed and others.

Babangida, dressed in black caftan, arrived at his residence at 6.10 pm in company of Niger State Governor Babangida Aliyu and others in a 38-seater coaster bus bearing the official seal of the state government.

Meanwhile, the three-day fidau prayers for the repose of the soul of the late former First Lady have been held in Minna.

The two and half hours prayer was performed by the chief iman of Minna Central Mosque, Alhaji Abu Fari who prayed for forgiveness.

The prayer was attended by immediate family members, sympathisers and other dignitaries including former head of state, Gen. Abdulsalami Abubakar, Aliyu and Shinkafi, and the Minister for Interior, Alhaji Shettima Mustapha. Erstwhile governor of Niger State, Alhaji Abdulkadir Kure and Alhaji Dettijo Aliyu, a former commissioner for heath in the state and cousin to Gen. Babangida, were also there.

Others included the Governor of Osun State Olagunsoye Oyinlola and former Minister for Works and Housing Tony Anenih.

Gowon noted that the late Maryam was an exceptionally good first lady who dedicated her life especially to the rural women and Nigeria in general.

Gowon said: "It is a very sad occasion for all of us and she will be sorely missed by her husband, Gen. Ibrahim Babangida as well as the children who were left behind.

"We hope that they (children) follow her footsteps and ensure that they maintain the legacy she left behind through life."

Gen. Abubakar remarked: "She has really played her role as the first lady of Nigeria. She brought the Better Life Programme for the rural woman and I believe that through her office the rural woman has been brought to the fore and a lot of things have been done for the rural areas. She has played her role as the First Lady and as set the tone of how first ladies should contribute their own quota in the affairs of the nation."

Oyinlola said: "It is my own person that I have lost; I have been with the family since I was 20 years of age and I pray that the good lord continues to uphold the family."Chief of Army Staff (COAS) Lt. Gen. Abdulrahman Dambazau yesterday condoled with Babangida.

In the letter dated December 28, 2009 and addressed to Gen. Babangida, he said: "It is with deep sense of grief that, I, on behalf of the entire Army, commiserate with you and your entire family...

"Her Excellency was a loving mother to all, especially the less privileged in the society throughout her life time. Her passion for the welfare of wives of officers and soldiers when she was the National President of Nigerian Army Officers' Wives Association was remarkable and a source of encouragement to all those who attained that post after her. She will surely be missed and remembered by all in the Nigerian Army and the country at large.

"It is my fervent prayer that the Almighty God will grant you and those she left behind the fortitude to bear the irreparable loss. Once again, please accept our heartfelt condolences."

NBA, in a statement by its Assistant Publicity Secretary, Gbolahan Gbadamosi, on behalf of the NBA President, Mr. Oluwarotimi Akeredolu (SAN), noted that she was " a pride to African women."

According to the Association: "The sad news of the death of a friend of rural women after succumbing to the terminal ailment came to us as an unkind piece at this period.

"It is on record that her pet project- Better Life for the Rural Woman brought succour to underprivileged women. Her legacy on this score is worthy of emulation.
"We are consoled by the effort she put in the service of humanity and pray that God will give the Babangidas the courage to bear the irreparable loss".

In a statement yesterday, Arisekola-Alao said: "Every soul shall have a taste of death and Allah will, by his mercy compensate us of our deeds on the day of judgment and those that the Almighty Allah admitted into the garden would have succeeded and Hajia Maryam Babangida will insha Allah be one of them.

" I hereby express my heartfelt condolence to my brother, Gen. Ibrahim Badamasi Babangida, former President, Federal Republic of Nigeria over the death of his wife, Hajia Maryam Babangida. "Please, take consolation from God that our departed wife and mother played her part very well... History will never forget her. May the merciful Allah accept her. Amen."

Comment by DAVID DAFE ADOMI on January 2, 2010 at 3:16pm
she will always be remembered.

Comment by musa sani on December 31, 2009 at 10:34pm
she will live to be remember wat a mother may her soul rest in peace

Comment by omojola olatunji patrick on December 31, 2009 at 5:01pm
MAY HER GENTLE SOUL REST IN PERFECT PEACE, LIKE THE ADAGE SAYS NOBODY IS ABOVE DEATH, MAY THE ALMIGHTY GOD FORGIVE HER.

Comment by Moses K Tawose on December 31, 2009 at 2:47pm
We're human and we cannot be perfect and if we're would be like our creator. Since this is the fact let us accept their infallibility and express our condolences to the bereaved family in our own little way. Death is the ultimate and we all owed it.
He's human after all....................It shows he has a heart. He knows what he did and in his heart he saying am sorry, but what is done cannot be reversed. He did his best the way he knows how. May the soul that passed away rest in peace and whatever she might have done be forgiving to her by Allah.

Comment by abubakar mahmud chanchangi on December 31, 2009 at 2:45pm
may her soul rest in peace