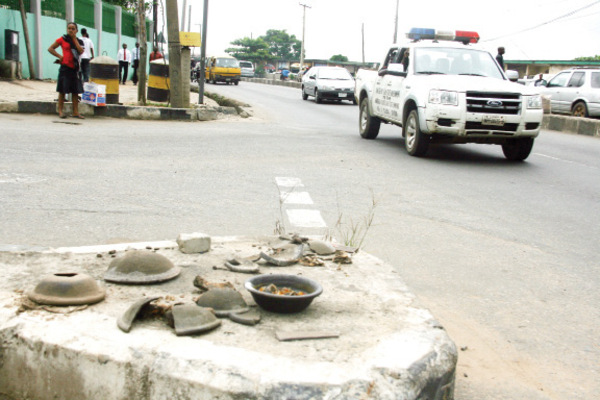 Voodoo in the city

It was about 10 o'clock on a Tuesday Night in Alausa, Ikeja, a few hundred metres from the state governor's office, a scruffy-looking middle-aged man, was swearing and cursing a teenage girl who sold fried yam and akara (bean cake) on the roadside near the Alausa Central Mosque. With popped eyes, visible even with the poor lighting produced by the kerosene lamp on the trader's table, the man pointed at the girl, speaking in Yoruba language at the top of his voice, shaking his head as he spoke.

Amongst other things, including indecipherable incantations, he kept repeating that the girl will never give birth in her life. Just like every other person at the scene, the girl was speechless for while, then started responding to the visibly angry man. The verbal exchange continued and attracted over 30 people who tried their best to defend the girl, who the man claimed insulted him.

In spite of the metropolitan nature of Lagos and the effort of the state governor, Babatunde Fashola, to transform it into a modern megacity in all ramifications, fetish practices, which are typical of some rural areas, are still prevalent. It is not uncommon to witness incidences, mainly in the course of a scuffle or quarrel, where a person threatens to deal with another with spiritual power, using clay pots and bowls containing ritual mixtures made of food items, believed to convey fetish powers, which are placed at night at some junctions, even in well paved areas.

For some Lagos residents, the sight of these bowls of sacrifice, fills them with fear, but for others, especially those to whom such sights are familiar, they are of no consequence.

Kikelomo Kayode, who lives in Ogba area, said he takes another path whenever he sees the bowls ahead. "I see them some times in the morning when I'm going to work. They say they used to put curse on it. Anytime I see the thing from far I will cross over to the other side. Really, I find it strange that people do things like this in a place like Lagos. If it was one village in Ogun State or Oyo State, it would have been understandable. I think the government should do something this," she said.

But Johnson Adekeye, who resides in Adeniji Adele area of Lagos Island, where such practices are rampant, thinks the bowls have no effect. "We see them here almost every day, as far as I'm concerned, it is not a big deal. It might mean something to the people that believe in it, but for me I don't care. I'm a strong Christian; it cannot have any effect on me. If I see it, I just mind my business. In this area you will see shrines, native doctors and many people who do fetish things. You just have to be careful with how you relate with some people. They say Lagos is a megacity, but some parts are just like my village," he said..

The ritual bowls are always seen at T-junctions in busy areas. Kareem Omotosho, a resident of Adekunle area of Yaba, who said he is involved in the practice said they use T-junctions because a lot of people from different directions, pass through these junctions and because of its spiritual connotations.

"If you notice, you always find them at T-junctions, especially where people used to pass very well. The thing is that sometimes when somebody is very sick or has some problem and they notice that it was caused by a witch, the native doctor will do it for them and they will carry it and go and keep it at the junction. They said the problem will transfer to the first person that sees the sacrifice. But it does not work sometimes," Mr. Omotosho said.

A native doctor at Adekunle, Yaba, who identified himself simply as Baba Oye, and was reluctant to speak to NEXT, however confirmed that the bowls of sacrifice are sometimes meant to transfer a person's problem to another. He, however, said that many of the ones done in Lagos have little or no power compared to the ones in the rural areas. He also said that some fraudsters use it to rip some people seeking spiritual help.

Day in, day out fetish practices are carried out at most of the beaches in Lagos, particularly Bar Beach which overlooks the corporate commercial district of Victoria Island. Even the ivory towers are not immuned from cases of ritual practices, especially among lecturers, in a bid to outdo one another in the tussle for positions. It would be recalled that for weeks last year, people were scared away from the office of the Vice Chancellor of the Lagos State University, which was sealed with a string of palm front and pieces of red clothes and other fetish materials.

After onlookers had come to her rescue, the girl selling akara at Alausa found courage and replied the old man who had been raining curses on her, in pidgin. "God forbid. Na your family no go born for their life," she said. This, perhaps, explains why Mr. Adekeye concluded that the practice may afterall be merely psychological and targeted at exploiting people's fear of the unknown
.

Comment by SaintOkocha on August 4, 2010 at 9:38am
Please, Everybody let's bahave like Kayode who normally croo over at the sight of the clay pot from afar. Don't presume it's not harmful.
Remember all Lizards prostrate......You do not know the one that could be harmful.