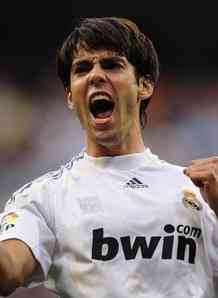 Kaka, who moved to the Santiago Bernabeu in a £59 million move, has failed to hit the heights expected of him since his summer move to Spain from Italy.

But with Sunday's clash with Osasuna on the horizon, the former AC Milan maestro has declared himself fit for the weekend fixture and keen to prove his worth to Real in the second half of the season as they look to close the gap on Barca at the top of the Primera Division.

Cured
"I am totally cured," said the Brazilian. "I am good, I don't have any more pain in the pubis.

"I hope to work with the group at my top this week and get myself good physically."

Real have won all four of their matches in Kaka's absence and it remains to be seen if Manuel Pellegrini will shuffle his pack to accommodate the former world player of the year for the trip to Osasuna.

Kaka's spell on the sidelines has allowed the midfielder to look ahead to the 2010 World Cup where Brazil are bidding to win an unprecedented sixth trophy.

But the playmaker called on his team-mates to have extra focus in their preparation for the South Africa tournament after off-field issues aided their early exit to France in the quarter-finals of the 2006 World Cup.

"We will need to use the two weeks we will have before the World Cup to practice properly, to gain tranquillity and to think about getting focused," Kaka told the Estado de S. Paulo.

"It's going to be key for the team to arrive with winning chances."

Comment by Moses K Tawose on December 29, 2009 at 2:07pm
Welcome back and be careful as you take it easy on yourself. Your team and fans need you for your contribution to made successful.