Obalende is known for heavy traffic of people and vehicles. Barely 10 metres from him were two police officers directing traffic. When asked why the man was left unattended, a female officer, who refused to give her name, said, "I don't know. He was there when I resumed duty at 4 o'clock."

The gate of the Nigeria Police Headquarters annex, Kam Salem House, on Moloney Street, was about 30 metres from the man's unconscious body. 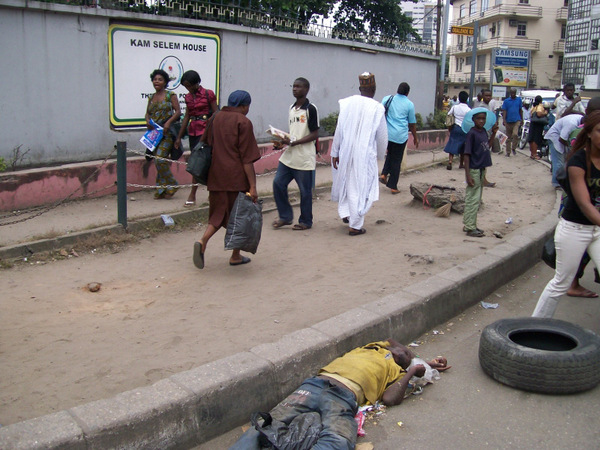 A passer-by, Seth Orok, said the police should have taken the man to a hospital.

"Even if he is mad, he is still somebody's relative," he said. "The police are supposed to protect us, including this man. It's bad."

"That is what has become of Nigeria," said Kingsley Abayomi, a bank employee on his way home. "Nobody cares for anybody anymore. If it was before, that man would have been moved many hours ago. I saw him there at 12:30. It's almost six now and he's still there."

It's a body again

This kind of case is becoming familiar. On January 16, 2009, Kolawole Balogun, a casual worker with Grinaker LTA construction company on Victoria Island, Lagos, slumped and died in front of Kam Salem House. For two hours, his corpse was there. None of the officers on duty offered to help move it. Later, a group of his colleagues had to pay a commercial bus to take the body home.

Comment by abigail edward on August 20, 2009 at 10:34am
incredible situation! only God we give us the heart 2 help ourselves cos the bad people have spolt the good ones God save our people.

Comment by eucharia ukoha on August 18, 2009 at 3:41pm
lets remember d story of d good samaritan in the bible. do unto others wat u want them to do to you.the so called workers going to work wud hav helped especially if they have a car nd the stupid nigeria police force shud be scrapped.lets learn to help others in need. it can be any body

Comment by Omogoroye Festus on August 18, 2009 at 2:06pm
Let us of us put in mind that all the struggle of man on earth we end one day. What ever you sow you shall reap. Many people have the mind to help him, but there fair implication.

Comment by Yinka Akinnadeju on August 17, 2009 at 2:46pm
This is a very bad case, no one to help each other anymore may God save us.

Comment by COLLINS on August 17, 2009 at 7:19am
Our society is turning to animal kingdom we dont have feeling for our fellow human being as if it is not the same blood that is flowing through our veins. Yet every friday saturday and sunday we all troop out in en masse to our respective place of worship and start praying for Gods salvation and his mercy. We fail to realize that LOVE is the greatest of everything we do if we show love God will give us everything we ask.

Comment by Igboba .C. Veronica on August 17, 2009 at 6:44am
Dats unfair, at least those who were going to work should have stop and help the poor guy. Nigerians are always afraid to help, but they can spend there money on unecessary things. Thats unfair we Nigerians should be our brothers keepers.

Comment by ifee on August 16, 2009 at 9:49pm
Lets not be hypocrites..how many of us will have stoped in our fancy cars,put the man in the back seat to take him to the hospital without being scared that he may die on us and we will be labeled a kidnapper,ritualist or simply murderer??The soceity we live in has made all of us real sceptics and only interested on our own survival!

Comment by John kaluson on August 16, 2009 at 12:38pm
Please the western world should not see these kind of things. many people were passing by seeing the man there, nobody cares where are we heading to? Can anything good comes out from Nigeria? Those of us living abraod can we really have cofidence, to return fully back to Nigeria? our mother´s land with these kind condition on the ground. No police man cares about the situation, any well Lagos is called no man´s land, and Nigeria as whole is a lawless country.we need God´s deliverance

Comment by Chika Uche Dudu on August 16, 2009 at 12:15pm
This is the bad side of nigeria, How can person die when there is somebody to help save that persons life? this is very bad, that is why i like here abroad,

Comment by Muyiwa Mayowa Osibolu on August 16, 2009 at 1:34am
The society is hostile and it affects all aspects the country. Its unfortunate that the man died. May his soul rest in peace.