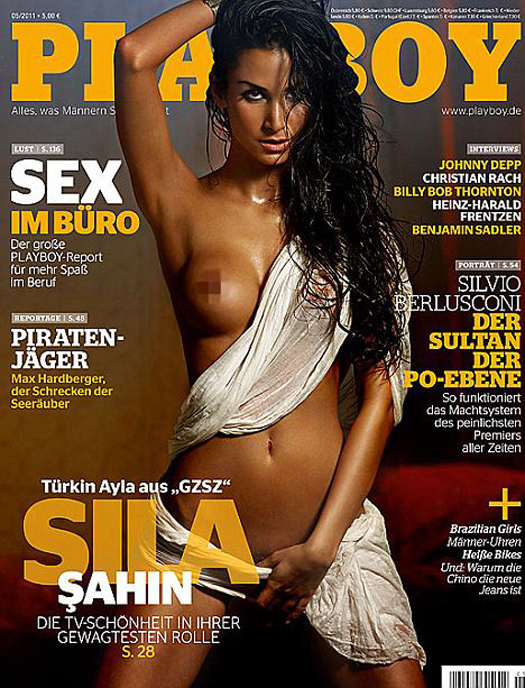 Sila, raised in Germany by conservative Turkish parents, says she fears being
"spat at" and "shamed".

Her parents are said to have reacted with "horror" at the 12-page coverage,
and her mother has apparently cut off all contact.

Sila, 25 - star of German soap Good Times, Bad Times - claimed the shoot was a
reaction to the "slavery" of her youth.

She added: "What I want to say with these photos is, 'Girls, we don't have to
live according to the rules imposed upon us'.

"For years I subordinated myself to various societal constraints. The Playboy
photo shoot was a total act of liberation."

But Islamic internet sites are being monitored by the BND - the German
intelligence agency - after threats were posted about her "shaming Muslim
womanhood" and "prostituting herself for money".

One poster on the Jihad Watch website wrote: "She needs to be very careful..."
Another simply said: "She must pay."

A kebab shop owner, asked on German TV what he would do if Sila were his
daughter, replied: "I would kill her. I really mean that. That doesn't fit
with my culture."

The Islamic Community of Germany has called for a boycott of Sila.

About three million Muslim immigrants live in Germany, which has seen numerous
honour killings in recent years by fanatical husbands, fathers and brothers.

In 2009, an asylum seeker was sentenced to life after killing his "too
independent" German wife.

One police intelligence officer said of Sila: "I think what she did was either
very brave, or very stupid.She will be double-locking her door at night for
a long time to come."

You can see the signs of the end time.may the Lord deliver us from this wicked generation.

Comment by Anionwe Nathaniel on May 10, 2011 at 5:45pm
This says alot about humans generally

omo na wa,call me old school, but don't don't piss and call it rain,i don't get how posing nude would help in abolition the so called slavery or inhibitions she experienced due to her cultural and religious back ground.come to think of it is education not suppose to be the key to the emancipation of the mind. things we do for money or is it fame?.

what she has managed to achieve is just a pocket full of euros to spend on a shopping spree, some fame and heart broken loved ones, i wouldn't want to be in the shoes of any of her relatives,to think all her parents must have sacrificed for her to be educated.funny i know a million and one girls all around the world that would gladly give their right arms to have the opportunities she had coming from the same back ground she so much hate.