In one blog he says: "loneliness leads me to other problems".

Photos of the Abdulmutallab appeared on ABC News in the US.

A six-inch long packet of the high explosive chemical called PETN - weighing about 80 grams - was sewn into the crotch of the underwear.

A government test with 50 grams of PETN blew a hole in the side of an airliner. That was the amount in the bomb carried by the so-called shoe bomber Richard Reid over Christmas 2001.

The underpants bomb would have been one and a half times as powerful.

Abdulmutallab allegedly attempted to detonate the device as the plane came in to land at Detroit airport.

A second picture showed the burnt and melted syringe which would have been used to ignite the device. Al-Qaeda admitted last night that it was behind the Christmas Day attempt to blow the American airliner.

Terror chiefs bragged that Abdulmutallab, a London-educated Nigerian, was a "martyrdom-seeking brother" who "reached his target".

They said he failed because "a technical fault occurred leading to a lack of complete explosion".

But they warned of atrocities and called on Islamists to attack Western embassies.

Last night federal intelligence officials were reviewing the internet postings believed to have been written by Abdulmutallab, said the Washington Post.

The newspaper, which has reviewed the postings reported that farouk 1986 (a combination of his middle name and his birth year) searched for friends online through Facebook and in Islamic chat rooms.

In one such posting he wrote: "My name is Umar but you can call me Farouk." 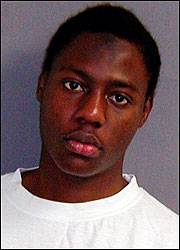 A posting from January 2005, when he was attending boarding school, read: "I have no one to speak to. No one to consult, no one to support me and I feel depressed and lonely. I do not know what to do. And then I think this loneliness leads me to other problems."

In a June 2005 posting, when Mr Abdulmutallab is now known to have been in Yemen, farouk1986 wrote that he was in Yemen for a three-month Arabic course, saying that "it is just great" and raving about about the capital's shopping and restaurants, including Pizza Hut and KFC.

As a student at the British boarding school in Togo, Farouk1986 wrote that he was lonely because there were few other Muslims.


He said: "I'm active, I socialise with everybody around me, no conflicts, I laugh and joke but not excessively," he wrote in one posting.

In the same posting he also wrote about desire and marriage, saying that at 18 he was not yet ready for it.

"The Prophet advised young men to fast if they can't get married but it has not been helping me much and I seriously don't want to wait for years before I get married," he wrote.

He said he had not started searching for partners because of social norms such as having "a degree, a job, a house, etc. before getting married."

But, he said, "my parents I know could help me financially should I get married, even though I think they are also not going to be in favour of early marriage."

He also wrote of his "dilemma between liberalism and extremism" as a Muslim.

He wrote in 2005: "The Prophet said religion is easy and anyone who tries to overburden themselves will find it hard and will not be able to continue".

Comment by Daniel Danquah Damptey on December 30, 2009 at 7:03pm
I appeal to my fanatical muslim brothers not to go to such extremes. The passengers aboard the plane are ordinary people, created in the image of God. What have they done to you that you will decide to blow up the plane and get all of them killed? Such people might not have a hand in formulating policies that our muslim brethren might consider to be detrimental to the cause of Islam.

Comment by Moses K Tawose on December 30, 2009 at 1:37pm
Many things has been said already, but we must realize that it takes a community to raise a child. Yes much is in the hand of the parent, but they cannot and the lapses is what is evidence here. Many things has been written and said, but if they were carefully look into we would see that he was lonely.
Its not easy to be up there without a fall out especially in the upper class. They're secluded from the reality of life with a few friends and fit in are almost impossible which was the reason for him going out to look for people of his peers whereby he took the wrong steps and humpty dumpty had a great fall.
It has been discovered that Nigerians in general love lives and this is evidence in his act that he cannot fully goes through with it. He didn't thought it through in the first place and when he did realized it was too late and he doesn't want to be a chicken was why he did at all.
This isn't a religious thing so let us not put sentiment in it to create another palaver that we wouldn't able to put back into the wine bottle. The boy need to be prayed for and his family. He has brought the honor of the family to the ground by his act.
Its also a lesson for all the rich people in the country to know that they has a lot of job to do on their siblings and the community. Money is not all..................!!!

Comment by susan roces poe on December 30, 2009 at 1:21pm
INFACT IT IS ONLY GOD THAT SAVE THE FLIGHT AND THE PASSENGERS BECAUSE IT WAS A DAY OF CELEBRATION OF THE BIRTH OF HIS SON JESUS CHRIST .
THIS IS TO TELL AND SHOW THE WHOLE WORLD THAT GOD IN HEVEN HONOURS CHRISTMAS WHICH IS THE BIRTHDAY OF JESUS CHRIST .
GOD DONT WANT HIS CHILDREN TO CELEBRATE CHRISTMAS WITH TEARS, SO LET US THANK GOD.
AS WELL I THANK GOD THAT THE BOMBER IS NOT FROM SOUTH EAST OR SOUTH SOUTH, IF NOT IT WOULD HAVE COST DEPORTATION FOR THOSE IN ABOARD OR A LAW DEGREE AGAINST THOSE IN NIGERIA .
AGAIN PRESIDENT BARRACK OBAMA SHOULD BE GREATFUL AND THANKFUL TO GOD FOR SAVING AMERICAN IN TWO PLANE DISASTERS THIS YEAR , 15TH JAN CRASH HUDSON RIVER NY AND 25TH DEC 2009 .
SO LET THE AMERICANS AND THE WORLD PRAISE GOD THROUGH JESUS CHRIST AMENNNNNNNNNN !

Comment by Holawalay Dedon on December 30, 2009 at 12:35pm
Everyone should stop this negatvie comment on this Young man, neither am i in support of his act, but i am sure Faruk is a good boy something just went wrong some where which i know most of you dropping this abuse could also fell for, i am very sure he is young and naive which he must have been brain washed.... its so difficult for anyone to go against a perfect brain wash by this Al quada ...i have watched, listend to comment about him from his past relationship with people and non said anything negative about him while growing...well i hope the US will do an intensive investigation on this young boy to know what is the source of is act, as we all know he couldnt even detonate the bomb which means he is not in is right stare of mind...please save any abuse for now...and this is not even about Nigeria..but a young boy that fall into a wrong hand which i still strongly believe he is been brain washed.....

Delete updated their profile
5 hours ago