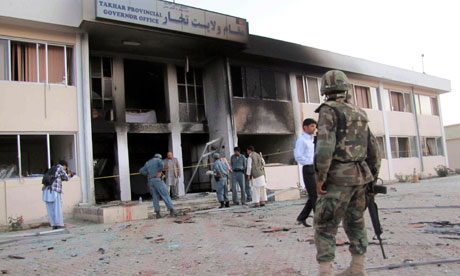 Bomber in police uniform targets provincial governor's office killing a police chief and injuring several others
Afghan policemen inspect the outside of the governor office in Takhar province. Photograph: Wahdat Afghan/Reuters
A Taliban suicide bomber attacked a provincial governor's compound in Takhar, killing the police chief of northern Afghanistan and seriously injuring a top Nato commander. Two other Afghan officials were also reported to have died in the attack. Several international servicemen were reported injured by eyewitnesses.
German officials confirmed to Spiegel magazine Major General Markus Kneip, who commands Nato forces in the north Afghanistan, had received wounds that were "severe" but not life-threatening.
A Nato spokesman in Kabul confirmed western casualties but was unable to provide details.
The Taliban, meanwhile, claimed responsibility for the attack and pledged that "killing high ranking officials will continue."

Mujeebullah Rahman, the deputy director of the local council in Takhar province, said the attack took place at about 4pm when a meeting to discuss local security operations was ending.
"The bomber was waiting in the corridor, wearing the uniform of an Afghan policeman," Rahman said.
The attack capped a bloody 48 hours in which seven Americans, two British and two other Nato servicemen were killed by roadside bombs or by insurgents in the south of the country. So far 44 Nato soldiers have been killed this month, and .nearly 200 have died in the year.
The British servicemen, from 42 Royal Marine Commando, were on patrol when a hidden explosive device was triggered. However, the Takhar attack was more audacious.
The German general may have been specifically targeted as he commands a zone which has seen a high number of special forces operations against insurgents in recent months. But the main target may have been General Mohammed Daoud Daoud. He served as a deputy interior minister for narcotics before being posted as police chief in the north, and was also the former bodyguard of the legendary guerilla leader Ahmed Shah Massod who was killed by suicide bombers in 2001.
Targeting high profile figures has long been an aim of the insurgents, for having a major propaganda impact overseas.
The fighting this year is seen as a key test of strength as it comes against a background of US decisions about troop withdrawals this summer, the death of Osama bin Laden and tentative moves to find some kind of political settlement to the conflict, now in its tenth year.