Nigerian Ambassador to Kenya Beats Wife to a Bloody Pulp

as they say in naija beat her to nonsense or beat am shege ! These pictures are scary ! His name is  Chiojoke Wilcox Wigue, High Commissioner / Ambassador Extraordinary and Plenipotentiary of the Federal Republic of Nigeria to the Republic of Kenya. Information emanating from Kenya reveals that he is serial wife beater; pictures published by a Kenya newspaper (The Star) reveal that the high commissioner publicly battered his wife(Teresa), with whom he has

seven children, and many grand children. The gory pictures as published, shows the wife’s stitched face covered in blood.

However, the Kenyan police authorities are considering revoking his diplomatic immunity, so he can be charged. 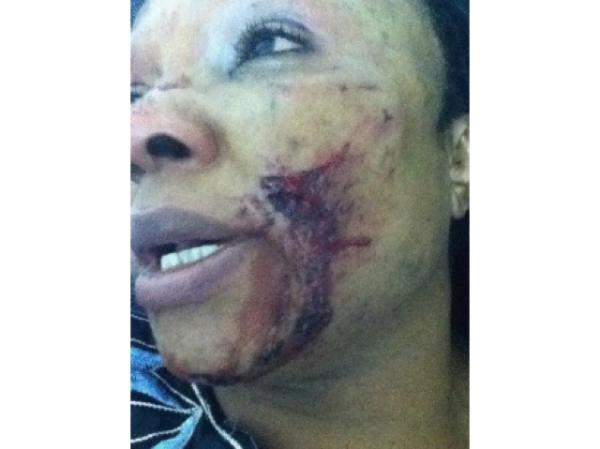 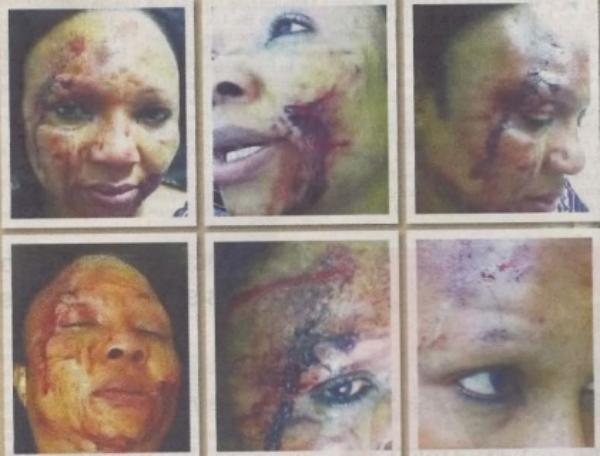 THE wife of the Nigerian High Commissioner has written the Police Commissioner Mathew Iteere asking him to arrest the diplomat for assaulting her. Mrs Tess Iyi Wigwe accuses her husband Chief Dr Chijioke Wilcox Wigwe of  causing her serious bodily harm.

Wigwe is the High Commissioner to Kenya and the Seychelles. He is also the permanent representative of Nigeria to the United Nations Environmental Programme and the UN Habitat in Nairobi.

In a short biography Wigwe is described as a devoted lover of music of all kinds and genre ranging from Classical to New Age. "He enjoys singing and dancing, is an avid reader, writer of short poems, an art and opera lover with other interests including bird and aircraft- watching".

Yesterday Wigwe denied battering his wife. He expressed shock that the police had been asked to arrest him. "I am shocked about her actions. They have not notified me of any plot against me. I have just arrived from a foreign trip," he told the Star.

A letter from lawyer Judy Thongori to Iteere dated Monday (May 23) says Tess sustained injuries on the face, neck, fingers and spine after a quarrel which resulted in the beating on May 11.

In an exclusive interview with the Star yesterday, Tess said she was rescued by her 20-year-old son and 23-year-old daughter who rushed her to hospital while bleeding profusely.

The diplomat’s wife said she was admitted to the Aga Khan Hospital, Nairobi, on May 11, operated on and discharged on Sunday, May 15. "I am still living in the ambassador’s residence. I still feel a lot of pain from the injuries despite the ongoing medications,” she said, adding that she had been advised by her doctors to be careful as the injuries to her lower back might lead to paralysis.

Tess, herself a lawyer with dual British and Nigerian citizenships, said she had suffered previous beatings by her husband during their long marriage. The couple has five children — four boys and a girl aged between 32 and 20 years. They have five grandchildren.

Tess said she had in 1999 left her husband due to his womanising and frequent beatings and went to live in the UK where she got a job. She claimed that he had two traditional marriages with two women during their separation.

Tess said he pleaded with her to join him when he got his posting to Nairobi in 2008. "I thought he had changed his ways and l was prevailed upon by the community to join him," she told the Star.

Wigwe reported to his new station in May 2008 but Tess only joined him months later because she had to get a leave of absence from her employer in the UK. Tess said he beat up her in October that year when she questioned him about bringing strange women to their matrimonial home.

She said she kept the matter quiet but the relationship has become so bad that they have reached a point where he communicates with her by writing and leaving her notes. "This time, he left a note about his dinner. I told him his dinner was ready and asked him not to be asking for dinner to be prepared if he was not going to eat it. He grabbed me by the hand and when l tried to pull away, he hurled me against the wall before he started punching me," she said.

Tess said she has opted to come out and explain her situation to show that domestic violence cuts across cultures, education and social standing. "I cannot keep quiet. I have kept quiet long enough," Tess said.

Yesterday lawyer Thongori who is acting on behalf of Tess said they would demand that Wigwe's diplomatic immunity be lifted so that he could be prosecuted. “Though Dr Chijioke Wilcox Wigwe is a diplomat, we are of the considered view that any diplomatic immunity that he enjoys is subject to him upholding and respecting the fundamental rights of others as enshrined in the Constitution,” Thongori said in her letter to Iteere citing the rights which include freedom from torture, freedom from cruel and inhuman treatment.

Thongori told the Commissioner that her client wants her husband prosecuted. “We have instructions to demand the immediate prosecution of the husband in accordance with the law,” lawyer Thongori says in the letter.

No arrest can be made at the High Commission residence or offices of the embassy as they are considered the territory of the Federal Republic of Nigeria.

If this is an Alegation as the High Commision has said then His Kids REALLY REALLY HATE HIM or they could not even recognise their own Father .

Ambassador Wigwe is taking relations between Nigeria and Kenya and Nigeria and Seychelles respectively to new heights with the submission of a number of bilateral agreements to the two countries. In September 2008, he succeeded in taking Nigeria to the Nairobi International Trade Fair after 10 years of absence. Nigeria also took part in the 2009 Nairobi International Trade Fair during which the High Commission received first prize for The Best Medium Foreign Government Stand and second prize for The Best Foreign Private Stand.

A devoted lover of music of all kinds and genre ranging from Classical to New Age, Ambassador Wigwe enjoys singing and dancing. His favourite artistes include Fela Anikulapo Kuti, Franco, Enya, Barry White, Bob Dylan, Bob Marley and Michael Jackson. He is an avid reader and a compelling writer. In his spare time he tries his hand at writing short poems. He loves the arts and enjoys going to the opera. His other interests include bird-watching as well as aircraft- watching.

Ambassador Wigwe was born, the third child of Elder Jephtah Walozie Wigwe and Sarah Wigwe (nee Akarahu), in a family of eleven, on 6 June 1951 in Aba, Abia State, South eastern Nigeria. He is married, has seven children and is blessed with grand-children.

Comment by mohammed ojobarp bakare on May 31, 2011 at 5:46pm
This animal called Ambassador Wilcox

wow!i dont knw what to say,a father and a grandfather?still doin this! may God help us.

Comment by Justchyke on May 30, 2011 at 1:31pm
Confirm ur stories before sharing with the public ... so paparazzi was waiting to give her snap shots while the beating was going on and after the beating, she was not even crying but decided to pose for some press pics rather than rush off to treat herself.

Comment by GBAAKON TERHEMBA on May 30, 2011 at 3:31am
this calls 4 proper investigation by the Nigerian govt! if found guilty let the law take its course. this will deter some of the grand pals from tysoning their wifes at dat level of leadership and societer attainment in life! its sad, but i think der is more to it which is untold.sure the man is consious of tne fact that he has such adults as his children living with him. mind u, the allegiance of the children is always devided bw the parents. t4 the mother must also be protected at any point in time by this children,well, lets keep our fingers cross to see wat happens eventually.

Comment by Ajealamonia Dick on May 29, 2011 at 9:29am
A scandal of this proportion must be investigated by the Nigeria govt.

Comment by Chikodinaka on May 28, 2011 at 2:19pm
As w woman, i have no excuse for domestic violence. but a frame up may be another thing. i believe hungry and desperate lawyers were involved. if this story is not consciously intended to defame, why take all this trouble to pose for photos? she may have actually taken herself the pictures.... i bet you!!!! there is more to this story. one picture has lighter blood. was it cleaned up a little? please look closer. whatever be the case, no man must beat his wife, nor vice versa. but know the details before you condemn. the media has been known to once a while carry frame ups! its not impossible, except you tell me that all that the media carries is at all times perfectly true. look, listen, investigate before u make ur comments!

Comment by Chikodinaka on May 28, 2011 at 2:11pm
have a close look at these pictures. the injury above her eye brow is absent in one of the pictures, the last one. where did that injury disapear to?

Comment by abiodun oluwafemi falusi on May 28, 2011 at 1:59pm
we cant call him man is and big animal