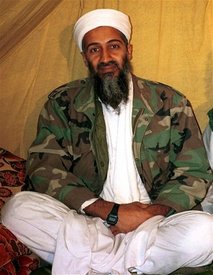 ‘I’ve Got to Step Up My Game,’ Says Madman

In a new video that is light on his usual threats but heavy on admiration, Osama bin Laden admits that he is
“professionally envious” of oil giant BP’s massive oil spill, saying
that it puts his efforts to create destruction and chaos to shame.

“There are times in an evildoer’s life when one has to stand back and
admire a job well done,” Mr. bin Laden says in the video. “BP, you blow
me away.”

The Al-Qaeda mastermind adds that his first thought upon seeing BP’s
spill was, “Man, I’ve got to step up my game.”

Mr. bin Laden claims in the video that he rarely feels envious towards
other evildoers, but says he likes “to use that energy to push myself to
be the best terrorist I can be.”

As for the envy he felt after seeing BP’s handiwork, the madman says, “I
haven’t felt this way since the whole Toyota thing.” More Borowitz
here..

Comment by SaintOkocha on May 31, 2010 at 9:14am
Quite Nonesensical, So useless.
If he says life is a game let him come out and play it.