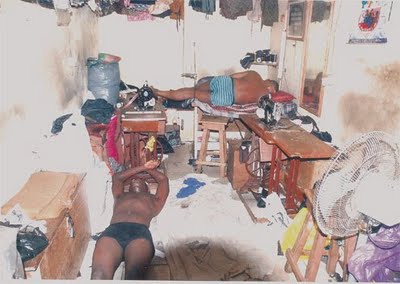 The police in Lagos State, are trying to unravel how 29-year old Apatira Babatunde Abiodun and 30-year old Oluseyi Taiwo Abbey died at the weekend inside a tailor’s shop in mysterious circumstances.

It was gathered that the two friends were found dead at the weekend in a shop located at No 70, Ajeniya Street, Obalende, Lagos Island with blood stains in their mouths. Eye witnesses said they might have been poisoned.


Neighbours narrated that Abiodun and Abbey had gone to relax in the neighbourhood in the evening and returned to the shop where they usually sleep late in the night before they were discovered dead the following morning.

“The two of them were very good friends and they had been sleeping together for long. I was surprised the following morning when some people came shouting at my door to come out and see my son, and on getting there, I met the two of them dead with blood and foam coming out from their mouths.

“Now, nobody really knows where they went that night. I have left everything to Allah because he gives and he takes,” Sakirudeen Apatira, a printer and father of Abiodun said.

“I am still in shock over the sudden death of my son who was hail and hearty the night before the incident. My son and his friend told me they were going out in the evening of the previous day and when they came back, they also came to greet me and told me that they were back and were going to sleep,” he added.

The strange incident threw the whole area into confusion as onlookers gathered on Odo, Moshalasi and Toyan Streets to find answer to what might have led to the death of the two young men they all knew.

Biodun has been buried at Ikoyi Cemetery while Abbey has been taken to the mortuary by Onikan Police officers who are still investigating the matter.

Comment by ologbenla adebowale on May 30, 2011 at 2:20pm
it is a case of poisoning period and we all know the police will not investigate anything unless the family want to entertain the police

Comment by Moses K Tawose on May 27, 2011 at 1:25pm
As mysterious as the death was it can be methodically solved scientifically. I do believe that they were poisoned from where they went the night before. May their soul rest in perfect peace.