Sunday Sermon: Meditation: What Is It? 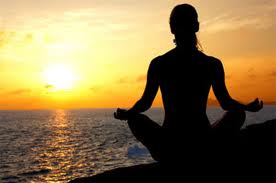 How does Christian meditation compare with other forms of meditation?

There are two major differences, however, between traditional forms of meditation and Christian meditation.

During the practice of meditation, the non-christian strives to clear his or her consciousness of all thoughts, concentrating intensely until in a prescribed period of time a bare minimum of thoughts has been allowed or entertained in the consciousness. Often, a tool called a mantra is used which may be a word or a series of sounds that a person repeats continually until they are completely empty. This is supposed to achieve the ultimate relaxation and cessation of stress. When the meditator wants to obtain peace in the midst of a tumultuous situation he or she can just call to mind or repeat the mantra and the desired result is obtained.

In Christian meditation, the believer seeks to fill his or her thoughts with truths about God. Christians can achieve this by focusing on the Word of God, as the psalmist said: "But his delight is in the law of the LORD, and on his law he meditates day and night" (Psalms 1:2). Rather than emptying himself, the Christian fills his mind with hope and encouragement from the promises that God has given in His Word or on good things that God has done for him. Or he may simply just think on the wonder and awe of God. In so doing, the believer is assured of peace.

In seeking to reach one's higher self, the traditional meditator may achieve his goal, but has really achieved a state which has no real value. At the pinnacle of his self every individual is but base and low, since all are sinners. "For all have sinned and fall short of the glory of God (Romans 3:23). Therefore there is no perfection to be obtained from within. Paul rightly said in his epistle to the Romans, "I know that nothing good lives in me…" (Romans 7:18).

Jesus Christ alone is our source of righteousness and, therefore, peace. Seeking to reach one's higher self is to reach for nothing; it may achieve a state of thoughtlessness and cessation from stress, but the individual will still remain empty and unfulfilled. The only path to peace and fulfillment is through God. If an individual, with purpose and intent, will meditate on God, he will achieve the highest of heights, including joy and peace. "You will keep in perfect peace him whose mind is steadfast, because he trusts in you" (Isaiah 26:3). .

Meditation: What Is It?
Meditation is a popular subject these days. With a renewed emphasis on spiritualism and alternative medicine, meditation has gained popularity. Yet, depending on the context, meditation can be defined in a variety of ways. Quite simply, meditation is defined as reflecting and contemplating. It makes no value statement any more than thinking or dreaming does. The subject of a person's meditation is what brings value to the act of meditating.

Meditation: Who Does It?
Meditation is generally seen as a practice of the New Age movement. This comes primarily from the movement's association with Transcendental Meditation. Transcendental Meditation (TM) was developed by the Maharishi Mahesh Yogi of the Hindu religion. On their website, TM is described as "a simple, natural, effortless procedure…. During this technique, the individual's awareness settles down and experiences a unique state of restful alertness. As the body becomes deeply relaxed, the mind transcends all mental activity to experience the simplest form of awareness, Transcendental Consciousness, where consciousness is open to itself" (www.tm.org). The site touts the benefits of TM as enhancing creativity, effectiveness, and success. The site goes on to say that people from any age, background, or religion can practice TM.

However, TM is steeped in Hindu philosophy. The "yogi" in the TM founder's name indicates his status in Hinduism. The philosophy and benefits behind TM are similar with Hinduism's practice that seeks to bring people into union with one's "higher self." Additionally, courts in the U.S. have ruled that TM is not a secular discipline; it is Hindu religion (U.S. District Court, Newark, NJ, on October 29, 1977, and the U.S. Court of Appeals, Philadelphia, PA February 2, 1979.)

Meditation: Is It Biblical?
Not all meditation is Transcendental Meditation. In fact, the Biblecommands us to meditate. In Joshua 1:8, God tells us to meditate on His word day and night so we will obey it. The words, "meditate" or "meditation" are mentioned 20 times. But meditation's association with New Age philosophy and Eastern mysticism has frightened off many Christians.

In the Old Testament there are two primary Hebrew words for meditation.Haga, which means to utter, groan, meditate, or ponder. Sihach, which means to muse, rehearse in one's mind, or contemplate. These words can also be translated as dwell, diligently consider, and heed.

Meditation: A History
One form of meditation that has been used by Christians since at least the 4th century is the lectio divina. It has been traditionally used in monastic religious orders and is enjoying a resurgence today. Lectio divina means "sacred reading" and has four stages: lectio (reading), meditatio(discursive meditation), oratio (effective prayer), and contemplatio(contemplation). In the lectio (reading) stage, one finds a passage and reads it deliberately. The next stage, meditatio (discursive meditation), is where one ponders the text. In the oratio (effective prayer) stage, one talks to God about the reading, asking Him to reveal the truth. In the final,contemplatio (contemplation) stage, one simply rests in God's presence.

As we can see, meditation is simply pondering or thinking over something. The subject of a person's meditation, and the purpose of the meditation, is what differentiates one kind of meditation from another.

What we choose to dwell on and focus our thoughts on make a profound difference in our outlook on life. To find out more on how to focus on "whatever is true, whatever is honorable, whatever is right, whatever is pure, whatever is lovely, whatever is of good repute, if there is any excellence and if anything worthy of praise, dwell on these things" (Philippians 4:8, NASB),